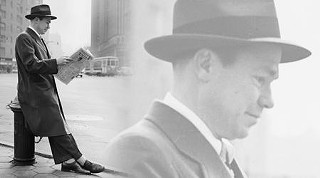 The statue will be based on this historical photo

Oscar-winning lyricist John Herndon Mercer may have found fame and fortune in Hollywood and New York City, but he never forgot his hometown.

Mercer was born in Savannah in 1909 and his body was returned here after his death in 1976. He was buried in Bonaventure Cemetery, where his grave has proved to be a tourist attraction.

In the not-too-distant future, a bronze statue of Johnny Mercer will grace Ellis Square. It, too, is expected to become a tourist attraction, as is all of the redeveloped Ellis Square.

"The Ellis Square area is shaping up as an exciting new addition to the city," City Manager Michael Brown said. "The square plan is really based on a much more active version of our other squares.

"We have a lot of nice squares, but they’re tranquil," Brown said. "This square will be tranquil, but it will provide a lot of things to do."

Ellis Square is the perfect spot for the memorial, which will show Mercer seated on a fireplug, reading a newspaper, Brown said. "It’s a very creative and entertaining design," he said.

The statue is being created by Savannah sculptor Susie Chisholm in her City Market studio, and could be cast as early as April 25. The image is based on a photograph of Mercer.

Dianne S. Thurman, co-chair of the Friends of Johnny Mercer, Inc.’s statue committee, said the committee has worked very hard for a number of years to make the dream a reality. "Johnny Mercer, in my estimation, was the original goodwill ambassador for the city of Savannah," she said.

"Johnny Mercer was green before it was cool to be green," Thurman said. "During the war years, when shellac was needed for the war effort, he was recycling records to make new records."

Thurman also is the chair of the mayor’s Johnny Mercer Centennial Steering Committee. A year of events are under way in honor of the 100th anniversary of Mercer’s birth.

"We’re going from the past into the future," Thurman said. "This entire year we are honoring this great Savannahian, this very talented man."

Inquiries have come from as far England, Ireland, France, Holland and all around the United States, Thurman said. Both cutlural and educational organizations are putting on performances and other events in honor of Mercer’s memory.

The Savannah City Council voted April 8 to approve the location of the statue in Ellis Square. "I think this is so appropriate," said Alderwoman Edna Jackson, in making a motion to approve the ordinance. "This is really going to do something for Ellis Square and that general area."

Alderman Jeff Felser commended the Friends. "Yours is probably one of the groups that gets the smallest amount of money from us, yet you’re proposing and coming up with funding ability to put up a life-sized statue that probably will be one of the most photographed statues in Savannah," he said. "I hope and pray we can keep it safe and clean and appropriately displayed."

The statue will be dedicated on Nov. 18, on what would have been Mercer’s 100th birthday. Music company executives from New York, Hollywood and London have already confirmed their attendance.

The Metropolitan Planning Commission recommended that the statue be placed in the west quadrant of Ellis Square, positioned along the walkway. Both the MPC Technical Advisory Committee and Sites and Monuments Commission had to approve the site before an ordinance could be taken to the city council.

"It is the rare, once-in-a-lifetime opportunity that I have to be involved with the Johnny Mercer Centennial, and also to help bring this Johnny Mercer statue to reality," Thurman said. "Personal donations and community support have made this possible. I am truly grateful for Mayor Johnson’s and City Council’s unanimous and heartfelt vote of approval."

Nancy Mercer Girard, Mercer’s niece, also is co-chair of the statue committee. "I called him Uncle Bubba," she said, adding that was what Mercer’s family called him.

"I believe Uncle Bubba would be very happy to be, yet again, greeting Savannahians and City Market visitors to the square," Gerard said. "I can envision friends getting together for lunch or dinner, and saying, ‘Where do you want to meet?’ and the reply will be, ‘Let’s meet at Johnny,’ in Ellis Square.

"Johnny Mercer dearly loved his hometown," she said. "How fitting it is that the Mercer statue will reside in Savannah’s newly constructed Ellis Square, with new vibrancy for new generations, and Johnny is a part of it."