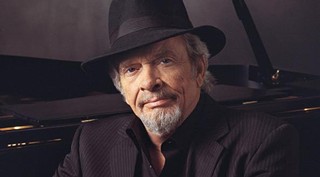 Merle Haggard: "If it never happened again, if they turned the lights out this minute, it's been the greatest trip in the world."

One of the great misconceptions about Merle Haggard – who comes to the Johnny Mercer Theatre Jan. 29 – is that he was a right–wing, straight–arrow conservative hippie–basher at the turbulent end of the 1960s. To this day, Hag – who is, to be sure, an opinionated man and only too happy to tell you what he thinks – is asked by clueless “journalists” about American politics.

All because of “Okie From Muskogee,” a song Haggard wrote, in less than 10 minutes, while passing through a small Oklahoma town on his tour bus in 1969.

He made it all up. Coming up with lines like “Football’s still the roughest thing on campus/And kids here still respect the college dean” made him laugh, and made his band members laugh, but when the song became a chart–topping, award–winning, career–defining smash, Haggard found himself the poster boy for good old American values.

For goodness’ sake, the man wrote “Workin’ Man Blues,” “Mama Tried,” “Today I Started Loving You Again,” “Are the Good Times Really Over,” “If We Make it Through December” and a dozen more of the greatest country songs in history.

The 73–year–old native of Oildale, Calif. is an icon, a trailblazer, a legend. He is still the most imitated singer in country. President Obama gave him the Kennedy Center Honor last month, alongside Paul McCartney and Oprah Winfrey.

Here are a few comments from an extensive interview I did with him in 1999. Hag discusses his earliest musical loves, his short stint as an inmate at San Quentin in the early ‘60s, his feelings on contemporary country music ... and how he turned ‘Okie From Muskogee’ to his advantage.

“My mother would’ve said ‘Tennessee Ernie has a much better voice than Lefty Frizzell.’ I was pretty sure that most people probably agreed with her, ‘cause a lot of people would say well, Lefty sounds like he’s singing from his nose. And I’d say I don’t (care) if it’s comin’ out his ass, it sounds good to me.

“When I was a kid, and there was Eddy Arnold and Bing Crosby, Tennessee Ernie Ford and all those great singers, my mother listened to all that. Well, she bought an album of Hank Williams. An album in those days was like four 78s. With eight songs. It included ‘They’ll Never Take Your Love From Me,’ ”I Can’t Help It,’ ‘Lovesick Blues,’ ‘Never Again Will You Knock At My Door’ and a couple of other ones. And I actually learned to play the guitar, I think, open chords, with Hank Williams and Bob Wills music. I had 78 records of Bob Wills, 78 records of Hank Williams, and I learned all those songs.”

“It seemed like every time I liked a song, I noticed that the same guy’s name was written real small down underneath the big name. And I put it together, and I said you know, I think he sings this song better because he wrote it. It didn’t take a genius to figure out that a man could play a part in a film a lot better if he was playing his own part. Than he would quit trying to learn and project and interpret the story from somebody else’s mind. I realized that, real young on, and I thought boy, there’s two or three things I need to do. And one of them’s write a song.”

“It’s very, very claustrophobic. It’s like being smothered with a pillow. And I have recurring dreams, it’s been 40 years and I have recurring dreams sometimes as many as four or five times a month still yet. And I’m always there, and I’m always disappointed that I’m back in there, and that I’ve somehow fucked up again. There I am and I can’t get out.

“I think maybe it’s the involvement in this demanding, successful career that I have. I think psychologically I’m imprisoned. I have no choice, really. It would be impossible for me to retire from this business. And so it is, in fact, a prison in some way.”

“It came from the shoulder; a lot of times, you contrive and you write. And that’s an art that you develop. But ‘Okie From Muskogee’ came too quick; it was like a picture appearing on a paper. And the artist standing there and saying hey, where did that come from? It came in a matter of seven or eight minutes, I wrote the thing down. And then read it back, and got up and sang it to a melody that’s still there. There was no work, no honing of any sort.

“See, I was coming from the point of view, once again, of my father. I was coming from their point of view, all of my family, the ones who had the religious orientation. The Arkansas/Oklahoma attitude that I’d grown up with, not necessarily agreeing with. But I thought boy, I don’t necessarily agree with every word in this song, but this son of a bitch is a motherfucker!

“Over the years, I’ve had people tell me five or six different messages out of the song I didn’t even know was there. One night Willie Nelson said to me, ‘Are you tired of singing Okie From Muskogee?’ I said, why? And he said ‘Well, if you are, I’ll take the son of a bitch for the next 30 years.’”

“If you’re a songwriter or if you’re a pole vaulter, and you do something right, by accident, only a fool would vary far away from that which is working. In other words, we’d had ‘Workin’ Man Blues,’ ‘Hungry Eyes,’ ‘Mama Tried’ and a few pretty nice songs that were autobiographical, but all of a sudden we had this ‘Okie From Muskogee’ which was controversial. Well, then all my years of songwriting went to work, don’t you see. Because hey, first of all, I’m a songwriter. I said ‘Hey ...I have a following now. A political following.’ OK.

“The song was written in a way that didn’t describe me. It made me mysterious. And the curiosity built up, and it’s been there ever since.

"Of course, the next song was 'The Fightin' Side of Me.' There's one that was written off the cuff, but the moment I wrote it I knew it was the next followup"

“I’m glad they don’t play me among that shit. And I’m sorry whose feelings get hurt. I don’t want to be associated with that stuff that I’m hearing. I’m not built like those guys are, and I can’t make videos like they do, because they won’t be as sexy! But I’ll tell you what, I’ll match ’em on the stage anywhere in America. I don’t care if they play me on the radio or not.

“If it never happened again, if they turned the lights out this minute, it’s been the greatest trip in the world.”