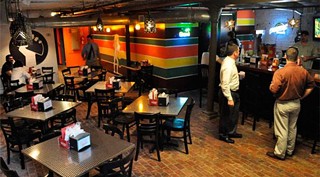 Even with the door to Taco Abajo swung wide open to the broiling Broughton Street sidewalk, a few steps down, into the dimly lit but welcoming restaurant, I was enveloped in cool air conditioning.

It’s a familiar scene to regulars who called T–Rex Mex their favorite hangout. Taco Abajo (Abajo means under, or beneath) partners made minimal changes to the decor. Only the menu has seen a facelift.

Early adopters at Taco Abajo complained that portions were too small for the price tag — we’re all pretty spoiled by head–sized burritos at those chain joints.

But the flavors and tortilla fillings concocted by Chef Chris Cohen are far beyond the corporate seasonings of the chains.

Diners can choose from a variety of fillings or toppings for a burrito, taco or salad. There are plenty of vegetarian options and a trio of fish options.

A side dish — Mexican rice, refried beans, black beans or a house salad — with a drink may be added to any dish for just $2.

Of course, this eatery is all about getting down with a cold beer or tequila–based cocktail. Again, us early adopters suffered with a soft drink menu, but late last week the liquor license arrived.

Again, don’t expect a burro–sized burrito stuffed with rice and beans — this is more akin to Mexican street food — without having to dodge the traffic.

Late hours have made Taco Abajo a popular destination for food and beverage industry staff looking for a late night (or early morning) meal.

The franchise World of Beer is under construction next door to The Gap near the corner of Barnard and Broughton streets. There are nearly 20 WOBs around the Southeast.

The Savannah location has a Facebook page posted and that’s the best bet to keep track of an opening date. If your beer–dar has been beeping, that could be because WOB typically features more than 500 beers — including dozens on tap.

Chef Thomas Keller earned the title “best chef in America” with his Yountville, CA–based French Laundry restaurant. Now, the chef and his team — who also founded famed Bouchon Bakery — are earning more gold stars for themselves with a new gluten–free flour.