“So What’s the Hurry?” Book Launch

Listening to Jane Fishman talk about trains is motivation enough to get on one.

Her eyes light up when she talks about the experience of taking a train.

“It’s leisurely, it’s always a surprise,” she raves. “You never know who you’re going to run into. It’s person-to-person; it’s analog. Anything can happen.”

In Fishman’s fifth book, “So What’s the Hurry? Tales from the Train” the writer shares her favorite stories inspired by train travel. 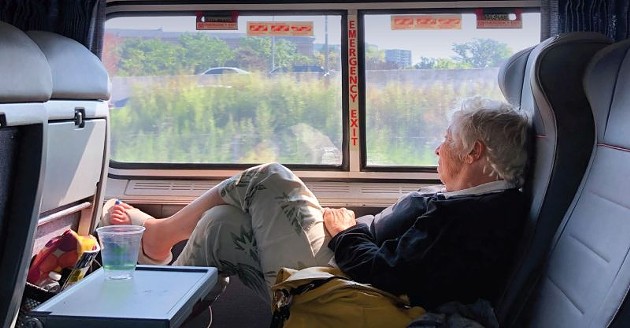 Jane Fishman on the train.

She started riding the train while she was writing three columns a week for the Savannah Morning News as a way to find some inspiration. She still writes her column, but now just once a week.

“There are so many good stories on the train,” she recalls. “Trains, I felt like, were a really good way to get stories. So, when I stopped writing three times a week, I continued to take the train.”

She has no shortage of train stories, including the time she missed her ride.

“I was taking a train up to Durham to see a friend that involved a couple different transfers, and you think, ‘Oh, trains are always late,’” she shared warily. “I get up there and the damn train has already left; I’m watching it pull off.”

Turns out, the route originated in Savannah, which, as Fishman now knows, means it leaves exactly on time.

“I stood there watching it. You’ve watched all these movies, you think, ‘I should run!’” she says. “You can’t catch it. There’s no way you can jump on.”

One of Fishman’s favorite train rides is the one from Savannah to Washington, D.C. It’s a twelve-hour ride and, depending on when you leave, might go through the night.

“It’s such a wonderful experience. The train just starts off, I thought of it as shyly,” she says. “It goes through the night, which is kind of interesting. It gets dark, you go to bed, wake up, the train has not stopped going. Planes don’t really go through the night unless they’re overseas.”

Planes are, by far, today’s preferred method of travel. Planes are chic and trendy, and the jetsetter lifestyle is now more alluring than hopping on the train. But Fishman loves the slow pace of trains, their lack of urgency.

“You’re going 79 miles an hour. You’re going through America,” she says, “through ballparks, through small towns. You just see humanity. I think you see so much more than when you’re above the clouds. You can sleep, read, walk around. And sometimes you even get there at the same time. When you consider going to the airport, finding a parking spot, getting on the plane; the planes can be delayed for ridiculous reasons.”

“Trains are a way of life in Europe, and when they come to this country, they know the value of trains,” she muses. “If you want to see America, you don’t see it from the clouds, unless you just want to go from big city to big city.”

While Fishman is inspired by what she sees on trains, she notes that she doesn’t actually write while she’s riding.

“That’s not how my process is,” she says. “I was just on the train, observing it, feeling it, taking it in, taking notes. Amtrak had this thing you could apply for, to be a writer on the train, and it didn’t make any sense to me because I don’t write on the train. I’d rather just look around and see and think about somebody and listen to a conversation and talk to someone.”

On Wednesday, Dec. 4, Fishman will launch her book at the Book Lady Bookstore. Expect her to share some stories from the book—and to immediately want to hop an Amtrak.

The end of the world with Jane