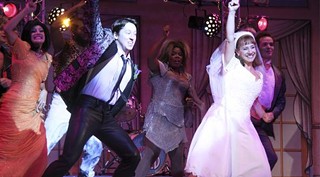 Jam Theatricals
Mike and Jill Zygo get groovy in "The Wedding Singer."

Mike and Jill, Robbie and Julia. Mike and Julia, Jill and Robbie. They're the same people.

The national touring production of The Wedding Singer, which visits the Johnny Mercer Theatre Jan. 26, is all about a four-cornered love triangle.

Husband-and-wife musical theater team Michael and Jillian Zygo have the lead roles, Robbie Hart and Julia Sullivan, who meet cute and flirt, lose each other and flirt, then realize they can't live without each other. And flirt some more.

The Zygos met (cute) as college freshmen in Geneseo, N.Y., in 1997 ("that's our smooch-iversary," Jill says) and have appeared in dozens of shows at regional and national theaters around the country, both together and individually.

They were married five years ago.

The Wedding Singer is, of course, an adaptation of the 1998 rom-com starring Adam Sandler and Drew Barrymore. It takes place in 1985, as lovelorn Robbie, a jobless rock ‘n' roller who's reduced to singing at weddings to pay the bills, meets sweet and innocent Julia, who's engaged to a jerky Wall Street broker.

It's been turned into a feel-good musical, and was nominated for five Tony Awards when it premiered on Broadway in 2006.

Mike and Jill have been starring in the touring production since September.

What are the perks of working so closely together, night after night?

Jill: Automatically, it's just comfortable. The chemistry's already there. So already trust each other onstage, so we didn't have to go through what actors usually do: "Hi, nice to meet you. I have to fall in love with you." We had that chemistry. And we respect and trust each other's talent, so right from square one it's all there.

It's funny, following the scene where we first meet, we have a scene where we dance together. And the director said "Hold on, guys. You just met, remember?" We had to kind of work backwards and recall what it's like when you enter someone's personal space for the first time.

Mike: It's fantastic, because we're really lucky to have jobs in this business right now at all, and we get to not only tour together but play opposite each other in the lead roles of a show. We really couldn't ask for much more than that.

Is there a down side? What if you had a little tiff in the afternoon - how do you face each other and be all lovey-dovey at night?

Mike: We find time for ourselves. We each go off and do our own thing on occasion. Whenever we don't have a show the next day, I'll go out and possibly have a night out with the guys. Have a drink or two.

Jill: I have lunch dates with the girls.

You've been part of The Wedding Singer, telling this same story, for quite a few months. How do you keep it fresh every night?

Jill: That's actually the hardest part of our job, remembering that this audience has never seen it before. To us, it might seem like "Oh, we've done this a million times." Well, they've never seen it. So reminding yourself constantly to keep it real, that's the hardest part. Trying to re-discover everything onstage for the first time.

Mike: I just remember the magic of going to see shows for the first time, especially if you don't know anything about it, and just living through that. You remind yourself of that every single time the show starts, that you have to give every single person everything that you've ever given.

Everyone's seen the movie ... how does the stage show compare?

Mike: It's all the same characters, and it's basically the same storyline. So you're going to recognize a lot of the same things happening. The end has a little bit of a twist that's more adapted to the stage. It doesn't end on the airplane; it ends in Vegas.

What about the music - the same assortment of ‘80s pop songs?

Mike: It has an original score written by a team of Tony Award-nominated guys. They've taken the songs from the movie and written original songs that are "in the style of." Like instead of "Love Stinks," when Robbie freaks out at the wedding, they have a song called "Casualty of Love," which is in a similar style.

The two songs that Adam Sandler wrote for the movie are in the stage version, "Somebody Kill Me" and "Grow Old With You."

What's next for you two?

Jill: We close March 28 in New Haven, Conn., and we actually have about six weeks off. We were blessed one more time - you never know when it's going to happen - we've booked some summer work together. We'll be doing Showboat and Smokey Joe's Café in Illinois, and then Pump Boys and Dinettes in Idaho.

Mike, you've made two country music albums. Do you live in Nashville?

Mike: No, we're both from New York and we don't have a permanent residence at this point. And we plan on going back there after this is over. We live in various hotels throughout the nation.

You don't always work together. Doesn't it get tough sometimes?

Jill: It's absolutely tough. When we're not working together, people always say to me, "Oh my God - don't you miss your husband?" I say of course I do, but he's not in Iraq - he's singing and dancing somewhere in the country. He's a musician, and it's in his heart. And you have to keep yourselves happy in order to keep your relationship happy. I truly believe you can make anything work if your heart is in it.

What do you say, Mike?