MIND AND METHODS OF AN ARTIST: Carter Flachbarth at SCAD’s deFINE ART

Carter Flachbarth, a 2020 SCAD graduate, is exhibiting “Morality Sucks” at the 2022 deFINE ART at the SCAD Museum of Art.

This is his first museum exhibition, which assembles Flachbarth’s recent paintings that cast an ambiguous male figure in numerous narratives, reflecting on anxieties and tensions founded in topical global events.

“My exhibition is less about the actual events at play and more so the anxiety and tension caused by the way information is distributed, consumed, and altered. There are people who are a lot smarter than I who could probably draft you a critical argument of the mal factors of the information age, but my work functions as personal anecdotes of my experience within it,” said Flachbarth.

Flachbarth’s work is reinforced by prosaic themes exemplified in the obscure actions of the artist’s protagonist. Originally cast as an autobiographical stand-in, this figure has come to represent broader archetypes of masculinity and their fundamental flaws, and is portrayed variously as agitated, melancholic, bored, and distracted. 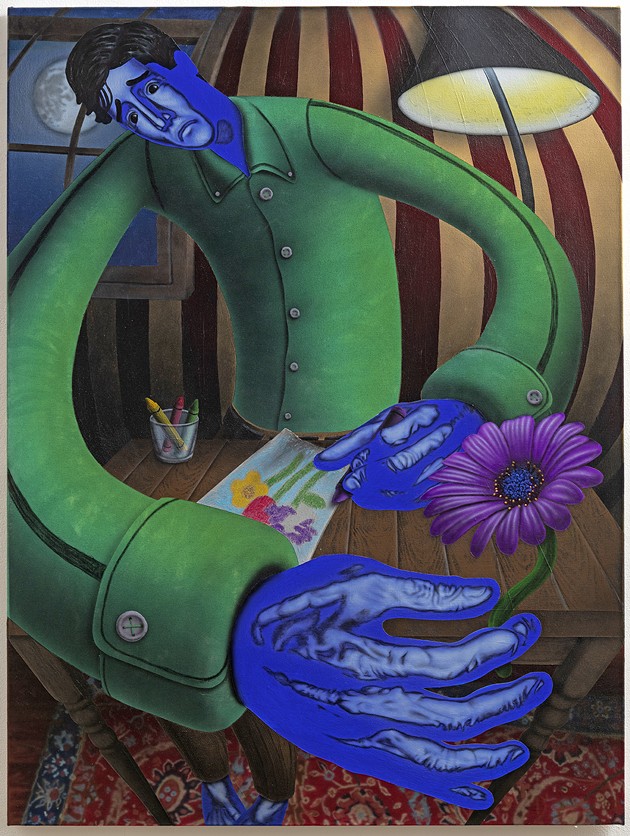 Carter Flachbarth, “DRAW,” 2021, acrylic on canvas, 48 x 36 in. Courtesy of the artist and Richard Heller Gallery.

“The figure in my work, to me, has always represented a place holder or a mannequin. I always wanted to paint figuratively, but I never cared to paint as if it were in the second person. I don’t want to elicit any feeling of relationship with the figure, or the figure having eyes that “looked back at you,” said Flachbarth.

Flachbarth spotlights action through the magnification of scale, rendering exaggerated bodies cinematically, as if through a fisheye lens, bending and twisting the picture plane in irregular positions.

“The way the perspective of the canvas is harshened and warped, some of the nonsensical nature within the narratives and settings, and the overall ambiguity of the work are all efforts to alter, warp, and disguise some of the visual information at hand,” said Flachbarth.

He says his primary goal for his work has been about the narrative rather than the figure in the narrative. The artist wants the figure to be approached more analytically by scanning the scene to garner information about the figure and their motives for being there.

Flachbarth says his experience at SCAD has helped him in his craft, and the relationships he formed with his professors was critical to his growth as an artist and after graduating his professors became like peers as they continued to give him great insight.

“My professors pushed me to be a better holistic artist. Besides the professors, having access to a studio as a BFA candidate was a huge leg up, and that personal workspace was a huge part of my growth as it allowed me to put in the massive hours that creative careers can necessitate,” said Flachbarth.

“It’s been a wild experience to have a museum show at a premiere contemporary art museum like the SCAD Museum of Art, just a couple of years after I graduated.  I am excited to be able to speak about the exhibition and inspire current students.  This opportunity also helps me build my confidence as an artist,” said Flachbarth.

His exhibit Morality Sucks will be on display until March 27 at the SCAD Museum of Art.