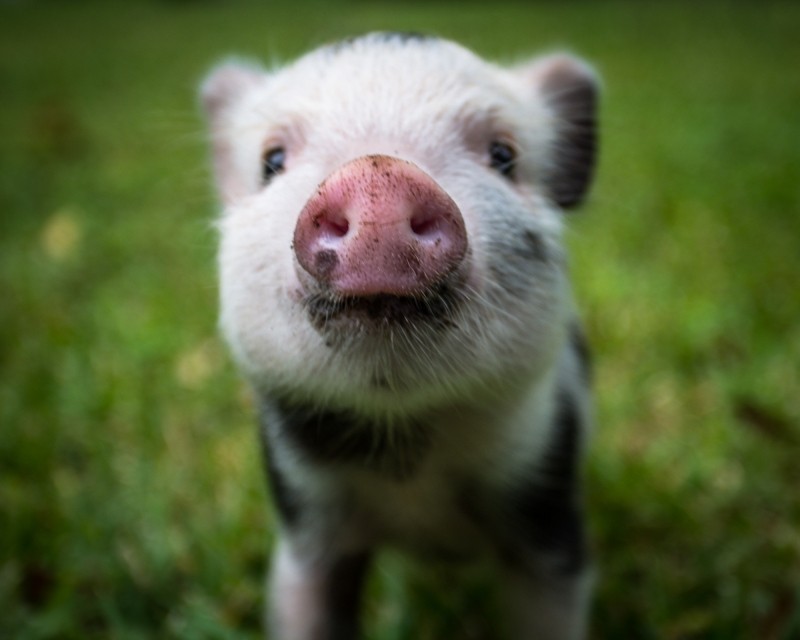 ONCE upon a time, about six weeks ago, a little spotted pig was born on a lovely farm on the outskirts of town.

She was the runt of the litter, and had a lame back leg that prevented her from keeping up with her brothers and sisters.

But her teeny stature and pronounced limp didn’t stop this plucky porker. She gained strength, and after a few more weeks, she’s become the porcine heroine of a real life fairy tale: “Maggie the Pig” has found her true calling as a therapy animal for dementia patients.

“For a while, I had been researching pets that our residents could love and hold and cuddle,” says Myra Braswell, the activities director at Magnolia Manor, a senior assisted living center on St. Simons Island.

“But a lot of them have respiratory issues and fragile skin, so traditional cats and dogs weren’t really good options.”

When Braswell found out that miniature pigs not only have soft hoofs but are hypoallergenic, easy to housetrain and the fourth-smartest animals on earth, she knew she’d found the perfect companion for her charges. She contacted Julia Davis of Savannah Miniature Pigs, who donated the tiniest of her current swine-y bunch to Braswell and Magnolia Manor. 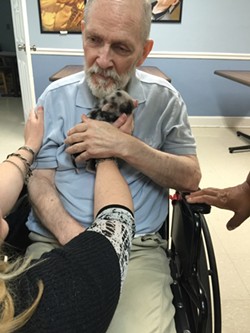 “I think it’s a win-win; Maggie needed a little more attention and physical therapy to keep that tendon stretched out on her back leg, and the residents get a lot of extra love,” says Davis, who raises the pet piglets on a southside farm along with horses, heritage turkeys and small herd of alpacas.

Maggie and her littermates are of the Juliana variety, a breed known for its sociability, colorful spots, waggy tails and stalwart body, unlike its pot-bellied counterparts. Adult Juliana pigs usually weigh in at 30-40 lbs. and top out at the size of your average Cocker Spaniel—as long as they stick to the prescribed diet.

“You do need to lock the pantry,” warns Davis. “They will eat anything—the cat food, the dog food, your food, all of it. They’re pigs!”

Davis estimates she’s adopted out 300 Julianas since she began breeding them in 2010. Most are already spoken for before they leave the farm.

After they’re weaned, Davis brings the little piggies to her Isle of Hope home, shared by a friendly Pharoah hound named Ra, a Chihuahua called Bruiser and Samantha, a blue and gold Macaw.

“Pigs get along with pretty much everyone,” she assures as Ra and a piglet named Caroline frolic in the backyard, the latter emitting squeals of delight.

Davis, also a mother of six, enlists her 21 year-old daughter, Devin Hanton, and farm assistant Jordan Fielding to help keep the piglets corralled and prepare them for their new homes. By the time the piggies leave their care, they will be leash-trained and housebroken as well as vaccinated, spayed/neutered, microchipped and certified by Chatham Animal Hospital. A leash and harness are also included in the price, which averages $850 but can vary for invidual piglets.

Davis heralds miniature pigs as easier to raise than puppies and says they make exceptionally intelligent companions once they’re grown. On her website, she quotes Winston Churchill: “A cat looks down upon a man, and a dog looks up to a man, but a pig will look a man in the eye and see his equal.”

“Basically, that means they think they’re entitled to sleep in the bed,” she laughs. (Pigs in blankets. Can you handle the cuteness?)

Meanwhile, back at the Magnolia Manor senior home, Maggie has achieved full mobility and seems to be in, well, hog heaven.

“I’ve had animals my entire life, but this is by far the best pet I’ve ever had,” declares Braswell over Maggie’s contented grunts.

The certified dementia practitioner also reports that the therapy pig has been well-received by the residents, particularly a gentleman named William Schroder.

“This morning, Maggie got up and snuggled up under in his beard, and he smiled and laughed for the first time in ages. And you know what he said? ‘It’s better than it’s ever been.’ ”

That kind of meaningful engagement can be hard to come by, and Maggie the Pig appears born for the job.

“She just seems to have a calming effect,” continues Braswell, her voice breaking with the joy of seeing the once-debilitated runt put an agitated patient at ease.

“Makes you realize how a small cuddle can make a big impact.” cs