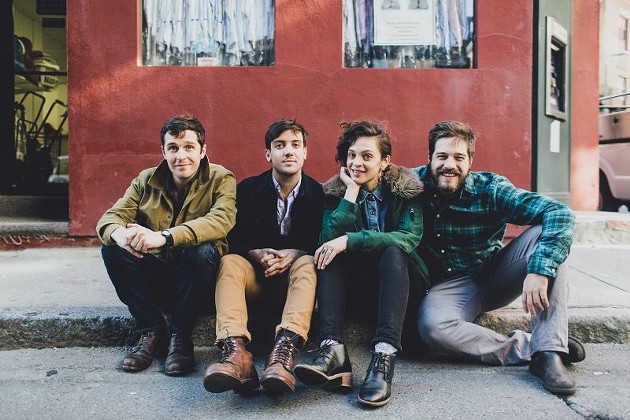 IN SPRING 2016, the string band Mipso found themselves looking at a musical embarrassment of riches. The group was ready to begin recording then and there, only to discover that the person they wanted to produce their next album, Todd Sickafoose, wouldn’t be available until January 2017.

But instead of biding their time, Mipso decided they had another option.

“We realized we had more than an album’s worth of material already,” violinist/singer Libby Rodenbough explains.

“This was in, I guess, mid 2016. So we decided we would just make an album in the Triangle (Mipso’s North Carolina home base, anchored by Raleigh/Durham, Chapel Hill and Greensboro/Winston-Salem) with some of the people we knew well there and trust it. Then we would keep the January session on the books.”

Looking back Rodenbough, as well as guitarist/singer Joseph Terrell, agree that doing two albums in such a short span of time may not have been the best idea.

“There were definitely some times during that period where we felt like we had bitten off more than we could chew,” Terrell says.

“Looking back, it’s interesting to hold these two things true in my head. One, is that I’m really proud of both of these records. I think they both feel like us. On the other hand, I wouldn’t recommend this process of making records to anybody because it was stressful as hell.”

The album recorded in summer 2016, Coming Down The Mountain, was released in spring 2017, while the Sickafoose-produced Edges Run is just now being released this April.

Terrell says it was strange to make Edges Run without having any sense of how audiences would respond to Coming Down The Mountain or how fans viewed those songs in comparison to the material from Mipso’s three earlier albums, Long, Long Gone (2012), Dark Holler Pop (2013) and Old Time Reverie (2015).

But the lack of fan feedback also helped make the band feel free to explore different ideas in recording the songs for Edges Run. That was part of the idea behind working with a new producer in Sickafoose, who is well known as musical director and collaborator with Ani DiFranco.

Some of the songs Mipso brought to the sessions weren’t finished, and band members Terrell, Rodenbough, Jacob Sharp (mandolin, vocals) and Wood Robinson (bass, vocals) weren’t sure how to move forward with these tunes. The group hoped Sickafoose would be part of the solution for these unfinished tunes.

“For Edges Run,we had songs that we didn’t know exactly what to do with. We wanted Todd, the producer, help us make sense of them a little bit,” Rodenbough says. “There was a lot of taking songs apart and re-arranging them and messing with the structures of the songs or the feel and there was a little more of an experimental approach to production.”

The music on both Coming Down The Mountain and Edges Run continues to expand the breadth of Mipso’s sound. Long, Long Gone and Dark Holler Pop hued fairly closely to the group’s bluegrass roots, but the band showed signs of having other influences to explore on Old Time Reverie.

With Coming Down The Mountain, several songs pushed well beyond bluegrass (such as the eerie organ-laced ballad “Water Runs Red,” the Laurel Canyon-ish country pop of “Monterey County” and the tender and spare ballad “Cry Like Somebody”), but there was still plenty of bluegrass woven into the material.

With Edges Run, though, Mipso has reached a place where the music can’t really be assigned to any genre—bluegrass or otherwise. There’s country, string band and even a bit of ambient pop in songs like the ballads “Didn’t Know Love” and “Take Your Records Home.”

The sturdy “Moonlight” and the peppy “Servant To It” parcel out pop/rock, country and bluegrass in pretty equal amounts.

Then there is “Oceans,” a gentle tune with a lovely winsome vocal that is as pop as anything Mipso has recorded, and “Sleep, Little Dreamer” which indeed has a lullaby quality within its rustic country/bluegrass sound.

There’s also a darker tone to the music on Edges Run than on the more upbeat Coming Down The Mountain. This makes sense considering the latter album was recorded in summer in North Carolina and Mipso enjoyed the camaraderie created by having musician friends around to contribute to the tracks.

Rodenbough feels the backdrop for the recording of Edges Run may have helped bring out the darker edge in Mipso’s music. Not only was the group dealing with the strain of embarking on a second album, they had seen some relationships end and some deaths of friends and family members.

And the session happened in the middle of winter when the weather outside of Sickafoose’s Oregon studio was rather depressing.

“But I think it was a dark-feeling time for all of us and it was tough because you couldn’t go outside much. You’re always couped up in the studio during recording anyway, and it can feel a little bit claustrophobic. But it was just more so (this time) because it was nasty outside most of the time. And we were all staying in a little tiny air B&B together, and there was just not a lot of personal space. And we were all, I think, to some extent wondering if we were doing the right thing and if we should be making an album so soon.”

The group’s mood is anything but dark now. Before beginning an early 2018 tour, the group had a couple of months off, which helped recharge the batteries after what had been a long stretch of writing, recording and tour.

The group is also enjoying the challenges they have encountered in figuring out how to translate some songs from Edges Run in particular to the live stage.

“We actually have had a drummer on the road with us for a little over a year now,” Rodenbough says. “We had drums on the previous album (Coming Down The Mountain), although they were a lot more straight-forward than the drums on this one. So percussion will be probably a little more central to the sound of some of these songs.

“And the other element that we’re trying to incorporate are some of the keyboard sounds, the organ and piano sounds,” she says.

“They’re all simple parts and we’re all capable enough players on a keyboard that we can probably all cover the parts, but it’s a matter of figuring out where we need the other instruments we play and where somebody can hop on a keyboard for a little while. We’ve been figuring that out, but that’s, I like that kind of challenge because I think that the best live shows are when the performers are a little bit unsure of themselves, just enough that you have that sense it’s possible that things could fall off the rails,” she says.

“So I think it’s better if you can find ways to naturally confuse yourself a little bit for the live show. That’s a good thing.”