Cafe offers more than a stunning view of the cathedral

FOR WELL over a century, community members and visitors, by the hundreds of thousands, have flocked to Savannah’s Cathedral of St. John the Baptist, basking in its opulent history.

This charmingly restored cafe on Abercorn Street offers a lot more than just a stunning view. With its European inspired ambience and imported Parisian décor, the Mirabelle Cafe prides itself in being “Savannah’s only destination for authentic Belgian Liege Waffles.”

Owners Brett and Kim Turner, from the Whitaker Investment Group, entrusted the Mirabelle Café to charismatic and enthusiastic manager, Martin Powell. Powell has been dedicated to the Café since its opening in May 2015. 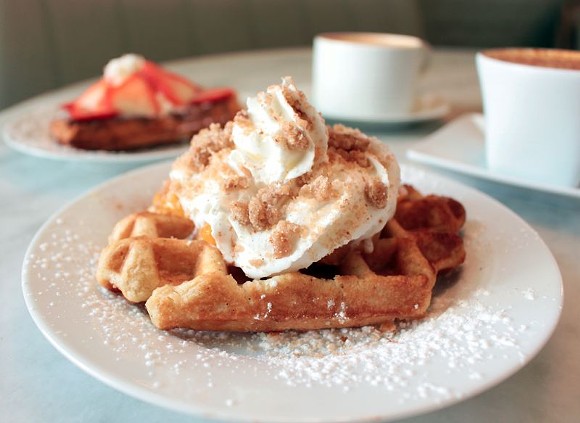 “There is a lot of charm in this little space,” Powell honorably professes, referencing the modest square footage of the dual-roomed café, bordered by exposed brick walls, studded in teal accents and garnished with marble surfaces.

In like manner, the small-scale kitchenette in this French inspired hub does not repress Powell’s inventiveness, but only inspires concoctions, ranging from gluten-free chocolate cake with chocolate ganache to house made lemon curd creme.

Of these creations, the dish upon which the entire café menu is based is of course, the Liege waffle.

In an art inspired town, the Liege waffle serves as a canvas fostering creativity, with both savory and sweet options. Pearl sugar, literally the size of a pearl, is integrated into the handmade, yeast-based dough and set aside to rise for several hours.

Once seared on a sizzling waffle iron, the pearls of sugar caramelize, encrusting the crispy exterior with bits of candied morsels, leaving the inside of the waffle fluffy, with pockets of sweet sugar.

“No maple syrup is needed,” Powell boasts. With its sweet sophistication, Mirabelle’s signature “assemble to order” waffle can be savored plain with powered sugar, topped with fresh fruit or sandwiched with decadent meats and cheeses.

On a lazy Sunday afternoon, I had the opportunity to indulge in Mirabelle’s pièce de résistance, the infamous Liege waffle. For an average of $6.50 apiece, one can choose from a variety of specialty waffles and signature toppings, each as toothsome as the next. I was first introduced to the “House Special.”

This cornerstone waffle was served with Nutella, a hazelnut cocoa spread that drips with decadence, supple strawberries and house-made whipped cream. The waffle had pockets of sugary crystals; while the subtle whipped cream and fresh strawberries balanced the richness of the Nutella. 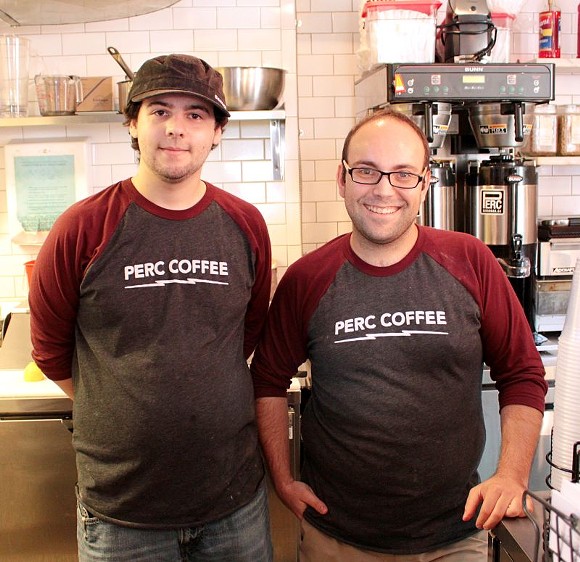 The equally noteworthy “Georgia Peach Waffle” was as divine as it sounds, paying homage to our official state fruit. Juicy peaches were bathed in brown sugar syrup, and then garnished with a billowing cloud of homemade whipped cream and crumbly cinnamon streusel. Experience will tell you that the sweet waffle options are bound to delight your taste buds.

However, for those risk-takers who choose to defy the customary waffle ensemble, there was the savory “Croque Monsieur”. As a sandwich that is traditionally made with lightly sugared grilled bread, the Liege waffle kicks it up a notch.

A single bite into the waffle’s crisp shell, released electrifying tings of sweetness from the pearl sugar, zaps of saltiness from the ham, all softened by comfort inducing gooey cheese. After a delightful encounter, the Liege waffle has proven itself to be as unique as the Mirabelle Café.

In addition to the waffle experience, the Café offers, of course, a variety of coffee drinks. Mirabelle proudly serves coffee supplied locally by PERC Coffee Roasters. As I blissfully sampled my waffles, I was presented with the Rose Mocha and the Cinnamon Bun Latte to sip.

The Rose Mocha had an irresistible hint of rose, which complimented the embrace of warm dark chocolate. The Cinnamon Bun Latte flavor lives up to its name and does not disappoint. 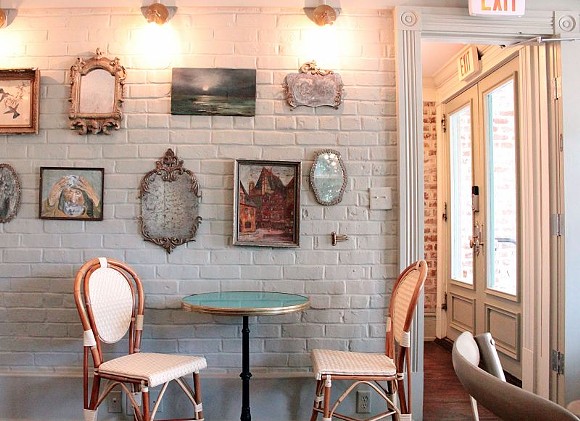 In addition to PERC Coffee, Powell seeks to locally source any other goods that cannot be made in house, including, bread from Le Café Gourmet and quiches from the Beaufort Bread Company.

While the Liege Waffle is already one of a kind in the Savannah food scene, Powell has indicated that he and brother Zach, sous chef from Jazz’d, have plans to expand Mirabelle’s waffle repertoire.

The two brothers have hinted that the waffle will be enhanced and utilized in even more extraordinary ways in the weeks and months to come.

For just over one year, tourists, neighbors and the young women of St. Vincent’s Academy have frequented this posh Parisian café. In this small span of time, this neighborhood nook has become a place of leisure and repose, capturing the hearts and taste buds of all who pass by.

From Liege waffles to PERC Coffee, the fare and beverages served at the Mirabelle Cafe have an indulgent European character, transporting its patrons to a chic café on the streets of Paris.

For more of Maria's food writing, go to A Common Connoisseur. 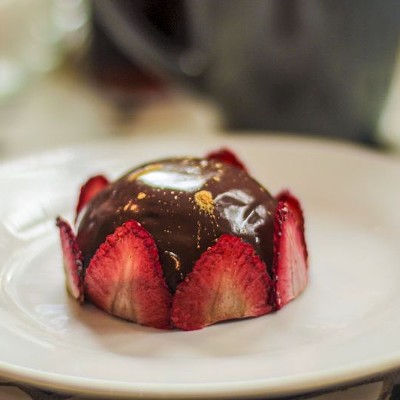