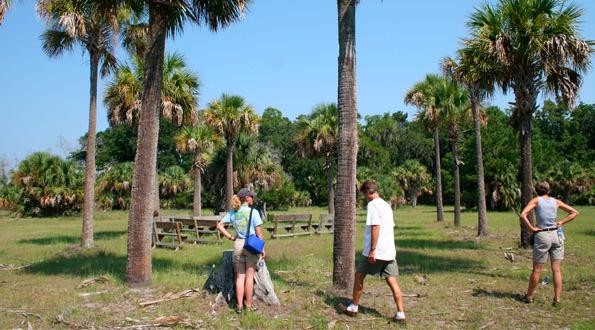 Archaeology’s not all Indiana Jones — until it is.

Case in point is the groundbreaking work done on St. Catherine’s Island south of Savannah. David Hurst Thomas of the American Museum of Natural History in New York spearheaded a project in the late 1970s which uncovered an enormous slice of previously unknown history.

He and his team found and researched the fabled Spanish mission of Santa Catalina de Guale. That Franciscan mission on St. Catherine’s, begun in the 1590s and intended to Christianize local Native Americans, was not only in operation much longer than the better–known California missions, it’s a lot older too.

Thomas and his crew even found the site of the old chapel. The wood–and–thatch structure is gone, but the foundation remains, its former walls indicated by an outline of palm trees.

Mass is still occasionally held there, making it technically the oldest active Christian church in North America.
A talk by Thomas himself is the highlight of “Digging Savannah,” a new program made possible by a grant received by Armstrong Atlantic State University.

“The grant was to get students more involved in solving the huge problem of archaeological site loss, especially along the coast where we have so much development,” explains Laura Seifert, an AASU social sciences adjunct professor helping to lead the project, along with fellow prof Barbara Bruno.

The Feb. 12 talk by Thomas is followed by a March lecture on Georgia’s underwater archaeology and an April talk on the Civil War site Camp Lawton. Now on the grounds of Magnolia State Park near Millen, Camp Lawton was actually bigger than the much more well–known Andersonville POW camp.

Seifert says that contrary to popular opinion, there are very few protections for archaeological treasures.

“The only protection is on public land, and that’s only sometimes. If federal money or permits are involved, then there are some archaeological protections, but otherwise nothing. And certainly nothing on local level,” Seifert says.

“We do such a good job in Savannah with preserving our buildings, but people tend to forget about the archaeological sites which are attached to pretty much every one of those buildings.”

She says even in a case like the “Big Dig” — the Ellis Square redesign and construction of an underground parking garage which must have uncovered plenty of artifacts — there was no opportunity for research.

“You get that chance with a private company only in a really rare case. Construction companies and developers have to complete their projects in a timely manner and run their businesses.”

Two other components are involved with “Digging Savannah”: An archaeological walking tour app and some visits by the “ArchaeoBus.”

“The app will take you through different sites to tell about the different archaeology that’s gone on there,” Seifert says. “It will be map–based, and probably will start at Battlefield Park — so much interesting archaeology has been done there.”

The app — scheduled for rollout by the end of this semester and so far only for Android — will also feature the slave quarters and basement of the Owens–Thomas House. Seifert says there are also plenty of sites in downtown public spaces, such as Madison and Lafayette squares.

The “ArchaeoBus” — a repurposed bookmobile used for school visits to spread awareness of archaeology — will hit the Armstrong campus in the spring in visits open to the public.

All lectures begin at 6 p.m. in Armstrong’s Ogeechee Theatre, 11935 Abercorn St., and are free and open to the public.