How a couple's trip to Mexico enlivened Savannah's dining scene 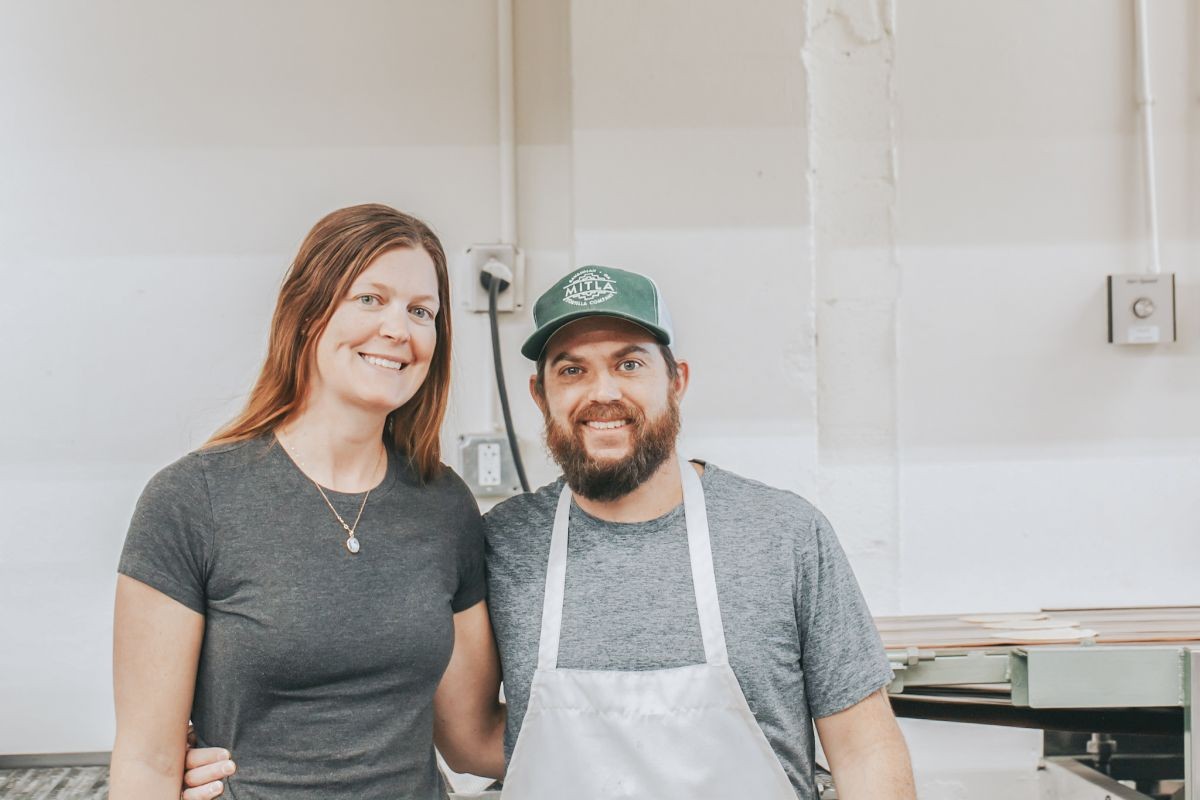 Owners Grace and Cliff Newland on a break from production. 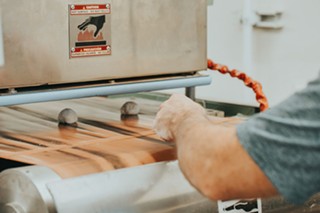 Cliff Newland as he flours every ball of dough and places each on the line.

IT IS NO secret that most Americans prefer flour tortillas over corn. But anyone who has traveled to Mexico has likely tasted corn tortillas as they were intended, and can attest to the major difference in these traditionally made tortillas versus the packaged taco-shell versions widely available in the States.

After a trip to Mexico, Mitla Tortilla Company owners Grace and Cliff Newland immediately fell in love with the authentic corn counterpart. As the story goes, it was the very first corn tortilla that Grace ever ate and liked.

Being located in the Southeast, it was difficult for the couple to recreate or find the experience they had in Mexico; as the next best thing, they started making their own tortillas. With Grace’s background in public relations and Cliff’s culinary career, the natural progression was to start selling their authentic tortillas where they were located at the time: Charleston, South Carolina.

Grace tells their tale. “We founded Mitla Tortilla Company in 2015. We started out just as a farmers market business, and we had so much demand from restaurants that we decided to take it to the next level. We found a shop in Charleston and began wholesaling, mostly to restaurants but also to mom-and-pop stores.” Mitla’s following grew quickly and eventually expanded into Savannah through the Forsyth Farmers Market.

As Mitla’s new home base, the transition to Savannah was a natural progression because the duo wanted to expand their production facility for more space. Fast forward to 2020 − Mitla is a growing small business in Savannah that plans on expanding to more of the Southeast. “Immediately the community embraced us, and we kind of built a name for ourselves at the Farmers Market here,” Grace said.

Maybe you have never tried authentic traditional corn tortillas during a trip to Mexico, but I bet you have tasted Mitla’s authentic version at any number of restaurants around Savannah. My first Mitla was at none other than Bull Street Taco, which is one of the reasons why I noticed their tacos are so delicious. Other Savannah restaurants that feature Mitla include Hop Atomica, Sentient Bean, Ordinary Pub, The Common, and Fat Radish. If you find a blue corn tortilla at any of those restaurants, they are Mitla’s as well.

If you want to recreate an authentic recipe yourself using some painstakingly made tortillas, you can buy the Newlands’ tortillas at Brighter Day, Vertu Farms, Local Farmbag, and the Forsyth Farmers Market.

The most ingenious part about the Mitla shells is that they are partially cooked. Reheating them is simple, and by only cooking them halfway it preserves the deliciousness of the product and keeps it from drying out. A simple toss into a dry, hot pan, and the tortillas puff up just like they would if they were made fresh the same day. Storing them in the freezer is an option if you do not plan on eating them quickly.

In the beginning, every single tortilla was handmade in very small batches. To make their signature corn tortillas, first fresh corn has to be broken down. According to Grace, “Our corn tortillas are made the traditional way they have been made for thousands of years. We start with organic yellow and white whole-kernel corn.”

The corn is cooked in lime to break down its hard exterior shell. After a quick wash to remove any lime and outer shell, the corn is ground down into masa. The masa is what creates the tortilla dough through kneading, shaping, and pressing.

“What you end up with is a tortilla with a lot stronger corn flavor, and it is more pliable,” says Grace. Each tortilla is lightly cooked, then sealed into its packaging. The result is a traditional gluten-free tortilla.

Their flour tortillas are made from only five ingredients. Limited ingredients does not mean limited flavor. By using high-quality ingredients in a bona fide way, the product’s flavor is always superior. The end process for making the flour shells is the same, and now all manufacturing has been streamlined, a tiny bit more, through their production facility. It means more tortillas for the masses.

“We have two separate production facilities for each type, because we do not want to cross-contaminate wheat, and a lot of our corn-tortilla customers are gluten free. We are actually planning on going after gluten-free certification,” explained Grace. There are no preservatives in any of the tortillas, which really doesn’t matter because they tend to be eaten rather quickly. All of Mitla’s products are vegan and certified organic.

Prior to 2020’s drastic halt in business growth, Savannah was becoming quite the foodie destination. With another James Beard Award and new restaurants opening constantly, we were putting ourselves on the map. Luckily for Savannah, two gutsy pioneers decided to push through the muck of this year, and pave the way to show the entire region how to do tortillas the right way.

Grace says it best: “A lot of times people overlook the tortilla, and think of it kinda as kind of like a side note, when really it should be a main ingredient. I think we are changing the perception of what a tortilla can be, and also opening the door to people even considering eating a corn tortilla.”