The Georgia lineman is still on the line

A look at what it takes to be an electrical lineworker

Is it storm-related work?

But the nearness of these workers – and those storms, Matthew and Irma – got me thinking about what it takes to become one of these high-climbing helmeted heroes.

So, I went to the closest place where you can get a quick leg up on an electrical lineworker career, Okefenokee Technical College in Waycross.

But I did talk with a former lineworker of 42 years who now teaches lineworker students.

Instructor Danny Thornton led about eight students into to a field where the lineworkers-in-training donned white hats, spiky shoes, thick belts and harnesses – for high climbing.

“If you like a challenge, you’ll like this profession,” he says. “You never know it all when it pertains to electricity. I was still learning when I retired.”

Conquering any fear of heights is only the beginning of the challenge.

And, of course, they work around lines carrying enough power to kill people.

“I’ve had good friends to get electrocuted,” Thornton says. “Somebody was parked under a power line eating a sandwich and the power line falls, hits the car and kills them.”

Thornton describes the death as a freak accident.

But the U.S. Bureau of Labor Statistics says that 26 electrical lineworkers, or about 20 per 100,000, died in 2015, making it one of the most dangerous professions in America.

If you can handle the risk, it offers rewards.

When I ask him if Matthew and Irma spurred new interest in the profession, he says no.

“These young ones coming out of high school, I think it’s because their buddy’s making some...” he says, his voice trailing off into the obvious.

A Georgia Power spokesman says lineworker apprentices make about $40,000 per year plus benefits and overtime. “Senior journeymen,” the top in the profession, make about twice that much.

Future lineworkers start off as “groundmen,” however, stocking and cleaning. “You got to learn everything on the ground before you can start going up,” Thornton says.

Okefenokee Technical College is one of only four public technical colleges in Georgia that offer a lineworker certificate, very helpful for a job. It’s an eight and a half week program.

A private school in North Georgia, the Southeast Lineman Training Center, has hundreds of students, a 15-week program and is one of the largest such schools in America. 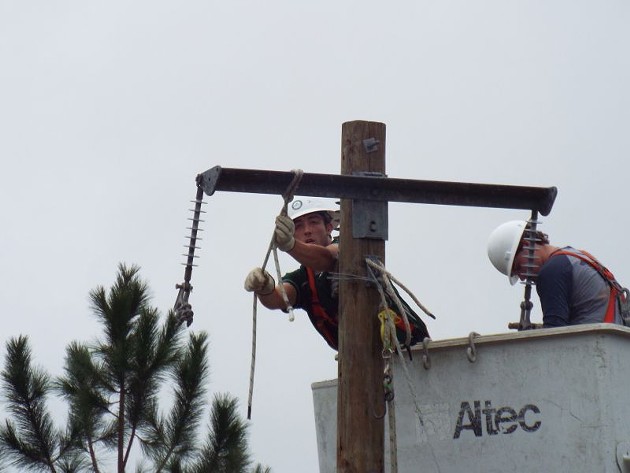 Savannah Technical College offers a five-to-six term degree that provides advanced training, including what lineworker students need for an entry-level job and beyond.

Obviously, I’m not a career counselor and anyone interested in the profession should consult one about the options.

But as long as our lives are tied to electrical wires (and I’d prefer to cut that cord, too) it’s not like lineworkers are in danger of “displacement” any time soon.

Which leads me to a question: Since the power company’s doing all this work any way (on the Southside and elsewhere) why can’t they just bury the lines to prevent future outages (and the work it requires)?

A Georgia Power spokesman says that other underground utilities like gas and cable, not to mention trees and driveways, make it cost-prohibitive, if not impossible, to retrofit existing neighborhoods.

So, I’m grateful for the occasional road blockages and the workers who create them.

Thornton says that’s the most rewarding part of the job.

“The people are very appreciative,” he says. “They’d just about give you the shirt off their backs.”