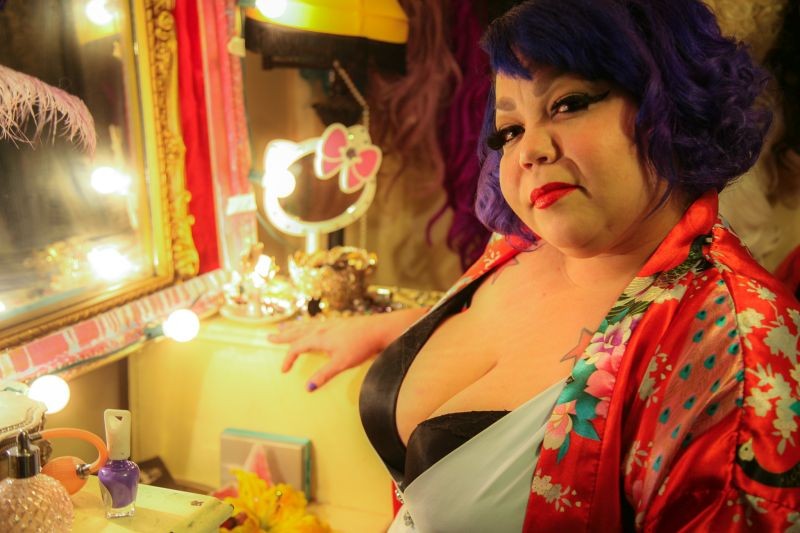 The outfits! Those eyelashes! That rack!

Of course Savannah has the hots for the sassy co-founder of The Savannah Sweet Tease Burlesque Revue, who struts her stuff onstage as Rita D’LaVane, leaving a trail of errant sequins and dropped jaws in her wake.

It may seem like she shimmied out of the womb swinging those tassels, but Anita hasn’t always played the role of voluptuous vixen.

“It’s definitely been an evolution. There was a time in high school when I identified as male,” recalls the ’00 Savannah Arts Academy grad. “But then a friend gave me a makeover, and I just embraced being girly as shit.”

She took her reclaimed femininity into hyperspace after her older sister dragged her to a drag show at Club One, where she witnessed the gowns and wigs as the epitome of glamor.

She began performing as a go-go dancer in bars in college, then progressed into the world of burlesque, combining performance art with positive sexuality. Inspired by the World Famous *BOB*, who defied gender conventions to become one of most renowned drag queens on the New York scene, Anita manifested the outsized glamazon persona of her wildest fantasies.

“It’s all drag, really. Drag isn’t about gender necessarily,” reflects the violet-haired femme as she sits at the vintage vanity in her Eastside boudoir, where closets overflow with chiffon and satin and there’s an entire cabinet of handmade pasties.

“It’s about the transformation. There’s power in putting on costume and two hours’ worth of make-up and becoming a different character.”

(She’d always been obsessed with those Tiki Room birds, but has never seen them in person. “My parents are taking me to Disneyworld this summer, I can’t wait!”)

La Narcisse also cites Beyonce as an important influence (her two kitties are named Queen Bey and Sasha Fierce) on her work ethic and body-positive messaging.

“I think part of burlesque is letting go of the idea that you have to meet some social standard. The more I perform, the more I embrace that.”

Those crushing on Anita will have to understand that she’s deeply in love with her partner, Chris Underwood, who she refers to lovingly as “The Wizard,” but that doesn’t mean meaningful flirtation is out of the question.

“I get aroused by other people’s creativity to be themselves,” she coos, batting her eyelashes like an exotic bird’s wings.

When she’s not performing with her Sweet Tease sisters and logging hours at her day job, Anita will be touring various burlesque festivals this summer and promoting her glittery bath product side hustle, Burly Bombs.

But even if you run into her at the Kroger, you can expect her to be in full vamp mode, because life’s too short not to wear the sexy shoes.

“Sometimes I feel like I don’t know how to dress myself in real life.”