WHILE it feels like our world is shutting down, the ocean never stops. Neither does the Skidaway Institute of Oceanography, the research and training institution that’s part of the University of Georgia family.

The institute has been a Skidaway Island regular for half a century, formally joining UGA in 2013.

Clark Alexander is the director of the Skidaway Institute of Oceanography, where he’s been for 31 years—first as a postdoctoral scientist, then as a faculty member, and now as director.

We spoke with him about the exciting goings-on last week.

Clark Alexander is the director of the Skidaway Institute of Oceanography.

How has the pandemic affected your operations?

As part of the University of Georgia, we’re following the guidance of main campus. All of our nonessential research has been shut down here on campus. Our faculty are not conducting research other than essential time-sensitive research that has been approved.

Most of the labs are idle at this time. We do have minimal staffing on site to make sue we can respond to emergencies. Our ship crew is here rotating in and out, doing operations on the vessel because there’s always maintenance to be done.

Tell us a little more about Skidaway Institute of Oceanography’s mission.

We have scientists that examine all the different aspects of the ocean, its chemistry, the physics of the water and the currents, the biology and ecosystems that live there, and geology as well. We cover the basic sciences in oceanography. Our dominant strengths are in the chemistry and the biology of the ocean, although we have some very good faculty and some interesting projects in the physical realm as well. 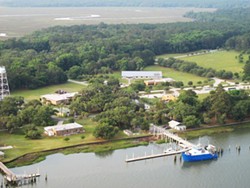 Aerial view of the Skidaway campus.

We have a couple new hires here. One is Adam Greer, and he has a very state of the art high-tech imaging camera that you tow behind a ship as you move around on the surface of the water. That’s the way you get an idea of who is living in the water in terms of the plankton.

We had to be nimble and flexible to adapt, but we got the whole process done and we were able to get our top two candidates hired.

Let’s talk about some of the special projects you have going on right now. One, I understand, is about fish migration.

The sound in the sea and the fish migration, that’s all a project of Catherine Edwards, who is a physical oceanographer here. Her mainstay science tool is a glider that glides through the water. It can stay out for weeks at a time. It measures the temperature and salinity of the water, both of which are important physical characteristics.

The glider at work.

It also has a listening device that listens for tags that have been placed in fish. When it hears one of those tags, it listens for the number and reports back what the number was, and that’s linked directly to a specific fish. There are groups all up and down the east coast that are doing some tagging efforts. Catherine’s work is done out at Grays Reef National Marine Sanctuary. They have a number of tagged fish out at Gray’s Reef, and they’ve been trying to fly the glider around and locate those fish.

Another special project is about your microplastics research.

It’s a specialized microscope that has lasers built into it so you can hit particles of anything you can collect. It’s been used to identify different kinds of plastics, and it’s being applied now to find out whether it’s polystyrene or polypropylene. If you’re finding pieces of plastic that are by definition small, you can’t tell what it was just by looking at it, so this tool allows you to identify what kind of plastic it is, and that will help you deduce where it might’ve come from. The big question, of course, is what are the health risks associated with it. That’s a very preliminary research area.

That’s the Mosaic expedition, and that’s an international project that was basically recreating a scientific expedition that had been successfully carried out in the late 1800s. A guy took a wooden-hulled vessel and a crew of scientists, and they froze themselves into the Arctic ice up near Greenland. Over the wintertime, the sea ice goes from the Greenland/Iceland side of the Arctic Ocean out to the Bering Sea side, and the ice moves that way. If you can’t get to the North Pole to do studies there, you can freeze yourself into the ice and let the ice take you there.

The Germans have an icebreaker called the Polarstern and they decided they’d use it as a floating platform for a whole Arctic winter. One of our faculty members, Cliff Buck, had one of his postdoctoral scientists go on that cruise. They were supposed to swap off halfway, but when the coronavirus hit, they didn’t want to chance anyone on the ship getting it. This scientist, Chris Marsay, has been stuck on the Polarstern for an extra couple of months.

The problem now is that Chris is on an H-1B visa, and President Trump has issued a presidential declaration that no H-1B visa holders can enter the US from Europe, so he can’t come home. He’ll have to quarantine in Germany for 14 days, and then his home country is the UK so he’s going to go there until the travel ban is lifted. I think he’s disappointed he can’t come back to the lab and start working on his samples.

How can people get involved with Skidaway Institute of Oceanography?

Right now, they can’t do anything [laughs]. There are two UGA institutions out here on Skidaway. One is us, whose focus is marine research and graduate education, and then the other unit is the marine extension service which runs the aquarium. They’re really set up to receive the public. If people are interested in research, we’re always happy to show people around and talk to them about the work that’s going on here.

We also have a speaker series called Evening @ Skidaway, where we have our faculty talk about something cool they’re working on. That’s on hold as well, but that’s well-received.

We want to take what we know and take it back out to the public. We want to provide as good advice as possible to people that have to make decisions about resource management. We take our job as state employees seriously, and we want to give back to the citizens of Georgia. We’re trying to spread our expertise as widely as it’s applicable.

We’re poised for a great next 50 years. We’ve had a very successful 50 years, and we’re ready for another 50 going forward. I’m really excited to see what is next. 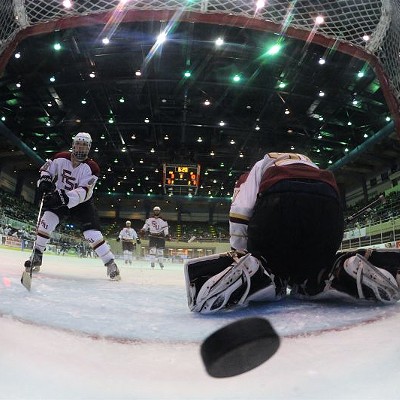