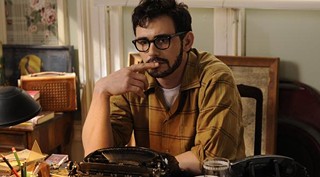 The Psychotronic Film Society’s indie film series “Movies Savannah Missed,” which screens new, limited run films that never appeared at any area Cineplex, continues this week and through the winter with a interesting selection of lesser–known–but–critically–celebrated flicks.

This week’s selection, The Girl Who Played With Fire, which screens at Muse Arts Warehouse on Sunday, is the follow–up to the Swedish thriller The Girl With the Dragon Tattoo, from the series of internationally best–selling books by Stieg Larssons that were adapted for the big screen in 2009.

In the series’ second installment, protagonists Mikael Blomkvist and Lisbeth Salander, a middle–aged investigative journalist and a young, punk rock hacker respectively, are investigating a sex–trafficking ring when Salander must go on the run after being accused of murder.  Blomkvist must work to clear her name without losing sight of their original investigation.

The Girl Who Played With Fire maintains the dark brutality that made the first book and movie a success. While some familiarity with the first installment definitely helps understand the characters, it’s not absolutely necessary to enjoy the movie, because the plot of each is self–contained – same characters, new adventure.

With some chagrin and confusion amongst the international film community, the films, although barely a year old, are set for Hollywood remakes next year, directed by David Fincher (Fight Club, The Social Network) and starring Daniel Craig of James Bond fame as Blomkvist. The main reason for the remake is the obstacles of subtitles and the lack of a recognizable name on the marquee for American audiences.

The originals are definitely worth seeing first as a point of comparison for what’s to come. They do an excellent job of maintaining the suspense that made the books such a success.

The following week, the “Movies Savannah Missed” series continues with the dramatic bio–pic Howl, which follows legendary beat poet Allen Ginsberg during the the time leading up to the release of the poem and the obscenity trial in the mid–1950s that followed its publication.

The film’s lead, James Franco (Spiderman 2, 127 Hours), has received heaps of critical praise for his performance as Ginsberg since the movie was released earlier this year. The rest of the cast includes some other heavy hitters as well, like David Strathaim (Good Night and Good Luck), Jon Hamm (TV’s Mad Men) and Bob Balaban (Altered States, Best in Show).

For fans of the Beat poet era or James Franco, this is a must–see.

These two widely divergent films (in style and subject matter) will be the last two of the year, before a little holiday break, however, the series continues in January with some other interesting selections that are sure to strike a chord with folks who thirst for something a little different than what’s being served by Hollywood’s big studios.

The Girl Who Played With Fire