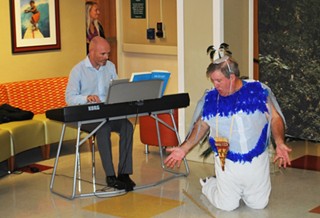 Peter Shannon is sitting behind a small piano in the lobby of Memorial University Medical Center Children's Hospital. In a sing-songy voice, he addresses a small group of young patients and their families: Forget your troubles and your aches, it's Prince Tamino being chased by a snake!

From behind a painted forest mural springs the prince in question — it's Jamie Keena dressed in royal-looking duds — and Heidi Bindhammer in a big, black papier-mâché snake costume.

These are Savannah-based singers and actors, bringing a little light into young lives with a 20-minute adaptation of the Mozart opera The Magic Flute.

At the piano, Shannon — the artistic director and conductor of the Savannah Philharmonic Orchestra and Chorus — plays Mozart's beautiful, dainty melodies and narrates the story, which comes to incorporate the adventures of a "bird-catcher" named Papageno (Billy Wooten), a princess (Michelle Evans Jarell), three ladies with magical powers, a funny bird and a couple of not-too-scary monsters. They all sing beautifully as they move around.

"I do really believe in the power of something like this," Shannon explains after the mini-opera ends, and the kids in their hospital gowns have all said a shy hello to the performers. "Singing Christmas carols is nice, but to see a snake come out and chase a prince, that's hard to beat. And it's Mozart! I think if you're going to be serious about doing it right, you've just got to go the whole hog."

Shannon came up with this once-a-month idea, as part of the Philharmonic's outreach program.

"I basically come from a whole line of doctors," he explains. "My dad's a doctor, my sister's a doctor, my brother's a psychotherapist and an end-of-life therapist. I suppose I've always been interested in holistic medicine and holistic health.

"I talked to the people at Memorial about bringing music into the chemotherapy rooms. It's been empirically proven that if you listen to live music when you're receiving treatment, it's a very good thing. And the whole idea of de-sterilizing this hospital environment was really important to me."

Bringing music to pediatric patients was a logical step for Shannon, who has two young children himself.

"I wanted to do something more interactive for kids," he says. "And I was really wracking my brains. And the truth is that I had The Magic Flute on my music stand upstairs in my study, and as soon as I saw it I said 'That's it!' An opera, you wouldn't associate it with children, but this is such a wonderful story. All opera is basically storytelling.

"I spent the whole summer working on it, and making sure that I could pare it down to a kids' amenable version. The most difficultly was trying to make sure there was a line through the story, that we weren't just shredding the whole opera."

The music is all Mozart; the lyrics are (mostly) adapted from the original libretto. Shannon wrote the narration himself.

"I've done a lot of research on interpretive pediatric medicine," the conductor explains, "and one of the things we learned a lot about was the use of storytelling in helping people to heal. Basically, the idea is to use an artistic tool to get them to open up.

"Music is obviously an artistic tool. But here, we went further and used imagery. For example, the three ladies — as they're called in the story — who have magic powers and kill the snake in the opera. They're wearing scrubs. And instead of carrying spears, they have IV poles. The "goodies" are the nurses; the "baddie" is the snake, which represents illness. And the snake costume has an open face, so that you can see that it's a person. So little kids won't be scared."

With funding from The One Hundred, Shannon and a revolving band of singers and actors plan to bring The Magic Flute to the Children's Hospital once a month.

His goal, he says, is nothing more than to make these kids smile a little, enjoy the music and the story. Forget their aches.