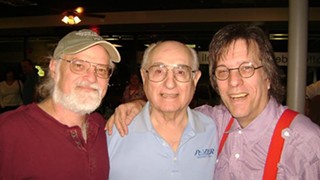 50 Years Ago Today: A Beatles Celebration

Tickets: $15 at savannahrocks.org, and the Sentient Bean

In 1949, Navy veteran Bill Avila left Rhode Island for the sunnier climes of Savannah. "I promised myself I was gonna be a Southerner, he says. "I was gonna drive to work."

Avila and his wife Irene recently celebrated their 70th wedding anniversary. He's 89 now, and retired from his executive job in the construction industry, but Bill Avila's legacy in Savannah rock 'n' roll was cast in cement long before he sat behind that first desk.

The year was 1963. Avila was choir director and co-president of the PTA at the brand-new George Mercer Junior High in Pooler. To raise funds, he put on a variety show. Teenaged singer, guitar and sax player Larry Knight and his band, the Trebles, were on the bill.

After the show, Knight asked Avila if he would be interested in managing the Trebles. "I said I don't know anything about managing rock groups," Avila recalls. Still, he was intrigued and offered to do what he could.

At the time, rock bands could play at country clubs—the social centers of the local universe—and at teen dances, usually held on Friday nights after junior high or high school football games. The odd birthday party.

Nobody knew how to "get" a group to play for their event. And that's how Bill Avila became not only a personal manager, but a booking agent.

"I became part of the Trebles," he says. "I didn't play anything. I was managing. We split evenly. I just had that one band.

"Then they got popular. People would come to me and say 'I want the Trebles,' and I'd say 'They're already booked.' They'd say 'Got anybody else?' It grew, so I grew with it."

Avila's hands-on management style, via a company he called Talent Unlimited, turned out to be an invaluable asset to the bands springing up all over town.

There was Echo ("Savannah's only Beatles Band!," who looked and dressed the part), and the Rogues. The Younger Brothers. The Chevelles. Luvin Kind.

For him, the Trebles were first and foremost. He went to every gig, and if he was otherwise occupied, Irene would go. "I dressed 'em," Avila explains. "Our first outfit was brocaded jackets. I was out in the crowd wearing one, and so if anybody wanted to know about the band booking, they would say 'See the guy in the brocaded jacket?' The worst part of this thing was dressing.

"Then along come the Beatles and they were dressed nice, nice hair. I remember taking Larry to Effingham County, to a school gym to play a dance, and the kids were seated up in the bleachers. The sound in a gymnasium's not too good.

"We had a following that went with us everywhere. And one of them went out and bought some Beatle wigs and put 'em on the boys. They were behind the curtain, and I got up and I said 'I'm the Beatle Daddy, and I brought them to play for y'all.' Curtains opened up, and the kids rushed down to the stage just like it was the real Beatles. I had to get out of the way or get knocked down."

The Beatles' arrival in early '64 changed everything—the clothes, the hair, the stage show.

"I remember they were the first band to have their picture on an album cover," says Savannah musician Roy Swindelle. "Album covers had pictures of girls on them. They had their picture on it. All kinds of little things like that. Who knows, there might not have been a music business if not for the things they did and the doors they knocked down."

Swindelle was a drummer who preferred the "harder stuff" from groups like the Animals and the Yardbirds. It wasn't until the Beatles' psychedelic period, the Sgt. Pepper era, that he started to appreciate the Fab Four.

"My first bands were what I call Ventures bands," he says. "We did surf music, instrumentals. The Ventures were huge in my world at the time. That's another thing the Beatles opened up, bands that sang. Before that you had singers. My sister liked Fabian, Frankie Avalon, the Kingston Trio and stuff like that."

It was around this time that Swindelle hooked up with Bill Avila, whose "organization" had become Associated Talent Agency. There were other booking agents in town, too, and good ones, but Avila was everybody's Beatle Daddy.

Avila was dealing, for the most part, with teenage musicians. "Run it like a business" was his motto.

And you couldn't get work if you played original music. "My thought was 'Give the people what they want,'" he says. "So when bands came to me and wanted me to book them, I always wanted to hear them first."

But the times they were a-changing, as harder rock came into vogue, and as the players became old enough to play in beer joints.

Swindelle, whose family had briefly relocated to Charleston, pounded the skins in a Savannah power trio called Kind Dog. They played Cream and Hendrix. He was also a part of the city's first "prog rock" outfit, Topaz, whose keyboard player had the first synthesizer in Savannah.

Eventually, he joined an Avila-managed band called Maiden Voyage (then just Voyage), whose guitarist was a young kid named Frank Andrews. "I think Frank wanted to change Voyage and make it more rock 'n' roll," Swindelle says, adding with a chuckle: "I just wanted to make money and play all the time."

Avila: "I wanted to start a girl band, so I got three girls. One of 'em was married; she got pregnant and had to leave. I wanted three girls and Frank Andrews—he was 14 at the time. We had one girl that could do 'Bobby McGee' just like Janis Joplin. But after she sang that, she couldn't sing anything else—her voice was gone. We practiced at (agent) Butch Schroeder's house; he was my competition. He thought I was gonna book through him! Anyway, we started adding more musicians."

By the time Roy Swindelle left Voyage, there were no more girls in the band. Eventually, Voyage morphed into the Veraflames.

"Everybody played with everybody else," he says. "Today, I get people who come up and say 'You used to be in my brother's band!' And I go, 'Maybe.'"

Playing the bars, Swindelle adds, had its perks. "In the early '70s, the best gig in town was the Black Lace Lounge down at Tybee. It was a little hoochie-coo bar, and it was the best-paying gig around. They had a lighted dance floor. You started at something like 9 and got out at 4 in the morning.

"You'd play an hour and then the girls would come up and dance. And the problem with the girls was that they all kinda looked like your mama. It wasn't like you would hang around during the breaks."

After a knee injury forced him to give up drumming, Swindelle switched to bass, then guitar. His early '80s band was called Harbor Express. After years of touring the southeast, Swindelle says, he got tired of taking new band photos following yet another change in musicians.

He and his wife, piano player Martha Peltier Swindelle, left to form a duo, first called Rise and Shine, then Pet Supplies (because Martha's grandmother owned a pet shop on Waters Avenue). The next name was Time Bandits.

He works solo now, sometimes with a bank of drum machines and effects (as Roy & the Circuitbreakers). He and Martha comprise two-thirds of the Christy Alan Band.

By the '80s, the need for booking agents—and personal managers —was on the wane. Bands booked themselves, the stage shows changing appropriately as the styles of music morphed.

"And every small town had local bands," Swindelle explains, "and everybody had their favorite bands. So they started calling the bands direct. 'Why do we need to go to Savannah? We like Bubba's band.' It's like everything, the whole dynamic began to change."

At the Feb. 7 event at American Legion Post 135, bands from several generations will perform, including the Rogues and the Veraflames (from the good old days), GAM from the 1990s, and current favorites Cusses and Voodoo Soup. Each group will play a set of favorites (original music too!) and at least one or two Beatle songs, in honor of this momentous anniversary.

A highlight of the evening most certainly will be an ad hoc group assembled by the Savannah Rocks! brain trust, with musicians from each generation playing together for the first time.

It's called the Bill Avila All-Stars.