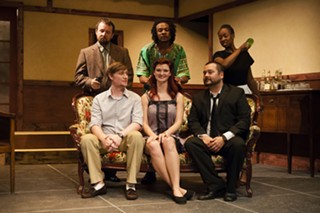 AASU
You want to know who done it - of course you do!

And Then There Were None

Also known as Ten Little Indians, Dame Agatha Christie's And Then There Were None is the archetypical murder mystery: Ten disparate people accept a dinner invitation to a large, mysterious house on a remote island, and over the course of the evening, they die off, one by one. Accusations fly.

Who’s behind these dastardly, albeit ingenious, crimes? That’s for the audience to decipher in the Armstrong Atlantic State University Masquers production of And Then There Were None, on the Jenkins Hall stage June 26-29.

“As you’re watching, you’re trying to figure out who did it,” says director Peter Mellen. “And all the clues are there. That’s one of the things that we’re being very scrupulous about. We know that when it comes to people who like murder mysteries, you can’t cheat. If something happens, you’ve got to do it in front of them.”

And Then There Were None is the best-selling mystery novel of all time (Christie wrote the book and the play). Christie also wrote The Mousetrap, which became the longest-running play in the history of London’s West End.

Mellen believes it’s the plays’ interactive nature that makes them so bloody appealing.

“Most of the fun of going to an Agatha Christie murder mystery is trying to figure out who did it,” he explains. “Particularly in this one, because the killer actually kills people in front of you! And you don’t know he’s doing it. I think that’s the great joy of the thing.”

A few years ago, Mellen directed The Mousetrap for the Masquers. “During intermission,” he remembers, “I heard the same two things constantly: ‘You know, I saw this 20 years ago, but I can’t remember who did it.’ And then he’d get into an argument with somebody else who saw it 20 years ago, only this guy is sure it’s this person, and the other one says ‘No, it’s that person,’ and there’s perfectly good reasons why your favorite suspect is your suspect.

“And as the play progresses, you realize, ‘OK, that guy didn’t do it, because he’s dead.’”

His young cast is having a ball with Christie’s vintage 1939 plot (that’s when the novel was published; the stage adaptation premiered in ’43). “They are just having fun coming up with these characters,” says Mellen. “Of course, they’ve read the entire play. They know who it is, and they know how it was done. But of course their characters don’t, at any particular moment in time.

“So that’s one of the things that we’re working on—that’s their challenge. They all want to be the best suspect possible. That’s the other thing—everybody who’s stuck on this island has got a dirty little secret.”

Every actor—victims, suspects, killer (hey, don’t look to us to let the secret out) —is always thinking about the audience. “You have to follow the rules of a murder mystery,” Mellen offers. “If you do that, and you treat the material with respect, they will have a delightful time and be very enthusiastic.”

CS
Who done it, in Armstrong's And Then There Were None? Wouldn't you like to know? Photo by AASU