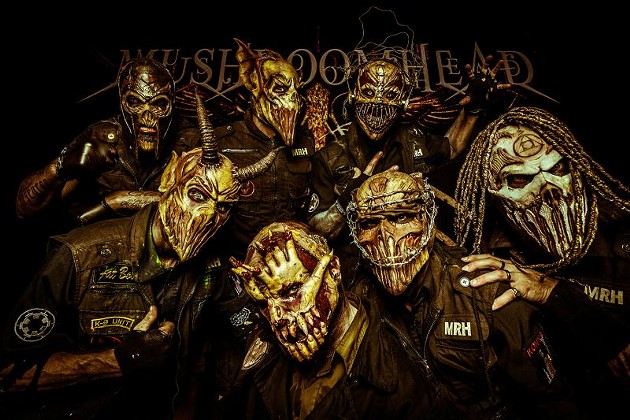 Cleveland’s Mushroomhead rose to fame in the '90s with wild, horror-style get-ups and a style of alternative metal that blended hip-hop, industrial, and techno into its sound.

When the band formed in 1993, the members were busy playing in several local bands. To set the new side project apart, the members opted to wear masks. After great audience response to their costumes, the image stuck.

The band released its first album in 1995 on its own label, following with 1996’s Superbuick and M3 in 1999. It’s around that time that the famed feud with fellow shock-rockers Slipknot began. Mushroomhead teamed up with Eclipse Records for a compilation album, XX, in 2001; that release’s success led to a deal with Universal, tours on Ozzfest. 2003’s XIII, which debuted at No. 40 on the Billboard Top 200 charts, featured the single “Sun Doesn’t Rise,” which was highlighted on MTV’s Headbangers Ball.

In 2005, the band moved to Megaforce Records, released Savior Sorrow in 2006, and shared the single “Simple Survival” with the world. Beautiful Stories for Ugly Children followed in 2010.

Mushroomhead has gone through several lineup changes—vocalist Jeffrey “Nothing” Hatrix and drummer Steve “Skinny” Felton have been with the band since the beginning and will lead the band at their Stage on Bay appearance with frequent tourmates Unsaid Fate.