Based on a Sky 3D series, Galapagos 3D is written and narrated by the legendary Sir David Attenborough

Galapagos 3D screens Friday at 7 p.m. at the Trustees Theater along with The Last Reef

THE '3D Night’ featured at last year’s Gray’s Reef Film Festival was so well received, the Festival has brought in four incredible 3D films for this year’s edition, expanding to two 3D nights.

Based on a Sky 3D series, Galapagos 3D is written and narrated by the legendary Sir David Attenborough, veteran of decades of BBC nature shows and an early force in environmentalism. 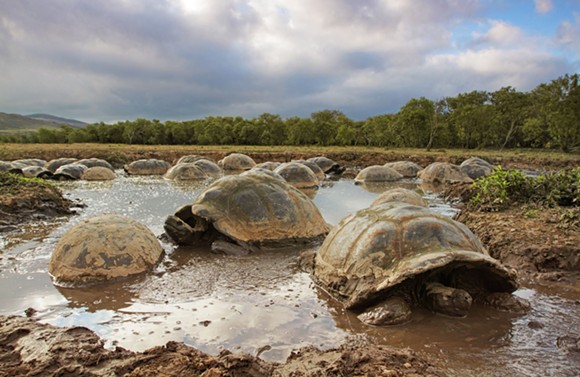 The film is directed by Martin Williams, a longtime collaborator with Sir David, who turned 90 years old last year. We spoke with Williams a few days ago.

Working with an iconic figure like David Attenborough as much as you have must be almost surreal.

Well, if you’re British you grow up knowing who he is! There, watching his programs is almost a cliché.

Our first project together was First Life. It was a passionate project for David. It was a great opportunity for me, of course , and his reputation preceded him. I eventually got past that and we’ve been able to work together very well (laughs.)

One time we were shooting in Newfoundland. We found an absolutely priceless location, on a beautiful, rocky beach.

Occasionally we’re able to get David to some more difficult locations, which he likes to do when he’s able.

I was walking with him back to that beach we’d found, talking. And then I realized I forgot where the location was! We had been walking for 15-20 minutes and I had lost track of where we were.

Of course I saw my career splashing before my eyes! We eventually got there, but the light was failing, and our opportunity was almost gone.

David insisted that we go for it. We got him out on the rocks with the equipment as quickly as we could. After just a few minutes, he was prepared and delivered a perfect take. He was at his classic best. Absolute perfection. We were all amazed. And he did it with this amazing rock structure in the background at the perfect time. It was magical.

Attenborough famously calls the Galapagos Islands ‘nature’s greatest experiment.’ What does he mean?

Everything unique comes together in this one place. You have geological and climactic elements which have combined to produce a particularly rich variety of wildlife, plant life, and marine life.

Each island developed the potential to evolve in isolation. Then of course they’re volcanic islands as well. New islands are literally being built. Because of the nature of how the islands are formed, each has individual characteristics, ranging from quite harsh to more lush.

Of course, the ocean is pretty much dead in that area of the tropics. But there’s a current from the Arctic conveyor that enables marine life to thrive in the waters around the Galapagos.

It is a strange experiment. Evolution works in odd ways there.

There’s a poignant irony in these beautiful images of one of the last unspoiled places.

Any detective story makes for great film. And sometimes because of the sheer degree and scale of the problem, there is a tendency to frame these things in terms of the ‘last pristine spot.’

But at a point you do you acknowledge there is a joy in natural history. The world is beautiful — embrace that.

I admire those documentary filmmakers who bravely take these issues head-on. That sort of hard-nosed approach, the more direct approach, can change behavior.

That approach has a huge role to play in changing our reliance on the internal combustion engine, for example, in putting the spotlight on renewable energy, in reducing demands on the planet.

It’s not sustainable what we’re doing. But other species aren’t able to change their behavior. We are.

The world of 3D technology is changing so rapidly. What are the challenges of the technology in the marine environment?

The 3D cameras themselves are a big change. Not only do you have to use wide angle, the camera itself represents a big bit of kit. Luckily the animals in and around the Galapagos don’t have a natural fear of humans. So they often come up to the camera to investigate.

The heavy camera system works best just set up on the ocean floor. Ironically, since the camera is too heavy for one person to carry, in a way we return to the shooting style of old-fashioned drama.

A lot of the process is putting yourself in the right place at the right time. And much of that comes with experience. I work with Michael Pitts, who is simply the top underwater cameraman.

What project are you working on as we speak?

I’m working in a Chinese national park on the border of North Korea. It’s a fly-ride experience. We shoot the park over all seasons of the year, all shot from the air.

With the proliferation of drones, there are concerns about them flying where they shouldn’t. But as a filmmaking tool, they’re really coming into their own.

I’ve had a pretty privileged time of it. I’ve been very lucky to be able to work in the places I have.