This is obvious: it’s a hard time for businesses right now.

The uncertainty of our economic climate is not exactly reassuring for small business owners, who are already stressed under normal circumstances. It’s even more stressful for new businesses, because the first year of operations carries a lot of weight in terms of how the business will play out.

Neighborhood Comics rang in its one-year anniversary in the midst of a pandemic. We sat down with owner Lee Heidel to talk about the struggle of businesses during this time, shifting your focus, and what it means to be a leader. 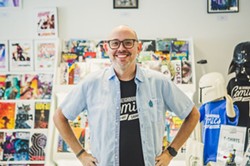 Thanks for asking. It’s a common courtesy that we always ask everyone how we’re doing, and I think that’s what’s made the last few months really hard—we’re just trained to always say, “Fine,” so we can keep the conversation going. It’s seemed like a loaded question these past few months.

The short answer is: I’m well. And the longer answer is: like everybody, there’s been a lot of challenges and adapting and learning over the past few months. That’s pretty exhausting to constantly feel like you’re having to change.

Neighborhood Comics on May 4 would have celebrated its one-year anniversary. As a relatively new business, the one-year mark is where you feel you got your feet underneath you and all of your processes are figured out, and maybe you’ve got a good crew and you’re feeling okay. We had all that good momentum and then had the rug pulled out from underneath us. All of a sudden, it was like a new day one of trying to figure out what is normal, what should we expect, how we budget for this, how do we take care of our employees? How do we survive, both financially and physically?

Everybody is dealing with this in different ways, and all of it gets tied up together really easily and quickly. Like it’s been for a lot of people, it’s been a lot of added stress. And the whole point of owning a comic book shop is to have a good time! It really runs counter to the vibe we’re trying to have.

What are some specific challenges that you’ve faced as a comic book shop?

It’s still a periodical business, so comics come out every Wednesday. Because of the pandemic, our distributor’s warehouses had to close, so the whole industry is backed up about two months. That has thrown the industry into a very weird place, because they didn’t even stop printing comics in World War II. It’s really had a major impact on the industry.

My silly little quote I tell anybody who listens is, “We pay our rent $4 at a time.” But it’s very true. You have your regulars who have their favorite books and buy them every month, and you have new readers who may be buying their first book. These aren’t for the most part big transaction we’re dealing with—they’re little ones.

Without foot traffic, that’s just been a sea change in how we make our money and where we see that revenue that we need to pay our rent and our employees. Because of the nature of our business that we do have so many regulars, the outpouring of support from those regulars during this time has been phenomenal. People calling just to check on us, pay for their preorders before they even get here, asking what they could do to help. That has been wonderful to see the community we’ve developed over the last year and been so grateful to be the recipient of their patronage. This is a business that is not a critical need—we’re not a grocery store, we’re not a pharmacy. It’s been gratifying for us to be able to see the fruits of that last year and know that people do appreciate the fact that we’re part of the community.

In a typical month, we would have six to eight events that are all geared around volume, to get people in the store. We’re adapting and trying to figure out when is it going to be safe, and we don’t know when to do any of those things again. What will normal look like when things finally do shake out? You figure out what you do well, and then you’re told by the world that you can’t do that anymore, for good reason.

Did you have to shift your focus as a business?

Oh yeah, 100%. Everybody is dealing with these new stressors in different ways. For me, it’s stress anyway, so you’ve already got the stresses of being a business owner and having a family and all the regular obligations, and with this, we knew right away that it wasn’t a time to sit back and rest. It wasn’t a time with the shop being relatively new and being dependent on the regular schedule of new releases that it was a time to double down and keep all of our social media as active as possible to keep reminding people that we’re here and even when our doors aren’t open, we can be a resource.

When we closed in early March, we pivoted to online sales, which we always offered. Online went from being none of our business to all of our business. Once the state opened up, we introduced a system of reservations to try to make people more comfortable. We’re starting to go back to normal. It’s going to be a long road.

What have you learned about yourself as a business leader during this time?

I think that, again, we’re still so new. Had we been more of an established business, and really set in our ways—which I hope we don’t ever get that way, I hope we always stay hungry and try to do things that are new and different—I feel like we pivot all the time anyway. We’re like, “Okay, this didn’t work, so let’s change it.” I think that has really reinforced some things, like our commitment to our employees, of making sure they’re taken care of.

When paychecks are coming in and all that is going like it should, there is a complacency to that. And when that rhythm is disrupted, when you’re having to cut hours or not see people or have your expectation of your responsibility as an employer and your involvement ... I think that was always one of the things that I dreaded the most from having a brick and mortar shop: management of employees. The unpredictability of people and finding the right fit, but we have had the same two core employees for almost the full year.

I think I’m willing to take the mantle of ownership of being a manager of people, of being a boss, and holding that in a different way than I had before. My first concern over all this wasn’t paying rent, it was, how long can we make sure they’re still getting paid? Can we pay them not to come in? Those were the first things that came to my mind.

What lessons did you learn during this time that you’ll adapt moving forward?

You don’t know how many things are going to be short-term and long-term. With comic books in particular, you judge a book by its cover; literally that’s what you’re doing. And the idea of seeing them in person, picking them up, browsing in that way can’t really be replicated when you’re just scrolling pictures on a website. We’re starting to focus on inventory that we feel like is going to be more secure. Everything from ordering decisions down to making changes on how we promote ourselves online, it’s hard to say what will stick.