SAVANNAH is in the middle of one of its frequent chicken-and-the-egg dilemmas.

Do marquee touring acts decide not to come to Savannah because the Civic Center Arena is so bad?

Or is the Civic Center Arena so bad because Savannah just isn’t a big enough market to attract marquee touring acts in the first place, regardless of venue?

The City is taking a very sizeable bet that the former choice is the correct answer to the fabled debate about which comes first, the poultry or its product.

How big a bet? At minimum, $140 million, to build a new arena on a mostly City-owned parcel on the Westside at Stiles Avenue, a site concept more than ten years and three City Managers in the making.

$140 million may not sound like an enormous amount of money until you consider the entire annual City of Savannah budget is about $360 million, which covers everything from cops to drainage to sanitation to potholes to street signs to staplers to coffee filters and everything in between.

While virtually everyone agrees the Civic Center is past its useful life, reasonable people disagree as to whether the proposed relocation —to Savannah’s most impoverished food desert, virtually devoid of business investment—is the best place to build a brand-new arena. 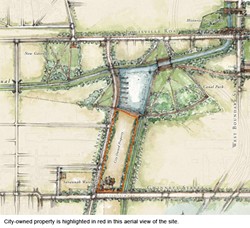 An aerial view of the proposed Westside site

Proponents say Savannah’s logical growth pattern is to the West, and taxpayer investment will kickstart much-needed investment in this poverty-and-crime stricken part of town. They say the new “Canal District,” with surrounding infrastructure enhancement, will form a pedestrian-friendly extension of downtown which is also close to I-16 for visitors.

Opponents say the site should be determined by where it will function the best, not by which part of town needs it the most. They say the safer and more cost-efficient choice is to keep the arena within the footprint of the Civic Center and parking lot. This would also be historically consistent, since the old Municipal Auditorium—built a century ago this year—was itself demolished in 1971 to make way for the Civic Center.

The $140 million figure is essentially only for capital construction, with $120 million of it funded by the latest voter-approved round of the Special Purpose Local Option Sales Tax (SPLOST).

I’ve long been skeptical of Savannah’s dependence on SPLOST money. I view it as a form of addiction.

SPLOST is always sold to the public, and always passes, on the basis that “It’s mostly tourists who pay it,” because it’s a sales tax.

Our dependence on SPLOST not only perpetuates a disproportionate focus on new construction, with the concurrent sweetheart deals and inevitable redundant “feasibility studies” by outside consultants to do what we already pay qualified City personnel to do.

Ironically, this helps contribute to entrenched poverty like that we see on the Westside itself.

Another problem, as local stalwarts like John McMasters and Jeff Rayno have warned since the beginning of Savannah’s romance with SPLOST in the 1980s, day-to-day operating and maintenance costs are by law excluded from the one-percent sales tax. (Please don’t call it a “penny tax!” That’s a euphemism to make it sound more palatable.)

You have to find operating and maintenance money elsewhere, either in revenue from event bookings or in.... more taxes.

You’d be excused for thinking the arena debate was settled by the SPLOST vote. While the sales pitch hyped the Westside site—complete with fanciful artist’s renderings of the urban utopia which would bloom there out of the vacant lots and weeds and shuttered buildings —the actual ballot language didn’t mention location.

So, new Mayor Eddie DeLoach, following up on statements he made during the campaign, is revisiting the site plan. He says it will be cheaper and will make more sense to build on the old Civic Center.

He faces opposition from Van Johnson, the City Alderman representing the Westside. Johnson says, not without merit, that it’s a bait and switch to move the site now, after people voted assuming it would go on the Westside.

Both men make very good points. In my mind the determining factor isn’t the cost of the new arena itself, but as the Mayor says, the potential ancillary costs associated with the Westside option.

If you read the fine print, the arena is only the first step, and it’s the only thing really funded by SPLOST.

None of that is cheap and my bet is little or none of it will be funded by SPLOST.

As for the issue of crime—of keeping arena patrons safe in one of the highest-crime areas of town—that’s a whole other ball of wax that will be part of the discussion.

To be clear, the proposed infrastructure upgrades would go a long way towards improving quality of life on the Westside. And if there is a part of town most deserving of taxpayer investment, the Westside is certainly it.

But technically, that’s not what taxpayers passed when they voted for the arena. They just voted for a new arena.

If the Westside is where it’s going to go, so be it. Let’s do as good a job as reasonably possible.

But everyone needs to be fully aware of the full cost of the project, and be aware that the Westside option will likely cost a good bit more than what you’ve been told so far, with results that are far from guaranteed.