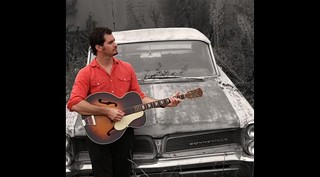 Todd Murray performs and records under the name Sincerely, Iris

One of the most interesting of Savannah's newest crop of acoustic artists, Sincerely, Iris makes music that gleefully gallops across easy categorization. These songs veer from spacey, modal musing to hyperdrive rock to highly melodic and structured pop, each with a lyrical knife's edge that puts them into that fabulously rich and never specific singer/songwriter territory.

Still, the most primal joy of The Great Unknown is in the fabric of the DIY recording itself - Todd Murray, who is Sincerely, Iris, has overdubbed every instrument, including bass, percussion, keyboards and electric guitar. His acoustic guitar is always in the forefront, using open tunings, octave chords, strange-sounding fingerpicking counterpoints, classical motifs and flourishes of jazz and flamenco.

Murray has been compared, frequently, to Jeff Buckley, and you can hear it in the yearning, almost melancholy of his lyrics and the moodiness of his vocals. "She Moves Me" and the exquisite, waltz-time "Dear Clementine" have echoes of early Gordon Lightfoot, and the spectral images of jazz-era Joni, non-twee Sufjan and early Iron & Wine appear from time to time.

The one I keep coming back to is "The Great Unknown," the album's title song. Starting with the nostalgic sound of a film projector, it's a road song - a salute, no doubt, to Murray's days as a Chicago-based traveler and ever-hungry touring performer. This song has a melody that won't leave me alone, and a brilliant guitar figure that evokes an open road, full of endless possibilities.

The past is only a fading ghost. So I give it away to the great unknown.

Along with Dare Dukes, whose second studio recording is due to arrive early in the New Year, Sincerely, Iris is evidence that Savannah, despite its ripe rock ‘n' rollers, eclectic hipster groups and the myriad other talismans of musical fertility, has one hell of an acoustic punch.

(The Great Unknown is available at sincerelyiris.bandcamp.com. Physical CDs, and ITunes availability, are forthcoming.)

"We always wanted to have a good balance of organic and synthesized sounds," Passafire singer and guitarist Ted Bowne says of the dub/reggae/rock band's fifth release, "and we finally had the chance to make that happen this time."

Start From Scratch is being released by Passafire's own label, FlameGuy, and the good news is that their winning blend of catchy and melodic uptempo tunes is a shade brighter and more exuberant with the addition of the occasional synthesizer, and banjo, and harmonica, and with the omnipresent organ thrust and parry of new member Mike DeGuzman.

Along with the mighty Kubley Brothers rhythm section (Nick and Will), Bowne and DeGuzman cut Start From Scratch at Sonic Ranch Studios in Texas, with producer Paul Leary (Butthole Surfers, Sublime, Meat Puppets). The masters were mixed and polished while the band was on the road all summer long on the Vans Warped Tour (their second such road trip).

Passafire began in Savannah in 2003, while Bowne and the Kubleys were students at SCAD. They still live here, write and rehearse here, but near-constant touring has them far from home for much of every year. The Start From Scratch tour will bring them back to Savannah in November, at a venue TBA.

Each successive Passafire record shows the band in a constant state of growth. Among the highlights on Start From Scratch are "Winter Wren," which bubbles along with a tight R&B groove before breaking out into a Dave Matthews-like rock ‘n' roll chorus; "Hard to Believe," propelled by banjo and organ; the poly-rhythmic and impossibly addictive "La Fuenta"; and the mostly-acoustic closing ballad, "Epiphany."

Reggae/rock is always buoyant, always fun, and (almost) always peppered with positive, cosmically-conscious lyrics. Start From Scratch, like the other Passafire albums, has all that in spades - and yet the band is clearly experimenting. In a good way. It's not that the guys are getting bored with their bread and butter - they're just adding new tastes to the spread. And that's a win-win for those of us who've always enjoyed the feast.