A painting exhibition of new works by local artists 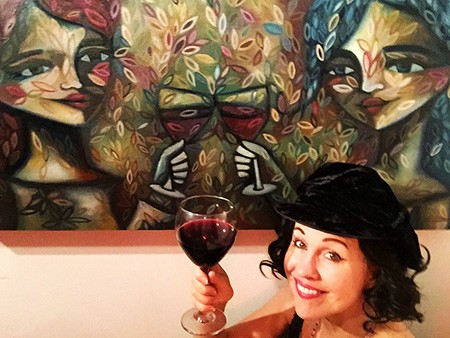 Photo Courtesy of Emmy
Emmy Dudley celebrates her exhibition at the Cedar House Gallery.
Thomas Mitz and Emmy Dudley share a mutual admiration for one another's dedication to art. With their radically different approach to painting—Mitz being deliberately meticulous and Emmy's work having a whimsical nature—their work finds commonalities in their ability to convey emotion through their complexity of art. Both Emmy and Mitz's collections have never been shown before. "We both are passionate painters and love painting," Artist Thomas Mitz said. "She's [Emmy's] one of the most dedicated artists I've met. She has her own style, she sits in front of the canvas and just begins to paint, while I do a lot of prep work on paper. I draw from life, and then I abstract it."
click to enlarge 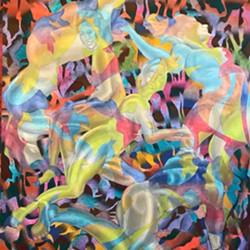 Photo by Thomas Mitz
"Riffing on mannerism," oil on canvas, by artist Thomas Mitz.
"Her [Emmy's] approach to everything is so painterly," Mitz said. "You have to have a passion to be a good painter. You can see the emotional depth; she's really good at painting." “Thomas is amazing in that he can realistically paint anything he wants," Dudley said. "His creativity shines through when he then throws bold colors and patterns on top of this his classical figures. The work he’s creating is quite unique and inspiring."
click to enlarge 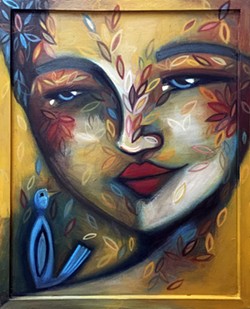 Photo courtesy of Emmy Dudley
"Summer," oil on wood, by artist Emmy Dudley.
Mitz is originally from Chicago, where he studied art under his mentor, the late blues player, and artist Bob Novak. Mitz is a painter, bassist, and avid cyclist. Six years ago, after living in New York, he moved to Savannah, where he first lived on 64th street and discovered the beauty of gardenias in his backyard. "I couldn't believe how beautiful they were, so I began to draw gardenias," Mitz said. "They're very sensual, they're like female figures to me, and I began to turn those into abstract paintings as well. Those are subjects that will be at the show, the figurative, horses and the floral paintings." Mitz has completed hundreds of figure studies in Savannah, which he turns into art from a creative multilayer composition process that involves acetate tracing. An approach that integrates the abstract into realism. "I took all of these figure studies I had done in Savannah—and New York—mostly Savannah," Mitz said. "I began to compose them as paintings, and those are the figurative paintings in the show."

"Round & Round," oil on wood, by artist Emmy Dudley.
Emmy Dudley "Emmy," who earned a Journalism/Fine Arts degree from the University of Georgia in 1992, is a fine art painter and screenwriter. Dudley works out of her home in Savannah, a converted art studio located in Paradise Park. This collection of paintings is a new body of work that she has been painting for a few years. "Basically, these paintings have been haunting me," Dudley said. "They are hanging all around my house which is my studio as well. I've been painting over them again and again for years. All these little, I guess you can call them colorful leafy bits, began to appear over my images. While I kept trying to take them away and fall back to my old technique, they continued to show up again and again. Now I’m embracing them, which simply feels like accepting change… and letting my paintings evolve exactly how they want to." "For me this new technique that I’ll be exhibiting, represents growth, change and going with the flow," the artist said. In Paris, Mitz saw beautiful bronze horses that were part of a fountain in the Luxembourg Gardens. He spent days drawing them and turned them into a series of paintings of carousel horses as a compassionate tribute to his former late love Kimberly. "The emotion comes from the color. The colors and images reflect just how I felt about this woman. Those are for her really," Mitz remarks. Dudley persuaded Thomas to show this body of work that has never been shown before. This show gave Emmy the platform to complete her new paintings from the last couple of years. Their latest works reveal their life experiences, from every day joyous moments to articulating love through art.
click to enlarge

Photo by Thomas Mitz
"Three men," oil on canvas, by artist Thomas Mitz
"I'm inspired by finding happy little moments and living in the now," Dudley said. "I especially love painting women and faces. It's so enjoyable to me, finding the beauty and balance there. Another big inspiration is always love… for life… for one’s self or another… and connection… connecting our hearts to everything and everyone around us." “New Paintings” by Thomas Mitz & Emmy will be on display at Cedar House Gallery June 18th-21th, 2021, with an artist opening reception Friday, June 18, 2021, at 5:00-9:00 P.M. 122 E. 36th St. near Thomas Park. Visit emmyfineart.com and thomasmitz.com for more information about each artist.