IN ITS annual "Your Driving Costs" study released in May, AAA reported the average cost of operating a car is $8,876 per year.

That’s a serious financial burden for many working people here in Savannah, according to Jen Colestock, who manages a new Savannah Bicycle Campaign program that accepts donated bicycles, reconditions them, and works with nonprofit organizations to distribute the bikes to people who need them. 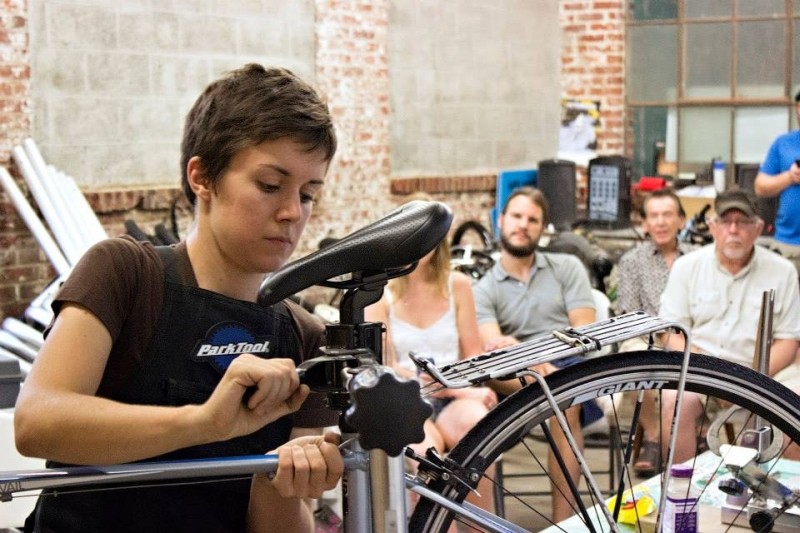 “The median income for a household in Savannah is $29,000. That makes the cost of driving a third of the average household’s income, not to mention those who fall under the median income,” she said. “Meanwhile, the average maintenance cost of bicycling is $300 a year — 30 times cheaper than a car, and less than a dollar a day. The major deterrent for low income workers is the cost of the bike.”

Giving bicycles to people, who cannot afford new bikes, removes “the stumbling block of that initial investment,” Colestock said. A lock, helmet and light set are provided with each bike.

The program is called New Standard Cycles and it takes its name from its location in a building that originally opened as a Standard Oil gas station in 1925. Later a car repair shop, it was recently rehabilitated by Ellsworth-Hallett Home Professionals.

While a student at the University of Georgia, Colestock volunteered with Bike Athens’ Bike Recycling Program, which is being used as a model for the Savannah initiative.

He has seen first hand how BRP has changed lives. As an example, Dewey offered the story of a man who was without a home, job or transportation.

“He had been in the military; but things had gone askew. While we refurbished his bike — a local agency had submitted a request on his behalf — he offered to volunteer.”

He found a full-time job and continues using the bike to commute to his workplace.

“It’s around the corner from my office and I still regularly see his bike locked to the rack out front,” he said.

Dewey said his most reliable volunteers are, “people who like working with their hands, and are likely cyclists who appreciate the opportunity to use their bicycle repair skills to give back to their community.”

Colestock said many of her volunteers are eager to gain those skills.

“Our volunteers learn how to fix and refurbish bikes and can use that knowledge to work on their own bikes,” she said.

“Our clients are continually limited by a lack of transportation. Often times, a client’s commute can be up to an hour and a half just to go a few miles via bus,” he said. “If they have access to bicycles, they can ride to more direct bus lines or to the job itself, thereby greatly reducing commuting time. Having a bicycle represents a greater sense of freedom for my clients.”

While Colestock’s program is focused primarily on providing bikes for adults, NSC volunteers refurbished 25 children’s bicycles for a Holiday Bike Drive. The bikes, along with helmets, were distributed to children through Blessings in a Book Bag on Dec. 13.

New Standard Cycles receives support from the Metropolitan Savannah Rotary Club, which selected the program as its annual service partner. NSC also benefited from a donation of tools and parts from the family of William Wallace “Bill” Brown. Known as “The Bike Man,” Brown reconditioned and gave away bikes for decades before he passed away in April.

Another donation from Trident Sustainability Group is funding the construction of a mobile repair station that can be pulled behind a bicycle to community centers and other locations, bringing basic bike repairs to people who cannot afford to have their bikes serviced at bike shops.

Along with providing a “steady stream of bicycles to partner organizations,” Colestock hopes to inspire Savannahians of all backgrounds to make bicycling a part of their daily lives.

“I can’t explain the amount of joy I feel being able to ride anywhere I need on a bike and being active and healthy enough to ride around this beautiful city,” she said.