A MAJOR renovation project that will add a much-needed multi-use, indoor/outdoor event space to downtown Savannah ran into continued opposition from a nearby church at last week’s City Council meeting.

What’s sometimes called the “Morris Complex” at Trustees Garden — named for local businessman and Connect Savannah owner Charles H. Morris, who spearheaded and funded the project— was granted a beer and wine license after the contentious hearing, the second such for the facility.

The event space centers on the renovation of two historic industrial buildings at Randolph and Broughton Streets at the foot of Trustees Garden, the Kehoe Ironwork building and the Kehoe Smithy.

The space, which includes an extensive outdoor area, is slated to host the marquee event in the 2018 Savannah Music Festival.

While the renovation has been in progress for over four years and has hardly been a secret, the New Shiloh Missionary Baptist Church on East Broughton Street only made its opposition public at the Nov. 9 City Council meeting, during a hearing on a proposed beer and wine license for the facility.

At that meeting, New Shiloh Pastor Tony Reddick and several church members spoke out against granting the facility any kind of alcohol license, and demanded a meeting with Morris to discuss the issue further.

Morris and his attorney had already removed the liquor component from the license request in order to comply with state law prohibiting distilled spirit sales within 100 yards of a church.

But at the Nov. 9 meeting, Mayor Eddie DeLoach nonetheless moved to continue the hearing for two weeks to give the parties a chance to meet.

While such a meeting did take place, when Alderwoman Estella Shabazz asked Pastor Reddick “if anything positive” came from his conversation with Morris, Mayor DeLoach cut in and said, “No ma’am. No ma’am.”

Reddick closed by saying, “I guarantee you if nothing’s done about it, then we have to take this to another level.”

However he did not clarify what that next level might entail.

Most of the church’s specific complaint has to do with safety issues of alcohol consumption during church activities.

However, several present, including City Council members, pointed out that events at the Morris Complex are unlikely to happen at the same time as services or functions at New Shiloh. 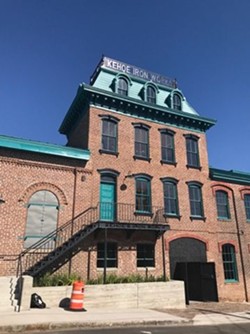 Reginald Franklin, a professor of journalism and mass communications at Savannah State University and a board member of Curtis V. Cooper Primary Health Center, addressed council as a “character witness” for Charles Morris.

“Mr. Morris is an exemplary corporate citizen in this town,” Franklin said.

“He has media outlets all across the South. He could headquarter Morris Multimedia anywhere, but he chose to headquarter here in Savannah because he loves this community,” Franklin said.

City staff reported to Council that Morris’s nearby event space, the Charles H. Morris Center adjacent to the Pirate’s House, has a blemish-free record regarding its own alcohol license.

The Morris project at Trustees Garden is being completed almost solely with private funds, unlike other high-profile taxpayer funded projects such as the overbudget Cultural Arts Center and the as-yet unstarted Westside Arena.

The meetings on the facility’s alcohol license opened an old wound on City Council involving larger disagreements over how alcohol is regulated in Savannah.

A recently revamped City alcohol ordinance never addressed the issue of licenses granted to establishments near houses of worship, a fact Alderman Van Johnson pointed out.

“We chose not to address this issue in our own ordinance, and to rely on state law,” he said.

Early this year, Johnson was opposed to an alcohol license for The Stage On Bay in a dispute with echoes of the controversy about the Trustees Garden project.

Alderwoman Shabazz said she shared Johnson’s concern, going so far as to say she would continue to vote against any alcohol license near a church even if it were permitted by law.

Somewhat incredulously, Stillwell responded, “You’re saying could Council enact an ordinance that would prohibit alcohol near a church? At present there is no such ordinance, so there is no basis for turning this particular license down.”

Shabazz, while appearing to acknowledge that the New Shiloh situation would likely be unaffected, urged the Mayor to explore the issue further in the future, and DeLoach agreed.

In the end, there was simply no legal basis to deny Morris the beer and wine license, as his own attorney, Harold Yellin, pointed out to Council:

“Under Georgia law there is no distance requirement between this facility as I’ve described it to you, and a church. This is not a new law,” said Yellin.

“We would ask that since the petitioner meets all requirements of state and city law that the petition be granted,” he said.

And it was — except with the dissenting voice votes of Shabazz and Johnson.

Before the vote was taken, Alderman Julian Miller seemed to sum up the feelings of the Council majority when he said:

“We have an obligation to fulfil our side of this... I’ve gone through that facility and it is an amazing testament to the city of Savannah... I think we have no choice but to move forward.”