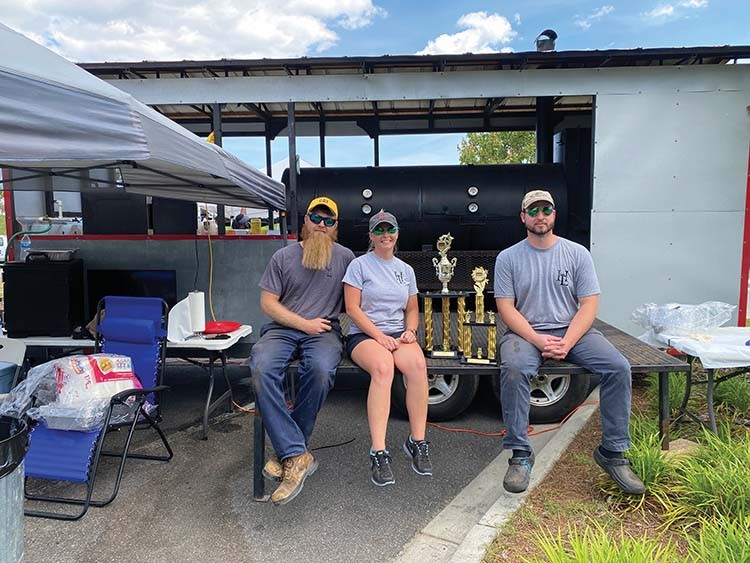 Photo by DJ Hellerman
HunniLovins BBQ owners Kevin and Candace Hunnicutt and Brandon McElveen claim their first place title May 15 at the King of the Hog event.
DJ Hellerman HunniLovins BBQ is officially Savannah’s “King of the Hog!” The young BBQ operation earned first place in the judges’ pick and the popular vote in the second annual King of The Hog BBQ competition presented by Savannah Harley-Davidson. The competition was organized to support and bring awareness to The Georgia Down Biker Fund, a non-profit organization dedicated to providing financial assistance to injured bikers and their families during times of hardship resulting from a motorcycle accident, said Colleen Cote, marketing manager and Hog Liaison for Savannah Harley-Davidson. From 11 a.m. - 4 p.m., May 15, a group of local BBQ operations handed out samples as they tried to earn the most votes. The weather was perfect for Harley riding and the competition was so well attended that BBQ samples were running low. “Bringing community together is what we are all about and what better way than with BBQ?” Cote said. TGDBF supports bikers living in seventeen coastal counties and they help cover expenses related to accidents like groceries, utility bills and transportation to and from the hospital. Since 2014, the fund has helped with expenses for over 80 different accidents. “We had a great time at the King of Hog BBQ Contest at Harley Davidson,” said Cindy VanNorman, Corporate Secretary of TGDBF. “The food was delicious and the music was great. We were able to meet and talk to a lot of wonderful people. A big thank you to Colleen Cote and Savannah Harley Davidson for donating proceeds from the event to The Georgia Down Biker Fund, Inc. We would also like to thank Marcus Dove Kustom Hustle Tattoo and others who made donations or purchased a patch or t-shirt. Without everyone’s support, we would not be able to support the people that need it.”
click to enlarge 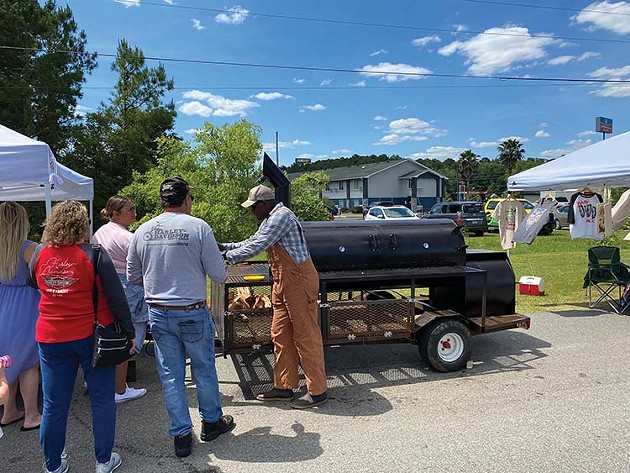 Photo by DJ Hellerman
Zachariah Parker of Smokin’ Jean’s Bar-B-Que provides samples to attendees May 15 at the King of the Hog BBQ competition.
The annual King of the Hog competition started in 2019, but was postponed last year due to COVID-19. The returning champions, The Meat’n Spot, took second place this year and they were voted best BBQ sauce. All Fired Up was awarded third place. Making award-winning BBQ is time consuming and a team effort for Brooklet-based HunniLovins BBQ. Kevin and Candace Hunnicutt - the Hunni - and Brandon McElveen - the Lovins - arrived at Savannah Harley-Davidson at 8 p.m. Friday evening to set up and they started cooking at 10 p.m. to be ready for Saturday’s 11 a.m. kickoff. Well, it paid off. Hunnicutt is thankful everything went their way this year. “We had a great time at the King of the Hog competition,” Hunnicutt said. “We have been working hard on getting everything just right, and it seems as though the stars aligned for us this time. Our biggest goal is to get the HunniLovins name out in the community.” This year’s BBQ judges included Kotter and Marshall from Rock 106.1; Ben Troupe co-host of ESPN Coastal’s Flagship Program “Three and Out”; Colleen Cote, Marketing Manager and HOG Liaison at Savannah Harley-Davidson’s; Jeff Tuck; Elaine Martin, founder of Low Country Biker; Anthony Lanier, defensive end for the Saskatchewan Roughriders of the Canadian Football League and Sheriff John Wilcher of Chatham County. The community events at Savannah Harley-Davidson are for everyone Cote said. “Whether you ride or not, everyone is welcome at all of our events,” she said. “The Georgia Down Bikers fund is an amazing organization and we are so proud to support their work. At Savannah Harley-Davidson, we believe in giving back. If there is ever an opportunity to support the community and bring people together, we are there.” Mark your calendars now, and get your BBQ recipes in order, Savannah Harley-Davidson is excited and already planning for next year’s competition. For information about King of the Hog visit kingofthehog.com. And for information on TGDBF check out facebook.com/downbikerfund.