What sorts of people do you see in the neighborhood? A dad pushing a stroller down the street? We’ll say it’s a double stroller containing his twins. Its wide wheelbase makes it difficult to maneuver it along the sidewalk.

A young woman out for a run, her stride keeping pace with her iTunes playlist? Maybe she gives a thumbs-up as she passes a friend who’s running in the opposite direction.

How about old friends out for their morning constitutional? Perhaps they’re passing their phones back and forth as they walk, sharing photos of grandchildren who will be visiting at Thanksgiving. 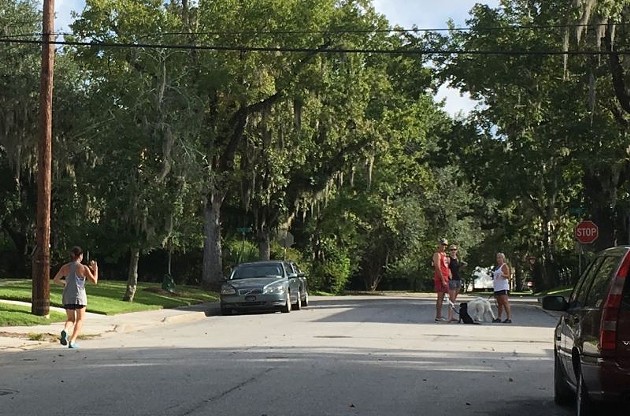 Negligent or neighborly? What kind of activities should we encourage and which should be discouraged on residential streets?

I attended most of the Savannah Forward meetings over the summer and I watched again and again as people stood up to plead for safe, comfortable neighborhood streets so they could be just like the people I have described above.

A community where people of all ages and abilities feel safe exercising and interacting with their neighbors is universally understood as a good place to live.

Yet in a recent Facebook discussion about my real neighborhood, healthy and neighborly behaviors such as these were described as bad, “undefendable,” and negligent.

People who walk and run in my neighborhood were commanded to remain on visual and auditory high alert. That means no looking at phone screens or using ear buds.

They were admonished to stay on the sidewalk. They were instructed to always walk or run facing oncoming cars.

Others joined in to vilify people for feeling comfortable enough to go out for evening strolls or morning runs on neighborhood streets, by calling them idiots, suggesting they be punished by “courts and government,” and accusing them of endangering their own children.

As is often the case in social media discussions about people who walk and ride bikes, traffic regulations were cited, chilling anecdotes about close calls with people who “step off the curb and don’t look” were shared, and the condition of neighborhood sidewalks was debated.

The consensus was summed up by one of my neighbors who suggested that, “walkers are not paying attention” and that, “if you’re going to do it [walking in your own neighborhood], do it the right way.”

Why all these dire warnings? Well, the original post buried the lede.

Not until the final sentence of the original post do we learn why people who dare to enjoy the streets of my neighborhood must be constantly vigilant and always on their very best behavior: “Many drivers are playing with their cell phones while cruising around.”

Only once during the discussion did anyone suggest that something should be done about distracted driving. The idea that people will be staring at their phones while driving, often in excess of the speed limit, was accepted as an unavoidable condition.

After reaching such a conclusion, the next step is shifting blame to the potential victims of these irresponsible motorists.

Listen, it’s my job to educate people on how to stay safe while walking. I endorse using sidewalks (where they are available), staying alert, and walking facing traffic (the opposite is true for bicycling) as helpful strategies for reducing risk. And I truly believe the Facebook discussion was started with good intentions.

People who are paying attention and driving at appropriate speeds will have no trouble seeing and slowing for people pushing strollers, walking dogs, playing ball, or socializing with their friends, even if these folks are not doing it “the right way.”

While not advisable on major arterials or limited access freeways, these are natural occurrences on neighborhood streets and indicators of a sociable, healthy, and appealing place to live.

Recasting these beneficial and normal activities as harmful and undesirable not only accepts and excuses the real source of danger, irresponsible drivers, it relinquishes our streets to them.

By doing so, we reorganize the hierarchy of neighborhood streets to prioritize cars over the people who live there.

While I’ll continue to be careful while I’m out walking and bicycling, and encourage others to do the same, I can’t get on board with scolding my neighbors for listening to music or walking on the streets where they live.

Instead, our attention should be focused on stopping those who operate their vehicles in ways that show insufficient concern for the safety of a neighborhood’s people, pets, and property.