Nightingale News can save your life

From bassist to poet to folk frontman, Coy Campbell is ‘home to stay’

“I live between the widow of a preacher, a cab stand slash junkyard, and an abandoned school,” the Nightingale News frontman says in awe. “Could there be a better place?”

For a songwriter enamored with the shady underbelly of Southern lore and the shadowy and sinewy moments of a folk song? Certainly not.

This is a crucial moment for Campbell: his first songwriting effort as Nightingale News, Bell Rope, is recorded and mastered. While cassettes are available locally, he’s holding off on an official release until he finds the right label. With a work of immense personal significance, he’s passionate about sharing Bell Rope in a way that best honors it.

“Ultimately, I ended up in Savannah questioning my existence,” says the Lowcountry native, who moved back in 2013. “I was either going to drink myself to death or jump off the bridge.”

“I said, ‘I have to leave something—a record, a book, a document.’ And Savannah opened me up. It happened for me here, and this record saved my life. It showed me that I’m capable.”

It’s what makes finding the right platform to release Bell Rope so important.

Essential to the project’s evolution was establishing a full band to support the album’s immersive rich sound. Saturday marks the first show with Nightingale News as Campbell envisioned.

For his live band, Campbell has called upon Savannah’s Americana and country pros: Clouds and Satellites’ Markus Kuhlmann on drums and vocals, The Train Wrecks’ Stu Harmening on guitar, Rachael Shaner on double bass, and Damon and the Shitkickers’ Igor Fiksman on pedal steel.

“It has to be this way—having a living, breathing band,” Campbell says resolutely.

He couldn’t be more pleased with the lineup; each performer follows the album as a template, but still maintains a command of their artistic self.

“Rachael comes from a symphonic background,” Campbell offers as an example. “She understands blend—she’ll play the melody that a slide guitar does on the record.”

It’s an odd full circle for Campbell to have completed—he didn’t necessarily expect to find himself back here, playing his own songs for such a supportive community.

Campbell grew up in Savannah and left to study music at University of New Mexico. While there, he honed his double bass skills and began performing and touring with singer-songwriters.

After undergrad, Campbell headed north to Seattle, right at the birth of the slam poetry and spoken word movement. He fondly recalls the incredible opportunities presented by a place abuzz in a creative moment, much like Savannah’s current music scene.

While in Washington, he wrote three manuscripts of poetry. Though he still gigged, coming right out of a formal music education presented its own challenges.

“I couldn’t listen to music without analyzing it,” he says. “It’s like my music education got in the way of me being able to enjoy music.”

Campbell immersed himself in literature while continuing to act as a gun-for-hire bassist.

Then one day, he wrote a particularly terrible poem.

“It was bad—really bad,” he remembers. “But there was a guitar there. And I said, ‘this would make a really bad country song.’ So I sat down and wrote. And that felt really, really good.”

Missing the South, Campbell relocated to Athens in 2005 and started playing shows as a singer-songwriter. While the chance to move back was a welcome change, the depression that he had intensely struggled with in Washington followed him. Working for minimum wage and struggling with drinking, he found refuge in the Athens Symphony, playing double bass.

In addition to the Symphony, Campbell credits his survival to Athens’ Nuçi’s Space, a nonprofit organization dedicated to helping musicians find treatment for depression and other disorders.

“If I had lived in any other city, I would have died,” says Campbell. “I owe everything to them. They got me counseling and affordable therapy, and showed me that I didn’t have to leave music; they helped me choose to get well.”

To this day, Campbell carries Nuçi’s Space stickers with him to help spread the word to those who may need similar assistance.

With their help, he quit drinking and moved into a farmhouse on the outskirts of Athens to start over. Much of his family had moved back to the Savannah area, and Campbell soon followed suit, planning on getting construction jobs, saving up, and moving to New York. By chance, he met Markus Kuhlmann at the Coffee Fox, who, in turn, introduced him to Jon Waits. Waits was building a band of his own, and he and Kuhlmann introduced Campbell to Savannah’s diverse music scene.

Soon, Campbell was back to his roots, playing double bass in Waits & Co. While he’s since amicably parted ways with the group to pursue Nightingale News and new project Curb Dogs (he’s on electric bass), the experience was invaluable.

“I learned to cut loose with a bow and use the instrument—it really informed my singing,” he says. “That kind of confidence, learning to keep it realistic, and believing in myself, one step at a time.”

Now, Campbell feels uplifted by the supportive and inclusive music scene and is home to stay. He marvels at Nightingale News’ opportunity to perform with American Aquarium; since discovering their latest album, Wolves, he’s come to admire BJ Barnum and company’s hardworking, DIY efforts, and hopes to follow a similar path.

“Next year, I want to be on the way to South by Southwest,” he attests.

“It’s those island hopping opportunities: the next destination has supplies and instructions. It just takes a lot of sailing at night alone.” 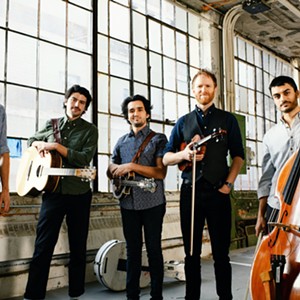