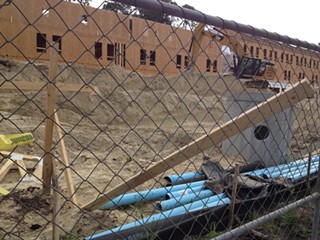 A couple of columns back I alluded to a sudden and disturbing change in midtown Savannah's suburban skyline.

I'd been aware of the construction happening on 61st and Abercorn for some time, ever since I went to walk the dog in our favorite vacant lot and found one of Savannah's most glorious live oaks dead on its side, its trunk sheared unmercifully into pieces.

I swallowed my grief, understanding that this property had been slated for development for years and that the mutilation of a centuries-old tree was no match for the bulldozers of progress.

Then I came home from a week away to find that a massive, three-story monstrosity with a steep, pitched roof had been built on top of a six-foot tall mountain of dirt. The new structure glowered down on Habersham Village and the surrounding mid-century neighborhood like a plywood Castle Grayskull, the sky darkening with the frames of two more just like it.

I asked my neighbors on both sides if they knew anything about this, which they hadn't. I stomped up and down the street and found my neighbor Gerald Eason sitting on the front porch of the home he's owned since gas was forty-two cents a gallon. I begged him to excuse my outrage, as he'd probably seen plenty of change in the neighborhood over the past 40 years.

A man of few words, Mr. Eason squinted into the afternoon sun and replied, "Nope, not 'til now."

I shook my fist and flipped double birds at the hardhats on the roof for a long while. Then I went inside, shut the blinds and started asking questions.

How does architecture tall enough to be seen from the Talmadge Bridge (truth!) suddenly appear in Savannah, where you can barely build a birdhouse without getting slapped with a zoning violation? Did I miss an email notifying me that my bedroom windows were now up for show? Is the height of this "humming behemoth" (a fitting descriptor by another neighbor, Bill Metz) even legal in this area?

I started with the website Avenueson61st.com. The project is owned by Atlanta-based Chance Partners, a group that prides itself "on developing communities that seamlessly intertwine into their surroundings." These guys must have advanced degrees from Hogwarts, because it would take a magician to "seamlessly intertwine" a 3-story, 47-foot apartment building into a residential neighborhood full of squatty, single-story brick ranch houses.

Touted as "luxury student living," the development is definitely not the high-end condos that were rumored to replace the north end of the former Abercorn Terrace. This pad of concrete has seen a lot of action since it was purchased by Cathy Dunn in 2007, including the evaporation of that condo deal, an illegal skatepark and the tragic suicide of a Savannah businessman.

SCAD spruced up the rest of this once hella sketchy collection of two-story duplexes a few years ago (leaving the trees, I might add.) That rehab was a welcome change and has certainly contributed to the resurrection of the HabVil commercial district. The new complex's 128 new residents will surely boost business for nearby shops and restaurants.

Still, it must be noted that there is no college campus within miles. In fact, with the exception of Savannah Arts Academy, the only schools within the macro-block of Victory/DeRenne/Waters/Bull still serve cookies at snacktime.

So I contacted my district representative, Mary Ellen Sprague. She replied quickly that she had seen the project on paper, but when she stopped by and saw how the façade ate up the lane and backed up to my neighbors' yards, her eyes widened. "Yep, that's pretty huge."

I put in a call to Metropolitan Planning Commission director Thom Thomson, who informed me that no, the dog hadn't eaten the notice put through the mail slot; we were never sent one. Only property owners whose homes fall within a 200-foot diameter of the center of the development were notified as a "courtesy."

(Thomson apologetically explained that once the ever-in-progress Unified Zoning Ordinance is finished, the notification radius will be bumped to 300 feet. That still doesn't seem sufficient to prevent unpleasant surprises. May I suggest an amendment to the UZO that states if a person's windows are within peeping distance, courtesy would dictate that they be informed.)

As far as the elevation of the project, a conversation with city zoning administrator Geoff Goins revealed the area has been zoned for 40 feet since the mid-1960s, just no one had the chutzpah to dwarf the rest of the surroundings until now. The finished product appears far taller, sitting on top of its own little mountain.

Baffled at how that big berm got approved, I sought out the final engineering plans at the city's Development Services Dept. Permit administrator Alvin Mcgrath showed me on the plans where the Stormwater Dept. signed off on the raised ground elevation, and consoled me with a sketch of the detention pond required to prevent flooding. (This area is already slated for an enormous drainage undertaking by the city in 2014.)

All these folks were very nice as they explained that as unfair as it may be that what was once a quiet family street is now going to be dominated by extra cars, lights and inevitable keg parties, it appears that Chance Partners ,when it came to seamlessly intertwining itself into the neighbohood, subscribed to the old adage, "It's easier to get forgiveness than permission."

Though a few crape myrtles were thrown into the plans as a cursory buffer, Citizens Office director Susan Broker has suggested that Georgia Power might be convinced to allow taller trees so the rest of us might have a modicum of privacy. A 15-foot fence at the developers' expense that prevents any cut-throughs should also be on the mitigation table.

There may be a small snag for the developers: Up until last week, the site advertised each room with a separate lock and a separate lease. A facility that rents by the room is considered a "rooming house," and comes with its own zoning and parking restrictions.

On Friday, assistant city attorney Lester Johnson sent Chance a letter informing that their business model violates the current zoning. As of Monday morning, the leasing agent was still cheerily offering one lease per room. My guess is that Chance has the lawyers, guns and money to find the loophole that puts the extra cars on our street and in the HabVil parking lot.

Alderwoman Sprague says she was told these were going to be multi-family apartments. There was no mention of the rent-by-the-room operation in the initial request nor in the MPC site plans. Perhaps a convenient omission on the part of Chance Partners, though an apartment complex comprising only 4-bedroom units should have been a red flag.

The gut-punching irony is that if my neighbor Mr. Eason or the rest of us wanted to build a carport over our driveway or cut a door to the garage, we'd be tied up for months with fees and paperwork.

But an out-of-town developer can swoop in and change the face of an entire neighborhood on a dime while city officials shrug their shoulders. Hope they'll remember this tale when the bulldozers of progress find them.

At a public meeting Thursday night, some called for a stop-work order, but then we'd just be left with half-finished, Tyvek-wrapped ugliness. Better to focus on the positive; at least we're not being fracked.

I'm already planning to put on quite a show from my bedroom window.

What would you do if this went up near your house?

Spring in Savannah, new and improved

More »
More The (Civil) Society Column
All Community
Comments (4)
Add a comment
Subscribe to this thread:
By Email