HERE’S THE most important thing that we learned from last week’s meeting of tour guides versus downtown residents complaining about the loud, obnoxious nighttime tours in the Historic District, especially pub crawls and ghost tours:

The number of offending tour guides is very low, perhaps four or five (out of hundreds). This is documented by an earnest downtown resident who is having problems and started taking pictures.

And the number of downtown residents filing the bulk of complaints is similarly low, although I’m less certain of this number.

So here’s the second most important thing that we learned from that meeting: This isn’t tour guides versus downtown residents at all. 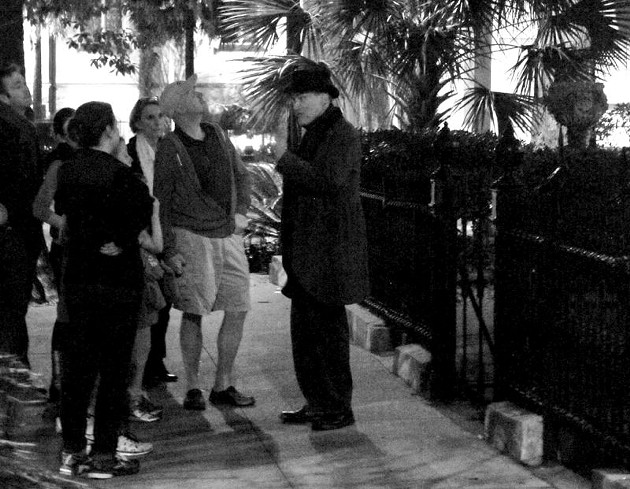 Photo courtesy Chase Anderson
"We can solve a lot of issues downtown when residents and ghost tour companies work together,” says Chase Anderson.

The night’s biggest applause came when a pissed off Greg Proffit, a veteran Savannah tour guide, said “Let’s get the bastards who are doing it!”

Why is this important? The City of Savannah is considering new rules that would further restrict where and when tour guides can operate.

And this is where I tell you that I’m a tour guide myself, although I don’t operate at night, when it really riles people.

Based on what residents said at the meeting, I’d be riled, too: Tourists peering into your window at 12:30 a.m., boozed up and laughing. Tour guides talking so loudly you’ve memorized their lines. Maxine Pinson has lived at the corner of State and Lincoln Streets for four decades.

“It’s like an invasion,” she says. “We have the right to peace, quiet and quality of life.”

No one deserves to have that outside. Tour guides applauded her, as well. But here’s where I think things start going wrong: battle lines get drawn, people get defensive and talk gets hot.

Photo courtesy Maxine Pinson
Downtown resident Maxine Pinson captures images of loud, drunken and obnoxious visitors, although she says for most “You don’t even know they are there.”

And there’s a lot of hot talk with this issue. Patrick McDonald, another veteran tour guide, threatened a lawsuit if the city goes forward with its plan to restrict, even more than already is restricted, what he calls his First Amendment rights.

“I’ve watched as our operational area has gotten smaller and smaller,” he says.

He’s right that Savannah already has nightly restricted tour times and areas. The new proposal increases those areas to include desirable locations on President Street and Calhoun and Monterrey Squares and desirable times starting at 10 p.m.

But he’s wrong that commercial activities are like religion and press. In fact, the City could limit tours even more severely than they’re proposing.

That’s the nightmare scenario for tour guides, as expressed in a hot WTOC story that rattled many, when David McDonald of the Downtown Neighborhood Association was quoted as saying that the new proposal is a pilot and that “We would like to see it throughout the entire downtown residential area.”

That’s people’s jobs. That’s the cleanest, easiest damn cha-ching we got. I mean, you talk and walk for 90 minutes and people give you money. And it enhances our destination experience for visitors.

Does anyone else find this frustrating? Again, we’re talking about less than five offending tour guides. Why not just find a way to shut them down? Tonya Harding, a good lawyer, old fashioned shame.

Perhaps from the desk of a jaded City Hall bureaucrat the situation looks like “There’ll always be bad apples and complainers. My job is to have a rule for them.”

And so here’s the last important thing about the meeting: It looks like City officials are slowing their rule-making to get the two sides together.

Hopefully, cool heads will prevail in this.