HE TOOK A SIP of coffee from a travel mug as he leaned against the tailgate of his truck, then glanced down at his smartphone and chuckled. It looked like he was having a pretty good morning.

I was seconds away from ruining it. 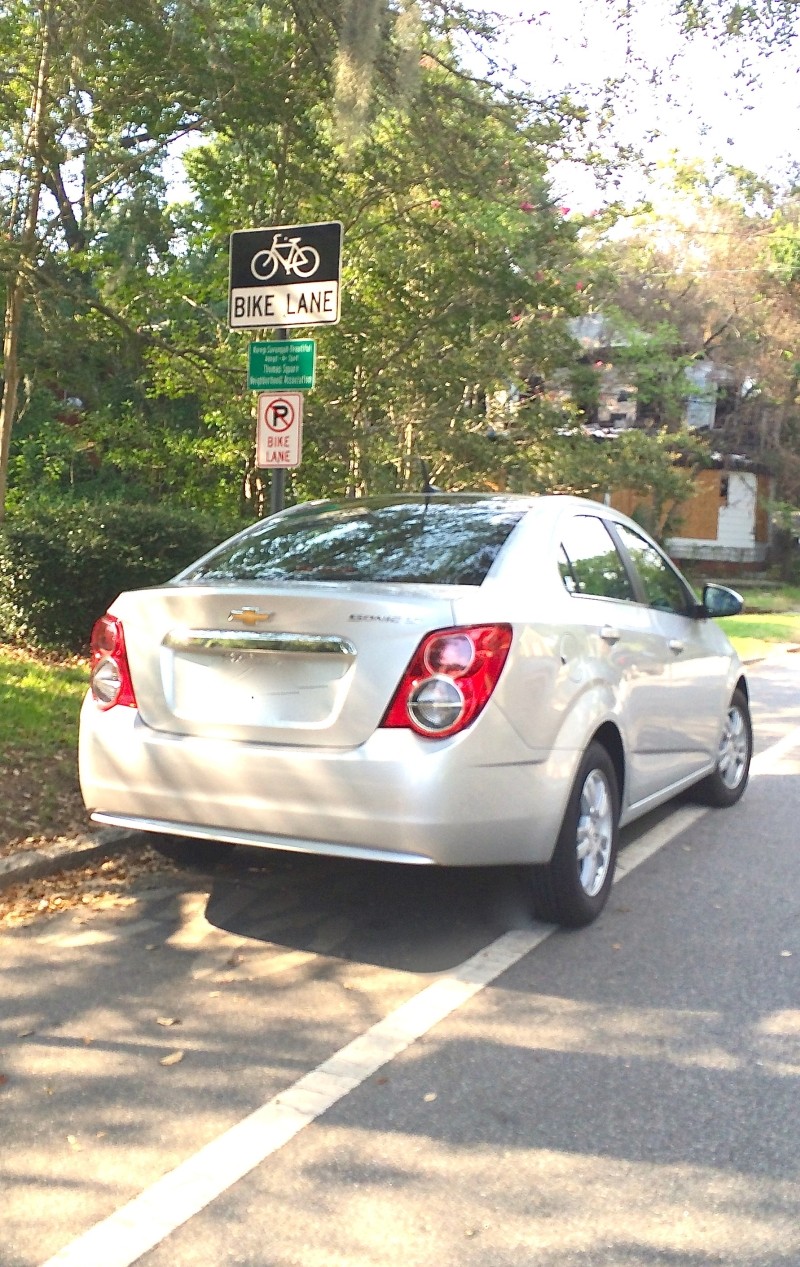 Seriously, don’t park in bike lanes. Not cool, not cool at all.

I didn’t want to invade his personal space, so I stopped my bicycle several feet away from him. “Good morning,” I said, smiling. “Would you mind moving your truck out of the bike lane?”

This was a polite request. Not a demand.

He stared at me in utter disbelief and I felt compelled to explain why I was asking.

I said, “This is the only bicycle lane leading into downtown. A lot of people use it. There are plenty of open parking spaces just over there.”

I pointed at the curb across the street, less than 20 feet from where we were standing.

“There were cars parked there when I got here,” he snarled. “I’m waiting to meet someone.”

“Oh, OK,” I said. “But there are no cars there now and I’d really appreciate it if you could help me out here.”

He shook with rage. He was so angered by the audacity of my suggestion, he couldn’t even speak. I decided to continue on my way, fearing he’d blow a gasket if I remained in his presence.

Believe it or not this is one of the more pleasant encounters I’ve had with someone who was illegally parked in a bike lane. On one occasion a motorist said he’d be happy to move his car out of the bike lane, then use it to run over me.

I’ve even seen people argue loudly with a uniformed Savannah Chatham Metropolitan Police Department officer, who dared to suggest they move their cars. He didn’t threaten to write citations or have their cars towed. He simply asked them to clear the bike lane.

Since enforcement is rare, people become accustomed to leaving their cars in bike lanes when they are visiting friends or waiting for their kids to get out of class. Others simply don’t want to bother looking for a legal parking space.

If you’ve parked your car in a bike lane on the regular for years without suffering any negative consequences, I guess it can be unsettling if a police officer, or worse, a civilian suddenly asks you to move it.

And, really, what’s the big deal anyway? People on bikes can just ride around parked cars, right? Yes, but by doing so they are engaging in an activity that is contrary to best practices for safe cycling.

Bicycle safety education efforts urge people to be visible and predictable when they are riding their bikes. If they are forced to move in and out of bike lanes to avoid parked cars, their ability to be either is greatly diminished.

Another unfortunate effect is less easily quantified. Tolerating bike lane parking signifies that motorists’ dominance of our streets extends even to the very small portion of our roadways designated for people who ride bikes.

How small? Add up every street within the city limits and you get a total of around 730 miles, measured by centerline mileage. Less than 20 miles of the network are equipped with bicycle lanes. We don’t have any local examples of protected or buffered bike lanes, which have become wildly popular in other cities.

Parking in a bike lane conveys the idea that a car, even at rest, is more important than everyone who is legally permitted to use that space. Similar messages are transmitted by people who use rakes (or more often, leaf blowers) to move trash and debris from their yards into bike lanes.

I talk with people every day who want to make bicycling a healthy part of daily life, but are concerned about sharing streets with cars and trucks. What would make them more confident and comfortable riding their bikes to work, to school, to the store, or to church? Overwhelmingly they tell me: More bike lanes. Like, now. They are keenly aware our bicycle infrastructure is not keeping pace with levels of cycling in our city.

When people encounter parked cars, damaged street surfaces, piles of trash and other hazards that prevent them from safely using our few existing bike lanes, they become rightly discouraged.

Removing these barriers and acting swiftly to satisfy latent demand for new bicycle facilities is necessary to encourage cycling in Savannah, which makes our city safer, healthier, more attractive and more prosperous.