In this vintage photo, Suzanne Braddy teaches a ballet class that includes young Gabrielle Lamb (she's third from the right).

The title is The Nutcracker in Savannah, but it might as well be called The Savannah in Nutcracker. Because there’s an awful lot of Savannah in this elaborate retelling of the holiday dance classic.

Not only that, the 80 dancers that comprise the cast of the Savannah Danse Theatre’s 2009 show have an edge over all that have come before: This is the only local Nutcracker performed with live orchestral music.

For the second consecutive year, the Savannah Philharmonic will play Tchaikovsky’s beloved score as the Sugar Plum Fairy, the Cavalier and the big bad nightmare rats–with–swords ballet it up on the Lucas Theatre stage.

Company director and choreographer Suzanne Braddy, who auditioned dancers from every step and stripe of Savannah life, has been doing The Nutcracker in Savannah since her Danse Theatre’s inception in 1998. This is the fifth season she’s used live music.

Braddy, a veteran dancer–turned–teacher who runs the Islands School of Dance (the Danse Theatre is her performance branch) devised the plot, which turns the well–worn tale of little Clara and her holiday hallucinations into a strictly local adventure.

“I thought, how magical it would be to be to have what they’re doing based in Savannah,” explains Braddy, herself a Savannah native. The performers range in age from 3 to 25.

The Nutcracker in Savannah is set in 1945, when the city was just another sleepy Southern town.

“I use the Gingerbread House on Bull Street. It’s a Christmas Eve party there, and a lot of the characters there I’ve named after people in Savannah. The large rats are called the Savannah River Rats. All the scenes and places have Savannah names.”

There are always guest performers — one memorable production, none other than Paula Deen attended the “party” and placed the Christmas crown on Clara’s noggin.

For several years, ice cream magnates Stratton and Mary Leopold not only danced in the production, but brought their own delicious cold stuff to the famous “Land of the Sweets.”

Stratton Leopold’s out of town this time, but Mary will be there, and she’ll crown Clara, who’s being danced by Islands Dance student Sophia Morekis. Rin Richardson plays Clara’s brother Fritz, with Peter Base as the Nutcracker Prince.

Among the guest dancers for this year’s production are Gabrielle Lamb, another native of Savannah, and a former soloist with Les Grands Ballets Canadiens (an aspiring filmmaker, Lamb also worked as the company’s official videographer).

“I haven’t had the chance to dance in Savannah since I was 15 years old,” says Lamb, who’s currently dancing with the New York–based Morphoses/The Wheeldon Company. “And I’ve never danced at the Lucas before. It’s very exciting, especially since Sue was one of my very first ballet teachers, and the one who first inspired me to become a professional dancer.

“She was a member of the former Savannah Ballet, when she was teaching me; and I used to sneak into her dance bag in the dressing room and try on her pointe shoes. I remember being thrilled to see her onstage as the Snow Queen in Nutcracker.”

Lamb won the 2009 National Choreographic Competition, and will create a new work at Hubbard Street Dance Chicago in the Spring.

For The Nutcracker in Savannah, she’ll perform the lead in the “Arabian” sequence.

Jesse Benoit (dancing the role of Drosselmeyer) began his career, like Lamb, with the Savannah Danse Theatre, and went on to perform with Louisiana’s Baton Rouge Ballet Theatre.

Troy Davis operates a dance school in Orlando, Fla., where he spent 14 years as dance captain and performer at Walt Disney World.

Dancing the coveted Snow Princess role is Brittni Linton, a sophomore majoring in dance at Savannah Arts Academy. She has been with Savannah Danse Theatre for eight seasons.

A former company member of Columbia City Ballet, John Cronin is the King of the River Rats in Braddy’s production.

Joulia Moisseeva, a Russian–born dancer, teacher and choreographer, has designed several sequences for The Nutcracker in Savannah.

The scene changes are done primarily through elaborate “drops” — huge painted backdrops that are changed for each scene.

“I just thought, Savannah — you could not go wrong. I would love to re–create the Forsyth Park fountain, and have it glassed over with snow during the snow scene,” Braddy says.

“But I do have lovely drops and I’m grateful. And this has been a real unique year because of everybody’s money situation.”

In fact, money — rather, the scarcity of money — has been the only thing that’s kept Braddy’s prolific imagination from running wild.

“Every year that goes by I think ‘Why have I done this?’” she says. “It’s not that it’s hard, because I have no problem with imagination. It’s the money to create it. We want Candy Land to be the Land of the Sweets on Broughton Street, and I don’t have the money ... but that’s for the future.”

Braddy doesn’t have a problem about making wholesale changes to a ballet that’s known and loved the world over.

“I  feel confident about it, because each year — through the beauty of the Internet and dance magazines — you can see that every town, now, is starting to take on a different Nutcracker. There’s a dance company in L.A., and because it’s predominantly Latin, they do it as The Neighborhood. And it’s very successful.”

Meanwhile, she and her staff are running themselves ragged trying to get the 2009 The Nutcracker in Savannah off the ground.

“It’s a lot of work,” Braddy says. “Sometimes you feel like the kids don’t appreciate it, like they don’t really know what you’re doing. But they all do at the very end.”

With the Savannah Philharmonic Orchestra

Where: Lucas Theatre for the Arts, 32 Abercorn St. 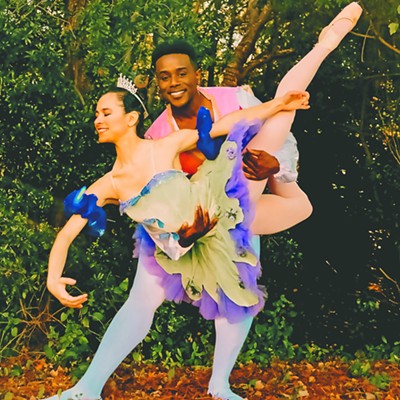