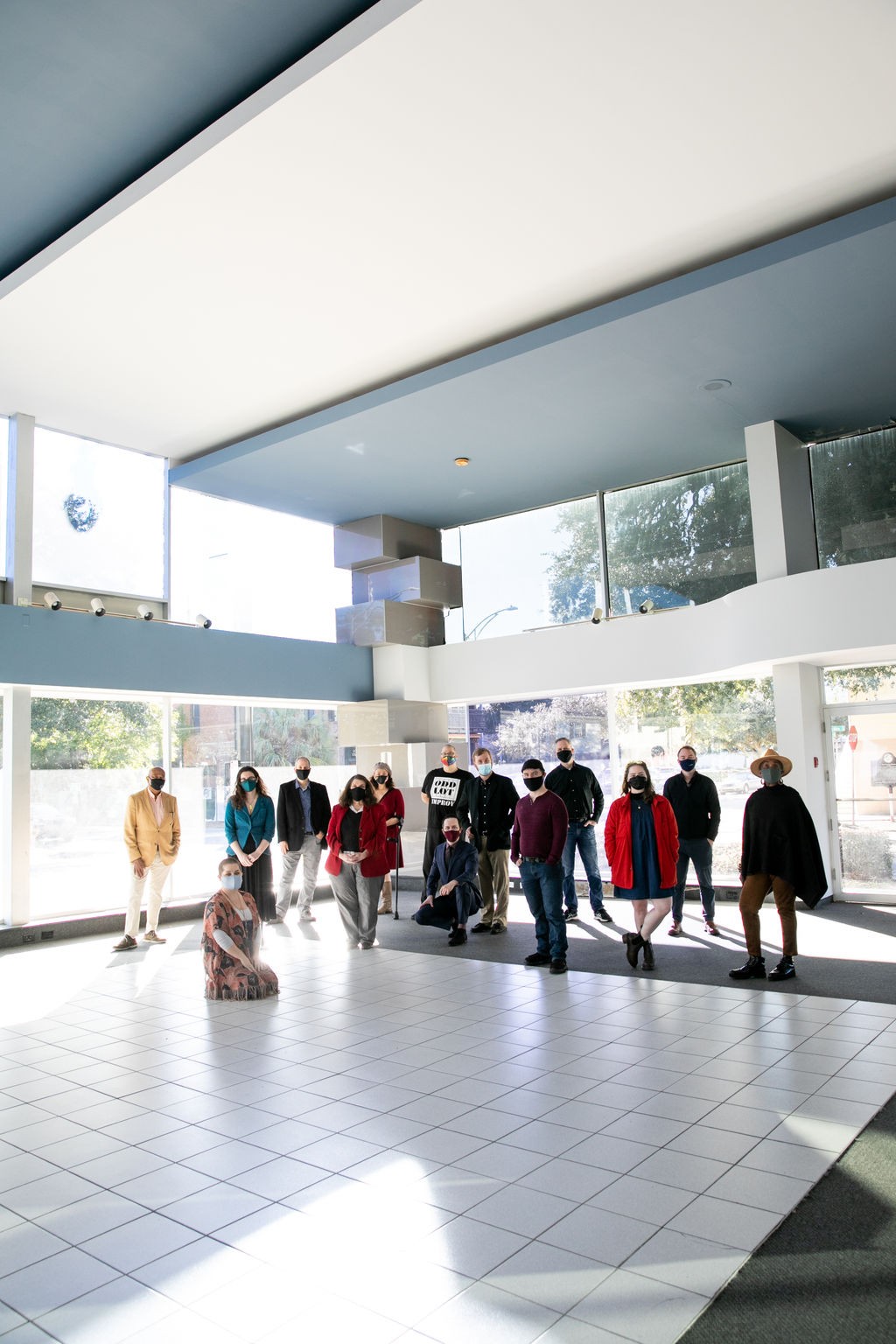 Photo by Megan Jones
Members of the Savannah Rep staff, board and community advisors gather in the lobby of the gifted building on Broughton St.
Local legends from various storied businesses in Savanah are working to bring the first nonprofit theater to Broughton St., with an aim of attracting theater fans to the Hostess City the way Broadway brings them to New York. The Savannah Repertory Theatre, “Savannah Rep,” announced their opening of a second venue in 402 E. Broughton, thanks to a generous boost from local well-known family, the Kaminskys – Ross, Myron and Adam – in the form of a building and operations in it at “terms that are just stunning,” said Ryan McCurdy, executive artistic director for Savannah Rep. “Having a nonprofit theater back is a pretty big deal,” said Adam Kaminsky, co-owner of Southern Motors Acura. The Savannah Rep board members include Stratton Leopold, owner of Leopold’s Ice Cream; Roger Moss, Savannah Exploratory Charter Academy founder and Dolette McDonald, singer and actor. “I honestly think this is the most dynamic nonprofit board I’ve seen assembled in Savannah for the arts – for theater, especially,” McCurdy said.

“Having a nonprofit theater back is a pretty big deal,” — Adam Kaminsky, co-owner of Southern Motors Acura.

The building used to house the Southern Motors Acura dealership, which is now located at 102 Park of Commerce Dr. The building on Broughton was used as a dealership for so many years, Kaminsky said, but it has been vacant for the last three years or so. “We were at some point going to redevelop the property, but for now it kind of worked out pretty well that they need a space,” Kaminsky said. McCurdy noted the incredible gift of the building, but that the building was not a theater, so they began the capital campaign. “The Kaminskys have come to the table,” McCurdy said. “Now, we need to raise the money to change the space. I believe it’s completely possible.” Savannah Rep’s shows will be based on rates that are nationally authorized, McCurdy explained, contrary to what is currently in Savannah: semiprofessional companies, companies that share ticket sales with their actors and some that share a small stipend. The difference, McCurdy said, is that the cast members are Savannah Rep employees while they are a part of the production, and Savannah Rep will provide them benefits like health insurance and pension while they are working. “It’s not that our shows are better or that our people are more talented, because in most cases it’s the same actors that are working across the city,” McCurdy said. “The only thing we want to try to provide is that when you are watching a Savannah Rep show and there is an actor on stage, they are not having to think about whether doing this show is keeping them from making money or doing something that can help them.” The Savannah Rep will hold an open house March 14 at three different time slots: 2 p.m., 4 p.m. and 6 p.m., to allow for smaller groups. Visit savannahrep.org/venues to make a reservation. McCurdy said the hope is that the event will grow local support for what they are building. “It’s for anyone that has an interest in either being a future patron, or a future participant or a future actor. We just want to get to meet people and as much of the staff and board as possible will be there floating in and out throughout the day.”