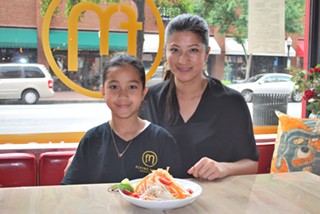 Ele Tran (right, with daughter Helena) keeps it all in the family at the new Flying Monk Noodle Bar on Broughton Street.

It wouldn’t be untoward to call Ele and Sean Tran Savannah’s First Family of Asian cuisine.

Their upscale Chive Sea Bar & Lounge has joined the ultra-chic Ele Fine Fusion in the top tier of award-winning fine restaurants around these parts, and the King & I and Tangerine continue to light up discerning palates on the Southside. Their highbrow homage to fast fare, Fire Street Food, has branched into Charleston, while the original location’s chicken skewers remains a staple for everyday appetites.

You’d think six restaurants spread across downtown, the Islands, past the last exit of the Truman Parkway and beyond would be enough to keep the Trans busy. But much like how some of us can’t stop noshing on Fire’s barbecue ribs, Ele and Sean can’t quit coming up with new culinary concepts.

Their latest venture is the Flying Monk Noodle Bar, right across Broughton Street from Chive. Inspired by the bustling Chinatown districts of New York City and San Francisco, the Flying Monk embodies the delicious smells and vibrant colors of those city streets. Chopping boards with crispy 5-spice pork are served alongside giant bowls of ramen topped with egg, accompanied by plates of edamame dumplings and spicy tuna tacos. All that’s missing are the ducks hanging in the window.

“Sean is obsessed with Chinatown,” admits Ele. “We took a trip to New York, and we went back to Chinatown twice, sometimes three times a day! We’d shop, we’d go get a hotpot. We’d see the Empire State Building, then go back for dim sum.”

At Flying Monk, Sean (known simply as “the Chef”) has combined his love for Chinatown’s hearty pedestrian noodle dishes with a talent for bringing together a variety of comfort foods from various regions across Asia. While the menu itself reflects the Trans’ predilection for culinary fusion, the recipes remain pure to their origins:

Crunchy Korean kimchi is offered next to chili-lime noodle salad from Cambodia. Pho (with all the fixins’, of course) from Ele’s parents’ native Vietnam shares the menu with Mekong ginger rice from Laos, from where Sean’s family hails. Sides include bok choy and Chinese broccoli as well homemade fry bread reminiscent of the snacks picked up in plain paper boxes from crowded food stalls.

And like the food in Chinatown, price points remain low: Most of the entrées don’t exceed $12.95, even at dinnertime. Open for lunch at 11 a.m., Flying Monk closes from 3 to 5 p.m. to prep for late night hours—10 p.m. during the week and 11 p.m. on Fridays and Saturdays.

“People come from all around the world to Savannah,” says Ele, relaxing for a moment in the simple red-and-beige banquette she designed. “They expect something different, something authentic.”

Ele is responsible for all of their restaurants’ remarkable and unique settings, and for Flying Monk employed a Chinatown theme without falling into kitsch (no dragon umbrellas or jade trinkets, no.) She transformed this former Mexican restaurant by brandishing splashes of red paint, live plants and a giant black Buddha presiding over the dining space. Glittering with sculptures of golden koi is a three-dimensional wallscape she collaborated on with local artist Adolfo Alvarez.

It’s a certain indefatigable passion that keeps Ele and her husband motivated to keep coming up with new hotspots of delicious design—and they aren’t done yet: Slated for this winter is the Vault, a gourmet café and market to be housed in the old Bank of America building in the Starland district.

Their continued momentum is also motivated by a dedication to taking care of their own.

“We have a big family,” laughs Ele, who first opened Little Saigon with her parents a decade ago. “We have to feed everybody!”

True, each restaurant is staffed with various aunties, uncles, cousins and various good friends who have become part of the Trans’ extended brood. Their 10 year-old daughter, Helena serves pok pok papaya salad at Flying Monk with a broad smile.

Their creative, fresh approach to culinary traditions matched with a commitment to family appears to be a winning recipe for Ele and her chef.

Of Flying Monk’s opening, Litts says with a grin, “We were literally slammed five minutes after we opened.” 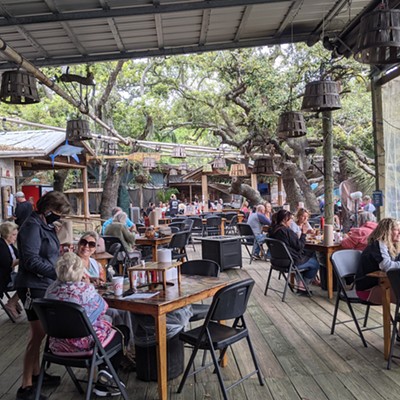