Nothing fuzzy about Fuzzy's vodka 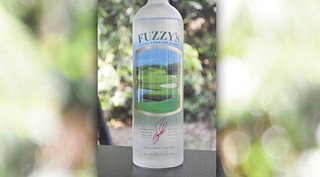 A taste of Fuzzy's

With spring comes the inevitable pollen crush - and a steady stream of new products. Here are a pair from the past week:

While the name of Tiger Woods may have been the most uttered phrase during The Masters, there's a good chance that the most frequent name called during the upcoming Liberty Mutual Legends of Golf will be that of Fuzzy Zoeller.

Veteran PGA professional Zoeller hasn't been involved in scandal; in fact, he's been working with distillers to perfect his own brand of vodka, aptly named after the golfer. It's a very crowded market category, with more and more players reaching out to capture the nearly 30 percent market share that vodka enjoys.

Zoeller's brand isn't just another mass-produced spirit bearing a celebrity name. Zoeller took an active role in its development and came away with a brilliantly clear vodka that filters ten times through charcoal and crushed volcanic rock. A portion of the batch is aged for up to two months in oak barrels.

The result is a smooth sipping, silky feeling vodka. My first impression was that of a very medicinal nose, but a sip revealed an immediately enjoyable vodka on the rocks. It's sure to be a great mixer.

In fact, I concocted my own drink with Fuzzy - a little something I like to call the Fuzzy Palmer: Two legends, one glass.
Start with a tall glass filled with cracked ice in which you mix an Arnold Palmer - half lemonade and half sweet tea. Add to that 1 ½ ounces of Fuzzy vodka. Stir and enjoy.

Of course, serious mixologists will want to blend the whole drink in a shaker, which I recommend, in order to mix all ingredients thoroughly - and to give the drink a solid chill.

The see-through front label is a window onto a golf course on the obverse of the back label. While it's not indicated on the bottle or in any of the press material, I suspect this is a scene from Covered Bridge Golf Club in Sellersburg, Ind., one of two courses in that area that Zoeller designed near his home town.

There will be three meet and greets with Zoeller on Wednesday, April 21, when the golfer will be signing autographs and promoting his vodka. The schedule is:

Oscar Wong and his fun-loving brew at this Asheville, N.C.-based craft brewer have rounded out their special seasonal brews with the release of Seven Sister Abbey Style Ale - watch for this to be on shelves by today - or by early next week.
Highland's brew geeks explain the beer this way:

At a moderate 6.5 percent ABV, this is an enjoyable, sipping beer that is elegant, mildly bitter and crisp without being overbearing.

Tim Rutherford grew up in rural Kentucky – then left home to pursue more than three decades as a photojournalist and newsman. A ground-breaking meal in New Orleans in 1979 set him on a path exploring food and wine. Six years ago he changed career paths – now spending his time writing about the people and places...
Read More about Tim Rutherford