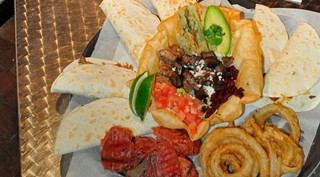 Chef Donnie Simmons is running on his seemingly limitless passion for food — and adrenaline. As if finalizing and testing a menu for soon–to–open Temperance and getting its kitchen in place isn’t enough pressure, Simmons has retooled the menu at sister eatery Taco Abajo.

From 6 a.m. Friday through closing bell on Sunday works out to about 300 tacos an hour, leaving gaps for closing hours mandated by City regulations for restaurants with bars.

“It’s fun, and a way to get some attention for what we’re doing here,” Simmons explained.

What he’s doing is a fading Hollywood starlet–sized facelift of Taco Abajo’s tacos and burritos.

The stress, and the excitement, are in Simmon’s blood. As a former caterer to the wildly diverse and often eccentric tastes of rock musicians, Simmons could be challenged by the Slow–vannah-ness of his most recent gig.

But he’s grooving to his own bass line. His thinly sliced deep–fried beets kissed with cumin dust are sure to be making a debut in this city — I’ve never found them on any local menu. His take on fried green beans brings crunch and flavor crashing together like cymbals.

Even as a devout carnivore, I found his vegetarian taco tightly orchestrated flavor, texture and fun into an appetite satisfying treat.

The Temperance menu should be a thing of marvel. Food is Simmons’ playground, aside from a stable of classic cars, and his ideas and executions run and romp through the kitchen like a kid at Disney World.

Powered by Simmons’ changes and an aggressive social media presence, Taco Abajo is getting buzz, and patrons, that it deserves. The restaurant’s Facebook page will countdown the taco sales during the St. Pat’s campaign. Prizes like T–shirts and brewery swag will go to every 500th taco buyer, and the 10,000th taco customer will get food certificates to the restaurants.

The expansion of the Taco Abajo space is nearly finished, but it remains unclear if final inspections will allow tearing down the wall and essentially tripling the tiny basement taco joint’s floor space.

When the wall does come down, diners will find a new U–shaped bar, draft beer and pool tables. The new space will provide a better venue for live music.

700 Drayton in The Mansion on Forsyth Park is hosting a dinner on March 21 that will showcase truffle dishes and a collection of Italian wines from the portfolio of Uva Imports. While most think of truffles as Franco fare, the Italians have integrated truffles into their dishes—which are designed to accompany their wines—for generations. Price is $75 per person. For a full menu or reservations, call 721–5002.