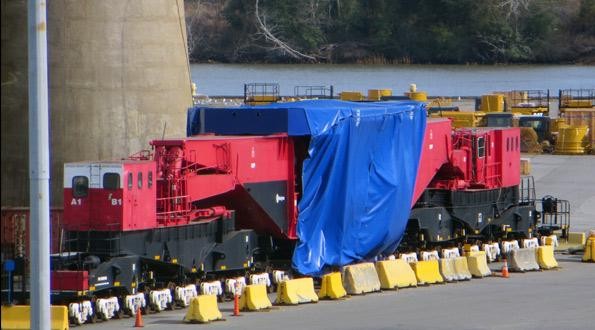 A COUPLE OF YEARS ago you purchased, among other things, a 300-ton reactor pressure vessel made in South Korea.

The vessel -- an enormous hunk of steel, heavier than the Statue of Liberty -- is intended to eventually contain one of the pair of new AP1000 nuclear reactors in the expansion of Georgia Power's Plant Vogtle between Augusta and Savannah.

I say you bought it because you did. In an unprecedented deal enabled by a compliant Public Service Commission and the Republican majority in the state legislature in 2010, Georgia Power was able to secure advance payment for the entire Vogtle expansion in the form of increased rates from its customers.

Despite whatever rhetoric you've heard about the American way, hardy capitalists bearing financial risk, etc., in this case Georgia Power, its lobbyists, and the politicians they influence essentially transferred all risk for the estimated $14 billion Vogtle expansion, present and future, to the public.

Connect Savannah reported on the development at length as it happened. Sorry to say, many of the things we and others warned about then seem to be coming true.

One of the main objections to the special Plant Vogtle financing deal was that it made no allowance to limit ratepayer exposure in the event of cost overruns or other unforeseen occurrences. Nor was there an allowance to refund ratepayers if the expansion didn't happen at all.

The deal already has serious ramifications. The entire expansion is now at least a year behind, at a potential cost of hundreds of millions of additional dollars, all of which are likely to be borne by you and me.

The consortium that built your reactor pressure vessel has filed a $900 million lawsuit -- that's nearly a billion dollars, folks! -- against Georgia Power and other Vogtle stakeholders. The suit seeks recovery of additional costs due to licensing delays, design changes and long delays with the pouring of concrete for the reactor foundations due to rebar problems.

(In a preview of how it might view possible future legal action by ratepayers, Georgia Power filed a countersuit saying it's not responsible for the added costs!)

Seriously. Fell off a train.

Shortly after leaving the port of Savannah on the way to Burke County, the vessel "became misaligned" with the specially built railroad car it was on, a design specifically intended to transport loads of this mass. (Luckily no one was injured.)

The train wreck is unusual enough. But it gets weirder: The media, and therefore the public, didn't find about the reactor vessel accident until Jan. 10, nearly a month later.

So where is your reactor vessel now? You should know, since you're paying for it.

A month after the train accident, the reactor vessel -- as the accompanying photo indicates -- apparently sits near the port of Savannah, the so-called misalignment having been rectified at least enough for the train to limp back to its starting point.

The photo, taken from public property by Tom Clements of the activist group Alliance for Nuclear Accountability, shows the reactor vessel under an enormous tarp (sort of), the Savannah River clearly visible.

Clements says the seemingly cavalier attitude towards the integrity of the reactor vessel merits increased scrutiny not only by Georgia Power ratepayers, but by the federal government.

"It appears that multiple violations of the Nuclear Regulatory Commission's regulations concerning components may have been committed and may be ongoing," says Clements, observing that the vessel seems to be partially open to the elements and not under serious guard against tampering.

So what happens next? We're not sure. So far Georgia Power's not talking specifics, thought it has said the accident will cause no delays to the expansion. To this customer that appears unlikely to be an accurate assessment, especially given the fact that Georgia Power is already being sued by contractors for delays and overruns.

In any case, while the reactor vessel has never contained radioactive material, the secretive way the train accident was addressed -- not to mention the fact that the accident happened at all -- isn't exactly a resounding confidence-builder about how actual radioactive material might be handled in the future.

But it's hard to conclude anything other than its customers seem to be paying for one of the most expensive train wrecks in the world, both literally and figuratively. cs