People who walk to the store pay so others can park 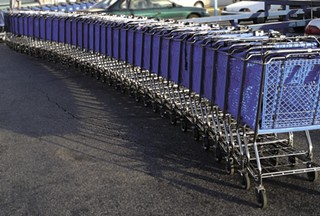 Savannah City Council's announced intention to hold retailers responsible for shopping carts that leave their properties in the hands of customers has drawn to the surface opinions about our duties as citizens and our responsibilities to one another.

As Jim Morekis astutely noted in his column last week, "America has a weird relationship with its citizens who are in poverty."

I would submit that we also have a weird relationship with citizens who don't have cars. These are often, but not always, the same citizens.

I can't imagine stealing a shopping cart. Even if I had a truck or SUV large enough to carry one, hefting a cart into such a vehicle would be no easy task. And what would I do with it once I got home?

Nope. Can't imagine ever doing such a thing. Similarly, many of us can't imagine walking to the store.

Yet for thousands of Savannahians, shopping and all other daily tasks are done on foot, bike or bus. Some 20 percent of Savannahians live in what the Census Bureau calls "Zero-Vehicle Households."

Overlay a map with census data and you'll see Savannah neighborhoods in which up to 50 percent of households don't have cars. This fact escapes lots of folks.

A tongue-in-cheek (at least I hope it was) letter to the editor of the daily newspaper suggested carts could be wired to deliver a mild electric shock if pushed outside the boundaries of a supermarket parking lot. Many other letter writers and commenters were not winking when they labeled people as "lazy," "sorry," "thieves" and worse for using a shopping cart to transport their purchases home and then neglecting to walk it all the way back to the store.

Don't get me wrong. I understand abandoned shopping carts are a form of blight. I agree that returning shopping carts to the store is the right thing to do.

However, I've observed that many of us can't be bothered to place carts in corrals only yards away, once we've loaded our groceries into our cars, much less take them back inside the store. Think about the number of times you've returned to your car to find a shopping cart resting against a bumper or body panel. Maybe the person who left the cart was in a rush to get to work, home to a sick child or to an important appointment.

Imagine the same scenario, but without a car to speed you to those destinations. What would you do? Can you be so sure you'd push the empty cart all the way back to the store, when time is short and the weather is hot?

When we drive most everywhere we go, we are insulated from the realities that face those who do not enjoy continuous access to a dependable automobile. Not only that, but we are often unaware of the accommodations made on our behalf.

For example, take the Gwinnett Street Kroger store, which is an unreturned cart hotspot. An entire city block is devoted to customer parking. Kroger shoppers are permitted to park their cars on this prime real estate, surely worth millions, for free.

Of course, there's really no such thing as free parking. The cost of parking lots and their ongoing maintenance is passed on to all customers, even those who don't own cars. I assure you these expenses surpass many times over the cost of replacing and retrieving wayward shopping carts.

As UCLA professor and noted parking expert Donald Shoup recently told the Freakonomics podcast, "If you don't pay for parking your car, somebody else has to pay for it. And that somebody is everybody. We pay for free parking in the prices of the goods we buy at places where the parking is free."

People who walk to the store pay so others can park. And when we criticize them for pushing carts home and thus choosing convenience over courtesy, we ignore the extensive and expensive efforts undertaken to ensure we, as motorists are not required to make such choices.

Vilification of "shopping cart scofflaws" also lends credence to the erroneous idea that making it easier and safer to walk, bicycle or ride the bus to the store represents some sort of subsidy or giveaway to people who don't deserve it. Nothing could be further from the truth.

In fact, providing these options is a sensible and responsible way to restore balance to a transportation system that, in its current state, rewards us if we drive and penalizes us if we don't.