It’s a story that has reached generations of people and continues a legacy unlike maybe any other in the history of literature and film.

Perhaps a great reason for that is because people are continually finding fresh ways to tell the story of Dorothy and reach a wide and diverse audience. Savannah Ballet Theatre is taking part in giving the story new life with their original adaptation, set for March 23 at the Lucas Theatre.

“One of the coolest things about this show is this - everyone has a story about the first time they saw Wizard of Oz,” Abby McCuen, the theatre’s Education and Advancement Director, who also created their adaptation, says.

“Whether you talk to somebody who’s in their 60s who used to watch it once a year on Thanksgiving, or my kids who are under 10, it doesn’t matter how old you are. It reaches all generations. It just touches your heart.”

McCuen says that she felt there was an opportunity to create a version that would tell the story in an interesting and creative way, so they set about to do just that in 2016 and decided to bring the production back this year.

“The ballet is an original adaptation, and it isn’t a very widely done ballet. I think that what makes it original is that obviously there’s no dialogue. Also, there’s music here that was chosen to move the story along. This is music that is from recent movies. We’re trying to bring in new audiences and make ballet more accessible,” she says.

In terms of the music, the process of finding the right songs and pieces to fit the feel of both the show as a whole and the dances was a very intuitive one.

“There is no music from the movie in this production,” she explains. “I pulled from a lot of composers. I feel like each scene has a feel to it, and the music sets the tone. I have to search for days sometimes to find the right track. I pulled a lot from James Newton Howard, who did The Village, and there’s a lot of work from Marc Shaiman who just recently did the Mary Poppins movie.”

Contrast was an important part of the structure of the show musically, with McCuen and Artistic Director Sue Braddy working to find the right music to represent both Dorothy’s life in Kansas and the magic of Emerald City. The farm scenes in particular feature the work of the late Aaron Copland, while the Emerald City scenes are set to more futuristic music.

Though it might seem that there would be challenges in terms of translating such a dialogue-driven story into something that was told through dance, McCuen says it was an extremely easy and creative process to make it happen.

“All of our original adaptations are in the same format, and this show was the easiest. I really didn’t have any hurdles,” she says. “I swear, it was like divine intervention. The heavens opened up. I think it was because I’ve seen this movie a million times, so I really had my finger on the pulse of it.” 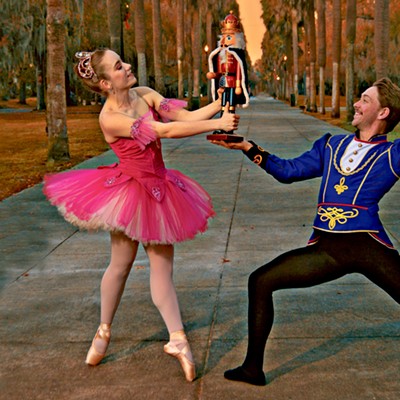