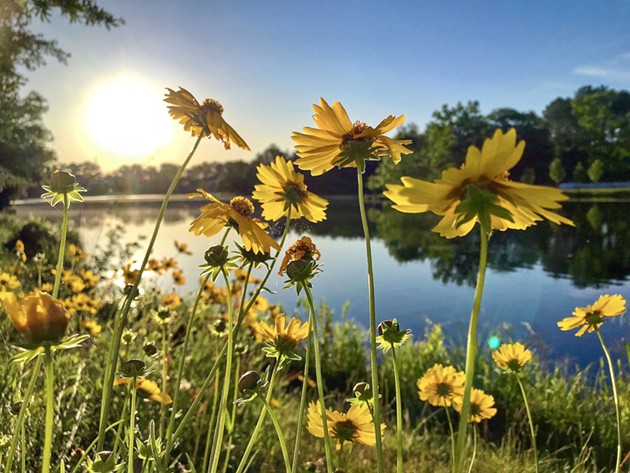 Julie McCracken
Julie McCracken's photo of lance-leaved coreopsis won the Plant Life category of the Ogeechee Riverkeeper photo contest.
With its magnificent array of natural habitats supporting a delicate ecosystem of plant and animal life, the 5,500-square-mile Ogeechee River watershed is one of Georgia’s most picture-perfect environmental treasures, illustrated by a freshly concluded photography contest held by a Savannah-based nonprofit organization. This was the inaugural photo competition of Ogeechee Riverkeeper, an environmental-advocacy group aiming to improve the watershed’s condition by raising awareness of threats to this diverse natural expanse, such as pollution and adverse impacts of area development. The watershed encompasses estuaries, tidal creeks, salt marshes, and other habitats lining Georgia’s 245-mile-long Ogeechee River, which concludes at the Atlantic Ocean along Chatham County’s southern border.
click to enlarge 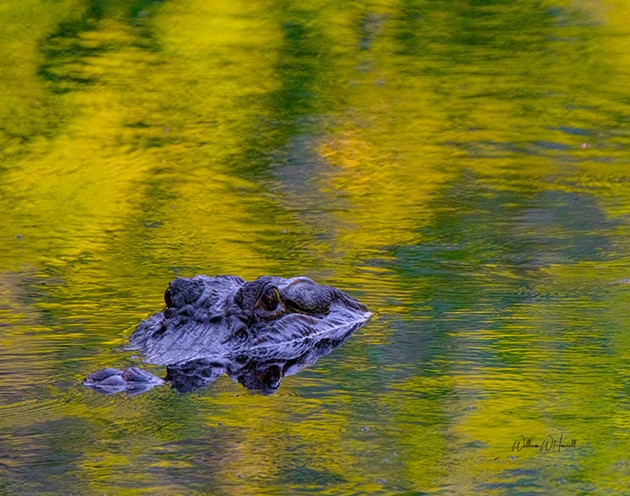 Billy Harrell
Billy Harrell's photo of a swimming alligator won the Wildlife category of the Ogeechee Riverkeeper photo contest.
The goal of the contest was to encourage the public to appreciate the Ogeechee’s diverse ecological features, which range from pine forests to coastal marshes and provide habitats for over 160 rare species of flora and fauna, according to Ogeechee Riverkeeper Communications Director Meaghan Walsh Gerard. “It’s really about showcasing the watershed,” Gerard said, adding that the photo contest provided a safe way to highlight the river’s natural beauty while group excursions are precluded by the ongoing COVID-19 pandemic. “We were looking for ways to engage people that didn’t require organizing events. … It’s something that people could do with their family or by themselves.”
click to enlarge 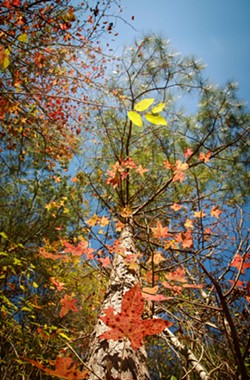 Janet S. Anderson
Janet S. Anderson's photo of leaves won honorable mention in the Ogeechee Riverkeeper photo contest.
Considering that many of the region’s amateur wildlife photographers visit the watershed’s parklands and historic canals for fresh-air getaways on a regular basis, the leadership of Ogeechee Riverkeeper was hopeful that their inaugural photo contest would elicit an enthusiastic response. The organization’s call for pictures shot in 2020 was declared in early December with a tight Dec. 20 deadline, yet enough submissions were received to award prizes in four categories, as announced on Dec. 28. In the Wildlife category, Billy Harrell took top honors for his image of a gator emerging from the Canoochee River glowing with the reflection of yellow flora; Harrell also won the Aerial photo category with a lofty sunset shot of the Canoochee-Ogeechee confluence. Julie McCracken won the Plant Life category with a shot of lance-leaved coreopsis flowers stretching heavenward to catch some rays. Meanwhile, Wesley Hendley earned the prize (and laughs) in the Funny Wildlife category with his picture of a pond slider turtle basking on a sunny log while a camouflaging layer of shaggy grasses blankets its shell.
click to enlarge 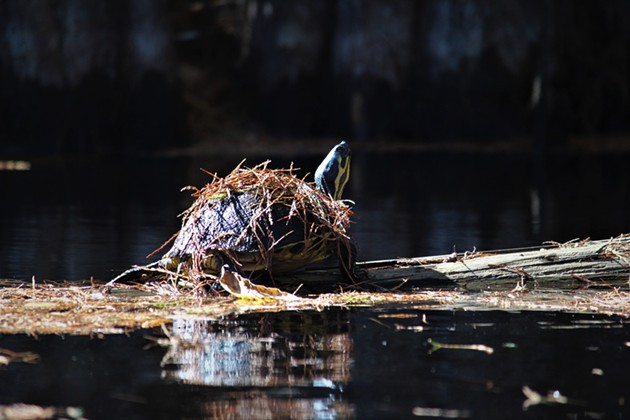 Wesley Hendley
Wesley Hendley's photo of a pond slider turtle won in the Funny Wildlife category in the Ogeechee Riverkeeper photo contest.
Hendley also scored an honorable mention for an autumnal shot of trees reflected in the waters at Twin City’s George L. Smith State Park, and Janet S. Anderson was similarly lauded for her intriguingly angled photo of intermingled leaves and tree trunks at Scarboro Landing. Beyond the honor of having their photos recognized and disseminated by Ogeechee Riverkeeper, the winners each received a yearlong membership with the organization, and each of them could pick a prize of a shirt emblazoned with a redbreast sunfish (native to the Ogeechee, naturally) or a rubberized canvas bag perfect for excursions into the watershed’s wilds.
click to enlarge Billy Harrell
Billy Harrell's photo of the Ogeechee-Canoochee confluence won the Aerial category of the Ogeechee Riverkeeper photo contest.
Ogeechee Riverkeeper’s leadership plans to continue the photo competition in 2021 for photos taken through December, and expects a bigger response next time with entries in other categories like portrait, underwater, and black-and-white photographs. According to Gerard, the photos are also helpful to area ecologists by providing up-to-date evidence of what species are flourishing throughout the watershed. “The more eyes and ears we have out there absolutely helps,” Gerard said. Visit ogeecheeriverkeeper.org to learn more about Ogeechee Riverkeeper and the 2021 photo contest.