Oi! It's Micky Fitz and the Business 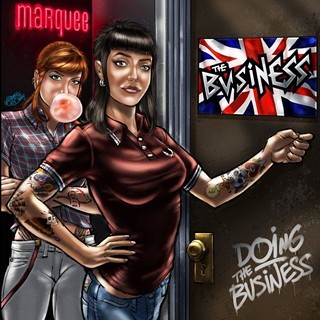 The cover of the most recent album by The Business.

When you think of British punk bands that were actually thrashing about all the way back in the mid to late 1970s, when the movement was sweeping the U.K., who comes to mind — Sex Pistols, Clash, Damned?

Allow me to give you The Business.

By 1980, British punk had splintered into loads of different directions — including what slack-brained labelists at the time took to calling "new wave," which really wasn't so new at all ... but I digress.

Working class kids who believed (quite correctly) that punk had been commercialized and (gasp) an accepted part of the bad old music business, kept it hard, fast and street-sloppy with a hardcore subgenre eventually dubbed Oi!

It's anthemic, soccer-match punk, and its association with angry violence (not to mention that many of the early Oi! fans were card-carrying skinheads who lived by the far right) led some in the tarty U.K. music press to tag it "punk's idiot half-brother."

Others just went with the slightly nicer-sounding "pub rock."

Michael "Micky Fitz" Fitzsimmons has been the lead singer of The Business since the band was formed in 1979.

Amazingly, this rough and ragged band is still in existence and still touring; Micky Fitz and (his new) company will perform at the Jinx Saturday, Nov. 30.

That's right, Oi! didn't die with the 4-Skins, Blitz or the Angelic Upstarts.

The best-known Business songs are doubtless "Drinking and Driving," "Smash the Discos" and (try to figure out what this one's about) "England 5 — Germany 1."

A few months ago, an interviewer in Hawaii asked Fitzsimmons if the working class issues, as he saw them, were the same after three decades and change.

"Some of them are the same," replied the frontman. "People out of work...is an old problem, but it's relevant now. Computers have put people out of work. There's so much work that can be done on the computer now that used to take 10 people now.

"I'm actually a technophile, I love technology, have to have the next new phone. I love cinema and TiVo, but I am not a social networker because I think it's taken away personal touches, and privacy. I'd rather use the telephone."

Opening the show will be the Orlando-based hardcore foursome the Attack, with "classic, face-smashing, broken bottle punk."

• On Dec. 14, the Train Wrecks and the Accomplices will be back at the American Legion Hall on Bull Street for yet another Homegrown Holiday Hoedown. These for-charity shows are always great fun. Keep it here and we'll fill in the blanks as info becomes available. This one will also have the New Familiars and American Hologram.

Hey, holiday-heads: Jinx shows on the horizon include American Aquarium with the Savannah Sweet Tease (Dec. 14), Lullwater and American Mannequins (Dec. 21), and the long-awaited return of Lucero (Jan. 27, with Johnny Fritz).