It felt like she took the Savannah she made with her. 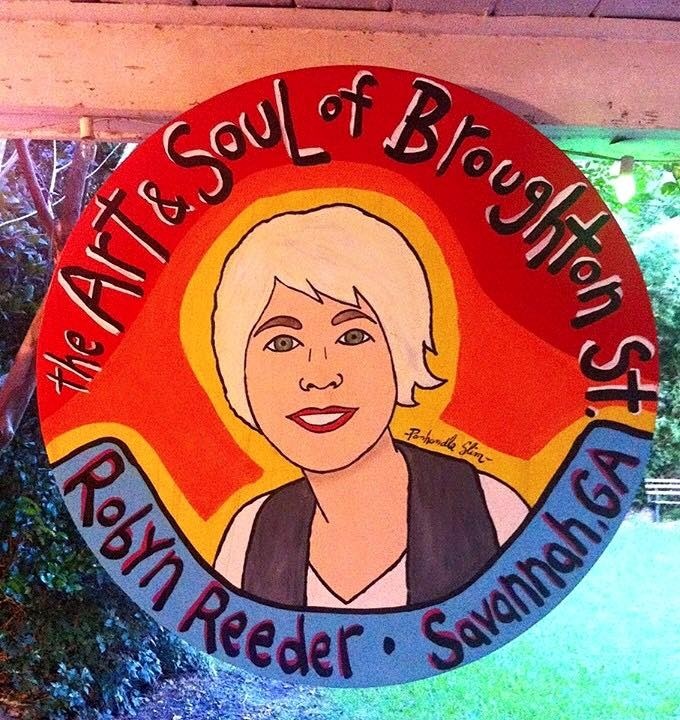 A tribute to Robyn Reeder by longtime friend and collaborator Panhandle Slim.

A FEW days ago, I felt something I haven’t felt in a long, long time: the desire to get the hell out of Savannah for good.

When I heard that Robyn Reeder—the Art & Soul of Broughton Street, my hero, friend, occasional boss, fellow musician, and unofficial mentor in being a cheerleader for Savannah—had passed after her long struggle with cancer, all I wanted to do was leave.

Within the same hour of receiving the news that the woman who dared to open a business on the Broughton Street of the ‘90s—the Wild West, with literal tumbleweeds rolling down the street and vacancies aplenty—it was announced that several new chain stores, including Michael Kors and Tommy Bahama, would be opening on Broughton.

Once the tears came, I couldn’t stop. I sobbed for such an immense loss, for the innumerable people whose lives Robyn directly or indirectly changed, for her incredible husband, Igor, sister, Jenny, her family and chosen family.

I cried for Savannah, for this bullet-ridden, blood-soaked town, for the dozens of creative and influential people who have moved away recently out of frustration, exhaustion, or lack of opportunities.

Robyn made Broughton Street. She threw open the doors of Primary Art Supply to host punk bands, held renegade fashion shows, and, as her husband Igor so wonderfully phrased in a devastating and beautiful blog post, “styled the entire city” in vintage and recycled clothing through her shop, Civvies.

When Robyn moved to Savannah to attend SCAD, fashion choices were limited to the department stores and chain shops at the Oglethorpe Mall. Thanks to her, Savannah’s closet flourished; students and locals alike grew colorful, completely one-of-a-kind wardrobes.

Robyn knew that a beautiful pair of vintage boots can change the way a person carries themselves; when she gave me the perfect black leather motorcycle jacket, she did so knowing that clothing can act as armor, as a weapon.

In her health, in her life, in her work, Robyn was a fighter, tenacious with passion that shifted the air around her and inspired and pushed others to strive for excellence in themselves and their community.

You’ve never seen determination and strength until you’ve seen a woman with Stage Four cancer working two jobs, planning parties, being a devoted friend, partner, and businesswoman, all while expressing gratitude, so much gratitude, and doing it all with such bravery and grace, despite the insurmountable pain.

With her passing and the announcement of the further Ben Carterization of downtown, it felt like Robyn had taken the Savannah she made with her.

The opening of a Michael Kors and Tommy Bahama is the textbook definition of homogenization, so much so that it’s almost parodic. You can’t get more white-bread, more banal, more on the entire opposite of Robyn’s spectrum.

It felt so cruelly symbolic.

A few days later, election results came in, stacked with incumbents, bringing that old nickname “Slowvannah” to mind (so many utter it while they’re packing their things).

I got caught in or witnessed three police chases in one week.

Several close friends were robbed at gunpoint in separate instances over a 72-hour period.

On Tuesday, I was in a packed room of friends and musicians, all out on a weekday to support one another at an open mic. They sang along to one another’s songs, jumped onstage to add harmonies, shared praise and encouragement.

In the middle of a set, I got word that Pinkie Masters was closing its doors after 65 years.

In a town without that weird, historic dive that generations have filled, where Hang Fire isn’t right there on Whitaker Street because someone moved above an existing club, complained about the noise and won, where it’s becoming damn near impossible to find affordable living downtown, where Robyn Reeder isn’t standing in front of the Civvies picture window, scheming up the perfect holiday display, or steadily hitting the drums, draped in her Silver Machine robes and surrounded by a circle of loving friends, what do we have left?

Where is the soul that gives Savannah that fierce spark and elusive allure that other cities only dream of?

Robyn died on the same day that Lou Reed passed two years ago. That morning, in what’s become an October 27 ritual in memory of one of rock’s greats for me, I lay on my bed and let The Velvet Underground’s “Rock & Roll” wash over me.

Despite all the amputations, you could just dance to that rock & roll station, and it was all right.

Through the week, I found myself clutching those words like a mantra.

I was watching Bear Fight at The Jinx on Thursday—their new atmospheric-yet-heavy-as-lead, transcendental sound as three-piece packs a healing power that feels something like getting a B-12 shot after several hours of meditation—when I remembered something Robyn said to me in our July interview:

“I want people to have my passion when I can’t work anymore. You can’t control what happens after you die. You can’t say, ‘You! You’re gonna be me! And this is what you’re gonna do!’ ‘Cause that’s kind of what I want; what I wish I could do. But I can’t. So I have to set it up the best I can.”

We can’t give up on this city. I refuse to.

We owe it to Savannah, to Robyn and people like her who worked tirelessly to make this an enriching place: one that’s culturally stimulating, healthy for artists, safe and diverse, and an oasis of originality in a strip mall, urban sprawl world.

There will be a memorial for Robyn at the American Legion Ballroom on November 12 with music and remembrance.

I know for me, it will be an example of our community’s incredible outpouring of love and support, a time to remember a visionary Savannahian, and a testament to the integrity and innovation we are responsible for upholding.

It’ll be a reminder that, even on the heaviest of days, if we can tune into our neighbors, if we hold fast to that which moves us to be our best selves—as creators, as citizens, as one unstoppable, impassioned force—than we can all believe it: it’s all right.