On the path to totality

WHEN my kids first began noodging me about The Great American Solar Eclipse of 2017 a year ago, I was nonplussed.

“Pish, what do teenagers know about ‘once in a lifetime experiences’?” I snorted, seeing no reason to waste time and gas schlepping up I-95 to watch a shadow creep across the sky. “Finish that stale box of cereal and make a viewfinder and watch it from the backyard like we did in the 70s.”

“But but but we have to be in the path of totality,” they explained, shoving their phones in my face to show me the swath of colored coordinates on a map. “It’s kind of being a little bit pregnant. Either you are or you aren’t.”

“I have no idea what I’m looking at but neither of you better be pregnant!” I yelled. 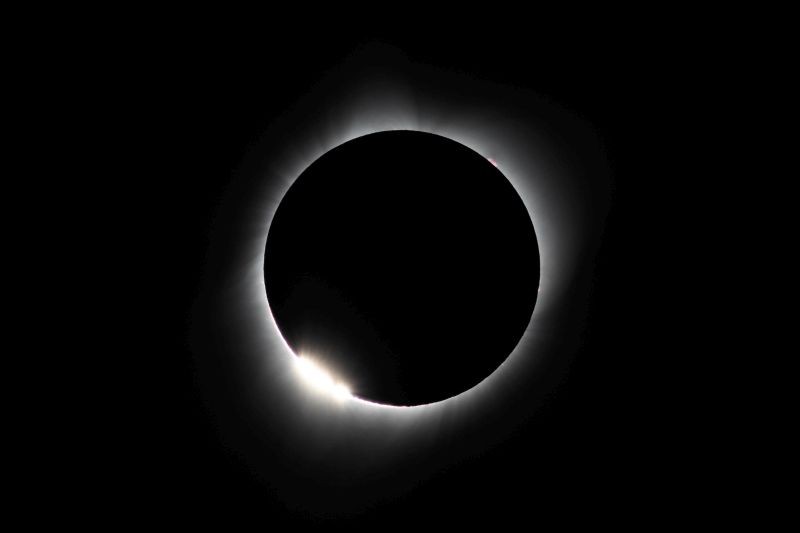 For months, I rolled my eyes over their admonitions that we’d better book hotel rooms in several cities just in case it was cloudy and suggestions that “Missouri isn’t that far of a drive.”

Then the internet started freaking out and school got canceled for this “inclement weather event” and I was spurred to purchase a 10-pack of paper eclipse glasses on Amazon Prime before the price ballooned to match a mortgage payment.

I also realized if I got to work at dawn that morning, I could churn out most of my deadline duties and be in South Carolina in time for the dark side of the moon’s full Monty that afternoon.

Our dinner table the night before looked like one of Daenerys Targaryen’s military strategy meetings, all heads bowed over weather radar apps and snack provisions.

“I have a very important question,” announced my husband as he divided almonds and craisins into Ziploc bags.

“If you show your moon to the sun during an eclipse, do you get a ring around Uranus?”

Even though this joker wasn’t taking this celestial occurrence as seriously as the rest of us, we still let him arrange the playlist, which included Manfred Mann’s “Blinded by the Light,” Soundgarden’s “Black Hole Sun,” The Grateful Dead’s “Dark Star” and obvi, The Police’s “Invisible Sun” and “King of Pain.”

“There’s a little black spot on the sun today...” we sang as we crossed into Cackalacky on I-17, saluting the suckers already bumperstuck on I-95. We picked up a virtually-empty 321, coincidentally the exact route we followed when we evacuated for the last inclement weather event of Hurricane Matthew.

Fellow eclipse chasers Clinton Edminster and Heather MacRae closed Starlandia for the day to join our caravan, remaining remarkably patient when Siri made us do pretzel turns outside of Fairfax. We were aiming for Aiken, but the loudmouth experts in the car deemed it not far enough in the zone.

“That’s enough! We get it! The next person who mentions pregnancy gets the bent pair of glasses,” I shouted over Bonnie Tyler’s “Total Eclipse of the Heart.”

We followed a clear patch in the cloud cover to the tiny town of Springfield, SC. With a population of 497, Springfield is best known for its flea market and annual frog jumping contest, but on this day its central park drew what must have seemed like a massive crowd of about a dozen eclipse watchers.

Unbelievably, the majority were Savannahians: Our party of seven met Pastor Jerry Garrison of Skidaway Island Presbyterian Church and his wife, Donna, in the park’s wooden pavilion, where we swatted gnats and awaited the wonder.

While we all anticipated some sort of spiritual experience, Rev. Garrison assured us that in spite of the warnings from SC emergency officials about a possible invasion by lizard people and other paranormal cataclysms, the eclipse was probably not a harbinger of the Apocalypse.

“If it is, I don’t think these three dollar glasses are going to do us much good,” laughed Rev. Garrison of what a certain paranoiac spouse deemed the “Apoca-clipse.”

Through our blacked-out shades, we observed the moon make its way across the white hot disc of the center of our solar system, carving out another sliver of darkness every few minutes.

The leaves on the oak trees began to spray crescent shadows across the pavement as the light got lower. At around 2:20pm, the confused crickets began to chirp.

The sickle shape of the sun got smaller and smaller until finally, at exactly 2:42pm, the moon’s umbra muscled its way between the earth and its supreme source of light.

The sky went completely dark, save Venus twinkling in the southeast and the sun’s corona bursting with ethereal greens and pinks and golds.

For a full minute and 40 seconds, our planet was in full alignment with its heavenly bodies, and my monkey mind ceased to spin.

We took off the paper glasses and danced and hugged and laughed and cried because it suddenly became so obvious that each of us is standing on the same stage spiraling through space, and for one wonderful moment there was an unshakeable sense that “all that is gone and all that’s to come and everything under the sun is in tune”—to borrow a phrase from Pink Floyd’s “Eclipse.”

It was, as my wise children promised, the most magnificent natural event I have ever witnessed, outside of their births.

The thing about the universe, though, is that it’s in constant motion, and epiphanies never last. The moon slid past on its waxing way, and the sun shone on the same messy, flawed world that it did before, us inhabitants once again mostly oblivious to the astral machinations above.

(On a related note, Mercury doesn’t care that you don’t care that it’s in retrograde, it’s still gonna mess with us.)

But the image of that mighty fiery ring remains burned into our brains, and from now on my family and I shall count ourselves as umbraphiles for life, plotting at the kitchen table to see how long it will take to drive to Argentina in 2019 and whether Antarctica will have any cheap hotel rooms left in 2021.

We’ve already put a road trip to Florida in the calendar for August 2045, and if we can keep ourselves alive until March 2052, we can enjoy the view from our backyard. (According to the mortgage calculator, we’ll even have the house paid off by then.)

Now, I know that a shroud of gray deprived those who stayed in Savannah for the eclipse of any view of it at all, and I’m so very sorry.

But take heart that you didn’t miss out on much, because even at 97 percent coverage, it wouldn’t have had the same majesty as full totality, anyway.

See, it’s kind of like how you can’t be a little bit preg—oh, for heaven’s sake, nevermind.

We are the help we're looking for