Contending with challenges to our local ecology 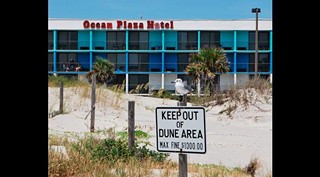 The past few weeks have brought several developments that affect Chatham area rivers and beaches. From the ongoing debate over harbor deepening, to some long–due action on the toxic dumping in the Ogeechee River, to the illegal removal of a sand dune from Tybee Island, our waterways are making news.

Is the glass half full or half empty, or is it something in between? Here are the facts; decide for yourself.

Water in the court

Fed up with the feeble attempts of the Georgia Department of Environmental Protection to keep King America Finishing from dumping toxic fire retardant runoff into the Ogeechee River, environmental advocates have filed a civil suit with the U.S. District Court against the textile plant.

The Ogeechee Riverkeeper asserts that pollution discharged from KAF violates the federal Clean Water Act and is responsible for several fishkills, including the largest in state history that left almost 40,000 dead fish floating downstream from the pipe in May 2011. The ensuing EPD investigation couldn’t definitively prove KAF killed the fish, though it lobbed a $1 million fine at the facility for dumping without an appropriate permit — a paltry fee considering the extent of the damage, say those who live along the river.

Now the Ogeechee Riverkeeper has taken the law into its own hands with the suit, which also contains violations against the Georgia Water Quality Control Act.

“If the EPD had been doing its job in the first place, King America Finishing would have been caught dumping its unpermitted discharge, and none of this expensive and time–consuming litigation would have been necessary,” says Ogeechee Riverkeeper Board Chair Ann Hartzell. “ORK is in this fight for the long haul, and suing the factory in the federal court was the logical next step.”

Similar suits have been filed in Fulton County and Bulloch County, where last week a judge upended the EPD consent order that limited the fine to $1 million. KAF continues business as usual in spite of its lack of permit.

A Tybee Island hotel proprietor has been cited for altering a sand dune  last March after a long investigation by the Department of Natural  Resources.

In  a three–page letter to the DNR, Ocean Plaza CEO Harry Spirides  explained that the reason he paid laborers $20 an hour to shovel sand in  the middle of the night for three weeks was to clear the walkway in  front of his hotel.

“It was not my intention to destroy the dune or harm the environment,” wrote Spirides. “I recognize that I used poor judgment.”

He did not, however, address why it took four months to confess to the crime.

“Everybody  on Tybee knew DNR was looking for who did it,” says Tybee Councilmember  Paul Wolff. “Most people aren’t buying his story.”

Spirides  is on record at an April 2011 city council meeting asking if the dune  could be moved. As a member of the island’s Beach Task Force, it seems  unlikely that Spirides could have been unaware of the four–month long  investigation of the missing dune.

Sand  dunes protect residents from storm surges as well as provide a habitat and shelter for dozens of wildlife species, including crabs, birds and nesting sea turtles. (See Bill DeYoung’s story on Tybee’s  record–breaking sea turtle nesting season.) According to city code, one of the purposes of the Tybee Island Beach Task Force is to  “promote the beach preservation and renourishment.”

The  dunes and sea oats are protected under Georgia’s Shore Protection Act  as well as under Tybee law, and altering them can bring a fine of up to a  $1,000. Spirides was fined $100 by DNR and remanded to repair the dune,  but he could owe up to $1 million in civil fees.

Adds  Wolff: “Flagrant and willful destruction of an established dune and its  natural vegetation violates both state and local laws, and should  trigger immediate dismissal from the task force.”

Hurry up and wait?

The White House announced last week that President Obama has expedited the advancement of seven infrastructure improvements, including the Savannah Harbor Expansion Project (SHEP), by making the federal review process “more efficient and effective.” The missive, part of the federal “We Can’t Wait” initiative, promised that all reviews of the Port of Savannah would be completed by this November.

But several pending lawsuits could delay the proposed 38–mile dredging on the grounds that the U.S. Army Corps of Engineers doesn’t have the necessary environmental permits to move ahead with the $650 million project.

The first suit, filed last November in a South Carolina administrative court by the Southern Environmental Law Center, challenges the validity of a water quality certification issued by the S.C. Dept. of Health and Environmental Control.

DHEC had originally vetoed the permit based on environmental and public health risks associated with the proposed dumping of cadmium–laced waste on the S.C. side of the river; the agency flip–flopped after a closed–door meeting with Georgia governor Nathan Deal and Georgia Port Authority officials. S.C. representatives passed a unanimous resolution to overturn DHEC’s approval earlier this year. SELC is joined in the ongoing court appeal by several groups, including the Savannah River Maritime Commission.

Also on the docket is a second petition presented to the state Supreme Court, asking the judge to weigh in on a “narrow subset of issues” based on the administrative court case.  It posits that DHEC overstepped its authority by issuing the certification in the first place, thereby invalidating the permit. The court could issue a decision on that petition any day.

As a result of challenging the certification and approvals issued by DHEC in the administrative court, an automatic stay provision has been placed on the project.

“The project can’t move forward until this case is resolved or the automatic stay is lifted,” says Chris DeScherer, an attorney with the SELC. “A favorable decision in the administrative law court or by the South Carolina Supreme Court could halt the dredging.”

The corps has threatened to invoke exemptions under the Clean Water Act that could get SHEP around the S.C. hurdles. One exemption propounds that states can’t interfere with the corps’ authority over maintaining navigation, in this case deepening the river to accommodate bigger ships. The SELC is prepared to present this as a specious interpretation.

“We would argue that this is not maintenance, this is an expansion,” contends DeScherer. “The corps’ interpretation could allow the federal government to erroneously ignore legitimate state concerns regarding deepening projects.”

A decision by a federal court of appeals in Philadelphia in July upheld a similar exemption for the corps in the Delaware deepening project, but DeScherer remains optimistic. “We don’t think that decision applies here.”

The SELC has also filed a third case involving the South Carolina Pollution Control Act, which requires a permit for the discharge of pollution anywhere in the environment. According to SHEP’s Environmental Impact Statement, the corps has no plans to obtain such a permit. SELC petitioned a state court in Jasper County asking for a declaration on whether a permit is necessary. The corps, a federal agency, had the case moved from state court to a federal district court, which is poised to rule on the petition this fall.

The corps has stated that SHEP will not increase the total volume of goods coming in and out of Savannah nor does it promise any permanent jobs (in fact, DeScherer points out that less ships coming in out might even mean fewer jobs.)

While the corps heralds transportation efficiencies that are supposed to create cost savings that will trickle down to American consumers, SELC maintains that SHEP’s environmental risks—which include the permanent salination of Savannah’s drinking water—continue to far outweigh the benefits.

Though President Obama’s edict presents a position of supporting economic growth in an election year, it won’t speed anything up as the corps already posted its plans to release its Record of Decision by November anyway.

All three SELC cases remain in S.C. courts. No lawsuits against the Savannah River harbor deepening have been filed in the state of Georgia.

Apathy about environmental issues runs high, but many local folks are waking up to the critical the challenges to our water supply.

Over 120 people packed the house for one–night screening of the documentary Last Call at the Oasis at Carmike Wynnsong 11 Theaters last week, a testament to the growing concern among Savannahians about water. Sponsored by Well FED magazine and benefitting the Savannah Urban Garden Alliance, the event sold out its original venue and had to be moved to a larger theater to accommodate the crowd.

Splicing interviews with activist Erin Brockovich, author Alex Prud’homme, renowned scientist Tyrone Hayes and intel from NASA experts, Last Call paints a frightening picture detailing corporate pollution and massive exploitation of America’s water systems. The good news is that there are answers in recycled sewage, giving up our St. Augustine lawns and voting for political candidates who will enforce a stronger Clean Water Act. But the time for action was yesterday.

“What we’re hearing about locally is happening all over the country,” said moviegoer Jamie Marie Smith, who is on the board of the Ogeechee Riverkeeper and supports numerous environmental organizations.

“So much discovered and revealed in this film. The people here tonight have to be the ones to spread the word.”