One day at a time

Stricken by a stroke in 2010, Lori Stuart is working towards recovery 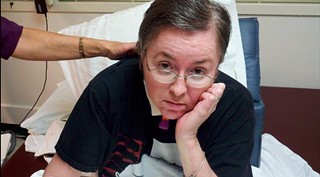 With a little help, Lori is now able to sit up. "You want to pave the road," says Rob, "first you have to clear the trees." (Photo: Rob Stuart)

Thirteen months have gone by since Lori Stuart, lead singer for the Savannah classic rock band Rhythm Riot, suffered a massive stroke on the stage of Bay Street Blues. In the tense, touch–and–go days that followed, she could only move her eyes, and doctors diagnosed Locked–in Syndrome – what the French call “walled–in alive disease.” The prognosis was, at best, grim.

“Everybody had written her off for dead,” says Rob Stuart, Lori’s husband.

That’s because she’s defying the odds.

She can operate a custom–built wheelchair by moving her head from side to side. Twice a week, she stands on her own in a special frame. And with the help of a “zero gravity” device, Lori is able to raise her left arm and feed herself.

“If anything,” says Rob, “I’ve learned don’t try to go long–term, just take it one day at a time.”

Lori, 46, is clear–eyed and talkative (well, she still has a small tube in her throat, so she moves her mouth without making actual sounds; that is expected to change) and she delights in surprising her husband, who’s there every single day, with her gradual progress.

For the Stuarts, every healthy day, every sign of improvement, is a little miracle. But so much of the work is Lori’s to do.

“Here’s a way I use to explain to folks how it works,” Rob explains. “You’re in a dense rainforest and you want to pave the road. First thing you have to do is clear the trees. So that’s what’s basically happening with her: Clearing the trees is, the brain interprets a signal and learns how to deal with it in a new area of the brain.

“OK, the trees are clear, but now you gotta clear the stumps. Then you pave the road in your forest: Once the muscles remember, then it’s just a matter of training them to get stronger.”

Lori loves to have visitors drop by to say hello.

“Right now, I think our only long–range goal is to get her home, hopefully by Christmas,” he says. “We understand that if we make it, that’s fantastic – if we don’t, we’re not going to be too terribly disappointed.

“Other than that, it’s still one day at a time. She does little baby steps. She’ll fall back a little bit, but she’ll pick herself up, dust herself off and get right back at it.”

Last July, the city–wide benefit “Livin’ it Up For Lori” raised thousands of dollars for her health care. That money, plus Medicaid support and other donations, pays (most of) the bills.

UHS–Pruitt Health Care, which owns the Heritage facility, is providing her rehab sessions free of charge. According to Rob, they’re using Lori as a case study.

“They see potential, and that seems to be what they’re all about,” he says. “I’ve seen some stroke patients in there who have not been able to move at all, and I’ve seen them walk out already.

“Granted, they weren’t as severe or as devastating as Lori. But to me, any time you have a stroke and you can’t move at all, that’s pretty devastating.

“But they’re fantastic. They threw away their book. When they find something new that works, they go with it.”

Meanwhile, life goes on. In March, Lori became a grandmother for the second time. Rhythm Riot, such as it is, still performs (Lori’s good buddy, singer/guitarist Bill Hodgson, visits her at Heritage often). And Rob still runs his computer security business.

“I have my ups and downs,” he confesses. “It’s tough on me in a whole different way. Trying to run my business, trying to pay the bills, trying to help take care of her ...

“I take my vows very seriously. This is the first time I’ve ever been married, and I’m not going anywhere. I love her.

“And I told her, the vows were for better or for worse – and you can’t get much worse. Richer or poorer – we can’t get much poorer. In sickness and in health – I think we’ve hit rock bottom on the health issue.

“But I consider it, for the most part, smooth sailing from here.”

• A message from Lori re: last summer’s city-wide Livin’ it Up benefit: We would like to thank the venues and their staff who hosted the benefit, and the bands who played and gave to the cause. Super Dave, Wendi and Amy for organizing the whole event. Most of all I want to thank the fans who bought Lori Bucks, t-shirts and participated in the auctions. I also have to thank the print, radio and news media for covering this special event. I love you Savannah!!