One full year of Missionary Blues 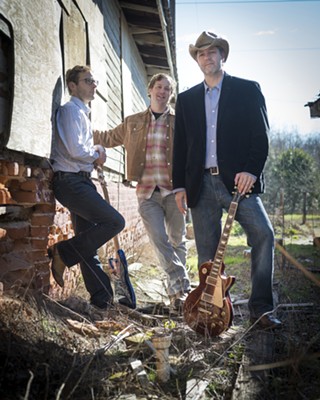 Once a musician, always a musician. It's kind of like the Mafia—you signed up for life, my friend. You can check out any time you like, but you can never leave.

“I’d pretty much stopped playing electric for a number of years, and was just doing the occasional acoustic gig,” he says. “But at a jam session last year, I met some folks and I remembered how much I enjoyed plugging in my Les Paul and making real noise.”

In particular, he hit it off with bassist Rigel Crockett, who shared English’s love of gutbucket blues. One Sunday afternoon, with drummer Micah Goodwin, they knocked out a few 12-bar tunes to see what they sounded like together. “It gave us an excuse to drink a few beers and jam a little bit, with no aspirations,” English laughs.

The chemistry was strong. English and his friends were indeed making serious blue noise. “So a year later, we’re gigging every other weekend, we played Savannah Stopover and we’ve done a lot of neat things,” he marvels. “It came together pretty nice. We’re really in synch.”

The band is called Missionary Blues. More often than not, the trio is joined by Rae Abney, an inspired blues harmonica player originally from the Macon area. Onstage, the fedora-sporting “Sista Rae” is inhabited by the ghost of Paul Butterfield —pretty amazing when you consider she’s a grandmother. She do got the fever, however.

Missionary Blues celebrates its first anniversary with a free show Saturday, June 28 at Bub-Ba-Q, from 6 to 10 p.m. It was English’s idea to make it a joint event with Roots Up, the Liberty Street folk art gallery.

He and Roots Up co-owner Francis Allen are deeply involved with, and committed to, the Ogeechee Riverkeeper organization, and they share a profound love of music.

The gallery will display works by Tex Crawford, Linette Dubois, Leonard Jones, Georgia Kyle Shiver, Panhandle Slim and Miz Thang, and several of the artists themselves will be in attendance.

“I love folk art,” English says. “I’ve always said, Southern folk art and the blues all drink from the same well dipper. They’re typically self-taught art forms that are usually on the outside of the mainstream. It usually comes from a rural area.

“Southern folk art and the blues go hand in hand. So I thought it would be fun to have Roots Up come out, bring some artists, put some artwork up, and we’ll turn Bub-Ba-Q into an old school Southern juke joint.”

Art Rise Savannah is sponsoring a children’s art area starting at 6 p.m.; the band begins to wail at 6:30.

It’s good old hardscrabble electric Southern blues, y’all. No more and no less that. “This is the first band I’ve been in that has been purely dedicated to the blues,” English says. “It’s the first band I’ve played in that I can play a three-hour set of music and not play one song that I’m not 100 percent committed to.”

Oh, one more thing. How’s this for irony?

“We actually played our first gig there, between when it was Blowin’ Smoke and Bub-Ba-Q,” English explains. “When it was called the Brick House for a short time. That stage is where Missionary Blues played its first gig. It’s our first anniversary, on that same stage.”