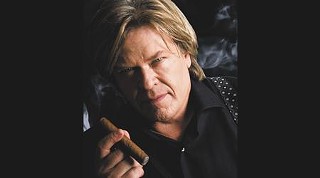 On Sept. 10, 2008, Ron White was arrested on arrival at the municipal airport in Vero Beach, Fla., after a phone-in tipster told the local sheriff there were drugs on the comedian’s private aircraft.

It wasn’t on the plane, in fact – it was in White’s pocket. After he voluntarily handed over his seven-eighths of one gram of marijuana, they searched the plane (with a drug-sniffing dog) anyway, and came up with nada.

White’s version of his subsequent arrest, booking and release became a part of his show that very night, and it remains to this day: These cops drove by three meth labs and a dead fuckin’ hooker to get to my seven-eights of a gram of marijuana.

Hear all about it when Ron White performs at the Johnny Mercer Theatre Saturday, Aug. 22.

One of the best slow-burning, sarcastic comics in America, the Texas-born White – who keeps a lighted cigar and a glass of scotch onstage at all times – has little patience for the slow-witted, the ham-handed or those who have trouble grasping the obvious.

And he ain’t exactly nuts about small-town police who move with Mayberry slowness.

He’s probably best-known for his participation in the Blue Collar Comedy Tour, with his buddy Jeff Foxworthy and Dan “Larry the Cable Guy” Whitney.

His hit CDs include Drunk in Public, They Call me Tater Salad and You Can’t Fix Stupid.

Connect Savannah: I was at the show in Florida the night you got busted. Were you laughing the whole time the arrest was going on, or were you just pissed off ?

Ron White: Normally it wouldn’t have mattered. Had I known exactly how it was gonna work out, I would have been grinning, because it just sold tickets, and books and whatever I sell. My fans don’t care if I get caught with seven-eights of a gram of marijuana. Now, if I got caught with seven-eights of a gram of a dead chick’s underwear, then they’d probably draw the line. But this is pot! And it was pot I had a prescription for.

I was pissed because I was later for my show. It was so petty, and the cops didn’t want to arrest me. It was just one idiot that really has no idea what to do with police resources.

The tipster was your former employee, a pilot?

Ron White: Yeah, full-time. This crazy idiot (expletive expletive) – not to put too fine of a point on it – follows my plane around on a software called FlightAware. If you know the tail number, you can follow any plane. So right before it lands, he calls the cops and tells them it’s a drug plane. They’ve only come out twice out of 40 times, one of them in Vero Beach. And they were just stupid enough to fuckin’ fall for it.

I thought we were tight at one point, because I told him I would give his son a job as his co-pilot, when he got out of prison for stealin’ a fuckin’ plane! I believe in giving everybody a second chance – God knows I’ve needed ‘em. I thought I was solid with this asshole. He’s just a fuckin’ dipshit.

Do you think your association with the Blue Collar thing helped or pigeonholed you?

Ron White: It could not have ever turned out better for me. I was marchin’ to the beat of a different drum when we were filming that stuff – I was just doing clean stuff. But I had clean stuff – not all my stuff is filthy!

Enough people dig it that I don’t give a fuck who doesn’t. If I had a runnin’ start, I couldn’t care less.

What I mean is, Larry’s comedy – not to put too fine a point on it – is for dumb people. That’s the stereotype of “redneck comedy,” and I don’t think what you do is exactly that.

Ron White: No, it’s certainly not. I mean, I am from the South, and I am from a town of less than 700 people, but my voice is real. I’m not making up this voice.

But it worked out so well. Eight years ago, I lived in my buddy’s attic. I was broke, had been doing comedy forever, had IRS debt. My retirement plan was “maybe something neat’ll happen.” Because if it didn’t I’m fucked, right?

I have no regrets. It turned out great, I love Foxworthy. Dan and I got a little sideways over a couple of things, but whatever.

You sometimes host open mic nights in L.A. Why do successful comics do this? Do you really care about “helping the young’uns out,” as you’ve said?

Ron White: Everybody needs a place to work out, and I can help with that. Now, there’s nothin’ I can do to make somebody funny, or guarantee ‘em a future, or take ‘em with me.

I do it for them, but I also do it for me. Because if I host an open mic night, that means I can go up onstage four times. That means I can go back and look at what I did and see what I want to do next. And try new stuff. I have to have that, because I’m re-creating myself – not fast enough, but I do it as soon as I can.

OK, the Barbara Walters question. How similar is the guy onstage to who you are as a person?

Ron White: The closer I could get onstage to who I really am, the more the audiences responded to it. Now, I was never sure why that was, early on. I know what it is now. But they just respond to honesty. So the closer you can get …

If you look at the common denominator of all really famous comedians, whether it be Cosby, Foxworthy, Kinison, Pryor – they were basically true to their own nature. They weren’t really putting on a show. Foxworthy really doesn’t cuss in real life, and he goes to church. He takes his kids to school. He’s a genuinely big-hearted guy. And Kinison was just the opposite, and they’re both famous, and they’ve got nothing else in common except they were true to their nature.

And I try to be true to my nature. There’s really not much difference between me onstage and me offstage. That I can see.