For Lyric Arts soprano Rebecca Flaherty, it's more than a dream 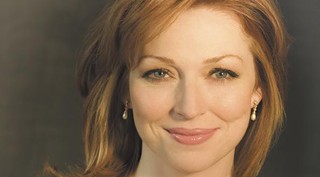 Even though she’s headed for Italy to sing the role of Rosalinde in Die Fledermaus at Operafestival di Roma next month, local soprano Rebecca Flaherty has set her mind to something far more domestic: Bringing live opera to Savannah.

“When I walk around Savannah, and I look at how beautiful it is, it just makes me sad that we don’t have more culture,” Flaherty sighs. “I want a big symphony here, I want a big ballet company here. I want all kinds of things for Savannah.”

The free program, A Night at the Opera, will include arias, duets, and full scenes from well–known operas, from Rigoletto to La Boheme. It’s a regular operatic Whitman’s Sampler.

She is determined to start a full–time opera company in Savannah. “There are some great singers here,” Flaherty says. “I’ve got the personnel – it’s just getting it organized, and getting it funded. Because I can’t ask these people to work for free.”

Flaherty thinks – she knows – there’s local interest in such an endeavor. “When I go to the Met live broadcasts at the movie theaters, they’re packed,” she explains. “You can’t just show up on the day of the performance and expect to buy a ticket. You have to buy it online way in advance. And I think it’s because people in Savannah are really hungry for this kind of music.”

A native of Ohio, Flaherty’s Savannah journey of determination began when she made the quarterfinals at the American Traditions Competition, at the 2009 Savannah Music Festival. “I feel like I’m a different singer now,” she exclaims. “So much has happened since then.”

Last February, she got a chance to work closely with legendary Met baritone Sherill Milnes in New York, and the head of the music department at GSU – an arch Flaherty booster – is a trained opera coach.

“Since my kids are in school,” she says, “and I’m back in school, I just really threw myself into applying and auditioning for everything I could – and getting lots of feedback, figuring out who I am as a singer and what I need to work on.”

What she wants to work on, most of all, is forming a Savannah opera company that includes education and outreach.

“My husband and I have moved around a lot, and I’m tired of moving,” Flaherty says. “I really feel like we’ve found the perfect place for us and our family.

“I don’t really want that kind of a career that would take me away from my family so much. I want to bring this music to people who wouldn’t normally try it, or have an opportunity to try it.

Savannah Lyric Arts: A Night at the Opera

Voice Boxx: The Limit of Our Sight @Unitarian Universalist Church of Savannah