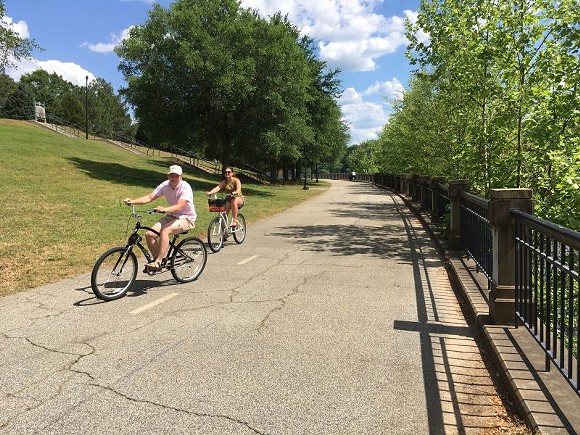 I’VE BEEN thinking about alligators a lot lately. Haven’t we all?

There’s the video of a scuffle between a wild horse and an alligator at a state park in Florida. And the South Carolina family’s encounter with a 9-foot long gator that “climbed a 15-foot staircase, broke open a screen, and barged into their enclosed porch on Easter Sunday,” according to NBC News.

I’ve enjoyed reading accounts of the alligator uprising because, like most people who live in Savannah, my risk of being chomped is minimal. But what if gator attacks were a problem in Savannah? Would we support an effort that would significantly reduce people’s chances of gator-related deaths and injuries?

Or would we oppose it because it would not completely eliminate alligator aggression? I would hope not, but that’s the stance some folks seem to take toward projects that would protect their friends and neighbors from the very real threat of traffic crashes.

I’ve been puzzled by comments about the proposed traffic calming measures for Whitaker and Drayton streets that seem to suggest it is unwise to even attempt to slow traffic and improve safety because, well, cars just move too fast on those streets.

The concept — which was offered by the Savannah Development and Renewal Authority and backed by a coalition of other organizations, but rejected by city council — wasn’t perfect. However, it was a reasonable approach to reducing crashes.

And since it was a temporary pilot project, problems could be identified before any changes are made permanent. We would be able to measure how effective it would be in protecting people from alligators, or in this case, Mustangs, Impalas, and Beetles.

I didn’t see any alligators while I was riding my bike on the RiverWalk trail in Columbus last Friday, but I did see a portion of the trail that seemed narrower than the recommended width for facilities of this type.

I also saw some litter and graffiti. The RiverWalk isn’t perfect, but that didn’t stop the City of Columbus from building the 22-mile trail and it certainly didn’t dissuade people from enjoying it on a warm April afternoon.

I was in Columbus for the annual Georgia Trail Summit, which is organized to “provide connections, share vision and knowledge, offer support, and further the trail projects already happening in Georgia.” And to make this Savannahian jealous of the new trail projects being built in cities across our state.

Conference attendees were among the first to ride a new 1.4-mile connector between the Fall Line Trace and RiverWalk trails, which will officially open later this year.

Imagine a multiuse trail connecting the Armstrong State University campus to River Street. That’s what Columbus residents will soon be able to enjoy.

City officials won’t slow down after this project is done. They intend to create “more than 60 miles of interconnected trails that connect citizens and visitors to the Chattahoochee River, to neighborhoods and jobs, and to each other.”

Columbus City Manager Isaiah Hugley was one of the conference’s speakers and after listening to him, I have no doubt Columbus will reach its goal.

In his city, he said, if a new road is constructed or an existing street resurfaced, bike lanes are installed. That’s the default.

While he may receive occasional criticism for building bike lanes to nowhere, he knows a comprehensive transportation network is assembled mile by mile. Eventually, the connections will come. It does not have to be perfect from the start, but you must have a plan and commit to it.

Atlanta’s BeltLine trail —the brainchild of Ryan Gravel, another speaker at the conference — receives plenty of attention, but other cities are looking west for inspiration. Carrollton’s 18-mile GreenBelt has quickly become a beloved community asset and is being used as a model in Newnan, LaGrange, and elsewhere.

Savannahians, who are tired of waiting for construction of the Truman Linear Park Trail to begin, may take some solace in the fact that folks in Carrolton were once similarly discouraged. The idea of the GreenBelt, “had been around so long, some Carrolltonians were skeptical that the plan would ever be implemented,” according to a Newnan Times-Herald story.

Yet as soon as construction began the town caught trail fever. “From the moment we started pouring concrete, people started using it,” a Carrollton city official told the paper.

In January, heavy rains left several hundred feet of the trail under two feet of water. But the waters receded, debris was cleared, and hundreds of children resumed using the trail to safely walk and bike to school. The GreenBelt isn’t perfect, but the people of Carrollton are happy to have it.